Should the US target 4% growth?

What’s at stake: To contrast with President Obama’s middle class economics, the Republican Party – from Rand Paul’s proposal to repeal the entire IRS code to Jeb Bush’s 4% growth target – is positioning itself as the party that can drastically expand potential growth in the 2016 presidential election.

John Taylor writes that the U.S. economy is not a turtle, but a caged eagle ready to soar if released from the captivity of bad government policy.

Timothy Noah writes that 4% growth has never been anything approaching the norm in U.S. economic history, even during the boom years that followed World War II. “I can go back 200 years,” said Claudia Goldin, an economic historian at Harvard, “and not get anything like this in a sustained manner.” John Cochrane writes that what happened in the past is largely irrelevant, since the US has never experienced free-market nirvana. If you were to look in 1990 at historical Chinese GDP plots to assess whether it is possible for China to grow as it has for the last 25 years, you’d say it’s impossible. Conversely, if you were to look at postwar US data you’d say our lost decade of 2% growth can never happen. If you think that sand in the gears or inadequate infrastructure or not enough stimulus means we’re 20 percent below potential, and potential can grow 2% per year, then 4% growth for a decade follows. 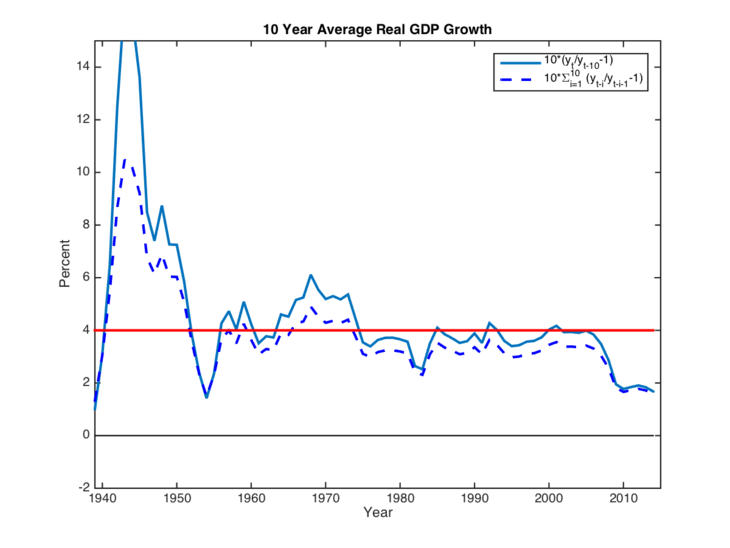 Carola Binder writes that we have a thing for nice, round, kind of arbitrary numbers. The 2 percent inflation target, for example, was not chosen as the precise solution to some optimization problem, but more as a “rough guess [that] acquired force as a focal point.” A 4 percent growth target reduces something multidimensional and hard to define – economic success – to a single, salient number. Making 4% growth the standard for success could also change policymakers’ incentives and behaviors in some perverse ways. Potential policies’ ability to boost growth will be overemphasized, and other merits or flaws (e.g. for the environment or the income distribution) underemphasized.

Paul Krugman tells readers a dirty little secret of economics: we don’t know very much about how to raise the long-run rate of economic growth. Economists do know how to promote recovery from temporary slumps, even if politicians usually refuse to take their advice. But once the economy is near full employment, further growth depends on raising output per worker. And while there are things that might help make that happen, the truth is that nobody knows how to conjure up rapid productivity gains.

Jordan Weissmann writes that potential economic growth is productivity growth plus workforce growth. Right now, neither of those forces is working in America’s favor. Because the Baby Boomers are aging into retirement, the BLS expects the labor force to grow by 0.5 percent per year in the near future, down from the 0.7 rate we enjoyed from 2002 to 2012. To simplify a bit, that means productivity is going to have to jump up by 3.5 percent per year if we want to hit the magic 4.0. [Slightly more nuanced version: Economic growth = increase in output per hour of work x increase in total hours worked. So, theoretically, even if we’re not adding a lot more workers to the economy, growth could rise quickly if everybody started pulling longer hours on the job.]

John Taylor writes that reversing the decline in the labor force participation rate—it fell from 66.0% in 2008 to 62.9% in 2014—would cause a 5 percent increase in employment, or 1% annual growth for 5 years. Some argue that the recent decline in labor force participation is simply due to the baby boom generation retiring, but the decline is larger for teenagers and young adults and has even increased for those of retirement age. Matthew Yglesias writes allowing 1.4 million new workers (out of a population of 140 million employed people) to legally immigrate per year should add about 1 percentage point to the annual growth rate, and put us within striking distance of the 4 percent average.

Gavyn Davies writes that Fed’s central projection of 2.15 per cent for potential GDP growth in the long run implies a productivity projection of about 1.75 per cent. The problem, however, is that this range is not consistent with the actual productivity numbers that have been published at any stage during the present economic recovery. Since 2009, productivity has risen at an average of 1.5 per cent per annum while over the past two years it has risen at only 0.5 per cent. John Taylor writes that reversing the recent productivity slump—it’s been growing at barely 1% recently—would bring productivity growth of 2.5% per year, the average over the past 20 years.

Timothy Noah writes that Bush wants to contrast the slow pace of recovery from the Great Recession under President Barack Obama with the rapid economic growth in Florida during his governorship. GDP growth in Florida exceeded 4 percent in all but Bush’s last year in office.Wonkblog writes that Jeb Bush owes a large amount of that success to the housing bubble that popped as he was leaving office, leaving Florida in deep and prolonged recession.

Paul Krugman writes that Florida fell into a deep slump when the bubble burst, much worse than the nation as a whole — and it has still not made up all the lost ground, so that Florida’s growth rate over the past 16 years is just 1.7 percent, slightly below the national average. This is even more remarkable when you bear in mind that the economy of a favored retirement destination should be growing faster than that of the rest of an aging nation.