With a projected growth of 4.9% in and accounting for nearly 9% of the continent’s GDP, Africa’s travel and tourism industry has incredible potential to help generate growth, create jobs and enable development. Which country is best positioned to benefit most from travel and tourism?

The World Economic Forum’s Travel & Tourism Competitiveness Report 2015 answers this question. It ranks countries on the basis of factors and policies that are currently in place to enable the sustainable development of the sector. The report is also a tool to help countries adapt their policies so that they can achieve their travel and tourism potential.

This year’s most competitive countries in sub-Saharan Africa are: 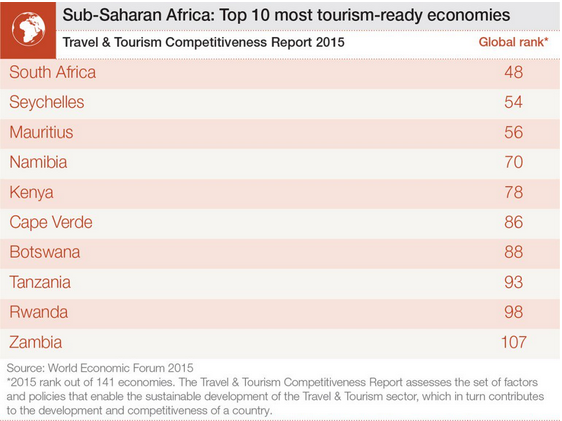 Looking at the results, you will see that South Africa is leading the way, ranking 48th globally and toping the African region, thanks in part to its relatively good infrastructure compared to neighbouring countries. South Africa is still reaping the benefits of the 2010 World Cup, with several sports stadiums that can host significant entertainment events. South Africa also ranked relatively high due to its efforts to reduce red tape and encourage business development in the tourism industry.

While it is clear that Africa has enormous potential with its rich natural and cultural resources, it is still for the most part in the early stages of development for travel and tourism. Its challenges are not linked to its incredible resources, but rather to broader and longstanding issues facing the continent such as infrastructure, health and hygiene and security. Even though Africa received relatively strong results on issues relating to sustainability, the continent should keep sustainability as a central element as they develop. Indeed, deforestation and the loss of habitat and wildlife could become a serious issue for Africa’s tourism industry going forward.

The majority of countries in the region realize tourism’s potential role as an economic opportunity and development catalyst, and have drafted strategic plans. But, the implementation of those plans across countries varies significantly. So what can be done? Aside from investing in its broader issues including infrastructure, hygiene and security, the African continent could focus on two elements, among others, relating specifically to travel and tourism policies.

The first is travel facilitation. In effect, most countries in the region still have significant travel restrictions, and in some cases, such as that of South Africa, there are even discussions of tightening visa policies.

Still, some recent policy changes show a will to make progress. For example, the 15 members of Economic Community of West African States (ECOWAS) have introduced a visa policy that enables free movement of people across member states. Such moves to facilitate travel itineraries that take in more than one country will prove an attraction to international tourists.

International cooperation will also be critical in transforming intra-African connectivity. If you have ever traveled in Africa you’ll know that getting around the continent can be a challenge, often requiring connecting flights from Europe or the Middle East.

Although many air markets between Africa and countries outside the continent have been liberalized, the majority of intra-African aviation remains largely closed, due to restrictive bilateral agreements. A recent report from IATA highlights the benefits of enhancing air connectivity in Africa, noting for instance that a liberalization agreement between South Africa and Kenya in the early 2000s led to a 69% rise in passenger traffic. Similarly, Ethiopia’s numerous bilateral agreements have supported Ethiopian Airlines in becoming one of the largest and most profitable airlines in South Africa.

By building on their competitive advantages and tackling their challenges head on, African nations will hopefully be able to achieve their full travel and tourism potential.

Image: Sun City is nestled in the hills of the Bafokeng nation, 120 km (81 miles) north of Johannesburg. REUTERS/Thomas White