Policymakers worldwide, cognizant of the pivotal role human capital plays in the economic development of receiving nations, increasingly vie to attract “the best and brightest” (Kapur and McHale 2005) in the “global competition to attract high-skilled migrants” (Boeri et al. 2012). Since high-skilled migrants are motivated to move internationally by myriad factors, the efficacy of nation states’ (high skill) immigration policies remain highly contested. The lack of existing evidence is largely due to conceptual and methodological flaws and the paucity of adequate data. Our new research contributes to the literature by overcoming these shortfalls to test the efficacy of high-skilled migration policies with rich panel data. 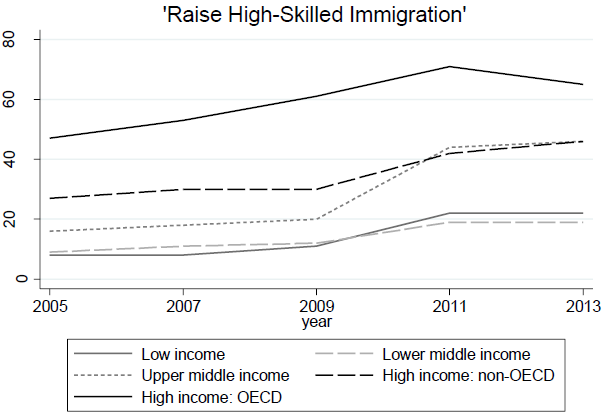 A global rise in high-skilled migrants

As shown in Figure 1, ever more countries are now engaging in the intense global competition to attract internationally mobile human capital, by redesigning their immigration regimes. In 2013, approximately 40% of the 172 UN member states declared an explicit interest to increase the level of high-skilled migration either by attracting foreign or retaining native talent. This share has almost doubled since 2005, when 22% expressed a similar preference. Highly developed destinations are at the vanguard of this global trend, with two thirds of OECD nations having implemented, or in the process of implementing, policies specifically aiming to attract high-skilled migrants. Thus, between the last two census rounds in 2000/01 and 2010/11, the countries of the OECD witnessed an unprecedented rise in the number of tertiary educated migrants of 70% to 35 million (Arslan et al. 2014).

Despite the concurrent rise in the number of high-skilled immigrants worldwide and the proliferation of high-skilled immigration policies, the degree to which high-skilled immigration policies have been effective remains contested (Bhagwati and Hanson 2009). Jasso and Rozenzweig (2009), for example, examine the roles of skill premia and cultural proximity in their study of the skill composition of immigration to Australia and the US. They conclude that “There is no evidence that the differences in the selection mechanism used to screen employment migrants in the two countries play a significant role in affecting the characteristics of skill migration”. Highly-skilled migrants likely value myriad non-economic factors such as the standard of living, the quality of schools, health services, infrastructure, and the presence of a well-established professional network (Papademetriou et al. 2008).

The desirability of high-skilled workers (immigrants) and thus the reason for the proliferation of policies aimed at attracting the highly skilled has been well documented across a number of literatures. Increasing the human capital stock through immigration can raise overall productivity and contributes to economic growth in receiving countries (Boubtane et al. 2014). Indeed, Peri et al. (forthcoming) show that STEM (i.e. scientists, technology professionals, engineers, and mathematicians) workers are the main drivers of productivity growth in the US. High-skilled immigrants also spur technological progress through the creation and diffusion of knowledge and innovation (Kerr and Lincoln 2010). In particular, knowledge that cannot be codified and transmitted through other information channels requires ‘knowledge-carriers’ to physically move in order to transfer knowledge across borders and to create spillovers elsewhere (OECD 2008).

New evidence of the effect of immigration policies

In our new paper (Czaika and Parsons 2015), we examine the degree to which skill-selective migration policies are effective in increasing the inflow of high-skilled labour immigrants and the skill selectivity of immigrant labour flows, having accounted for a raft of economic and non-economic factors. Our empirical (pseudo-gravity) model is derived from, and consistent with, an underlying micro founded random utility model. It is arguably the richest to date in terms of the model being well-specified, whilst importantly also accounting for recent innovations in the empirical literature. In assessing the efficacy of specific high-skilled immigration policies across countries for the first time, our analysis combines three new data collections.

This innovation is important since we can identify the unique effects of individual policy instruments on high-skilled immigration flows over time and across countries, both in isolation and in combination.

Which policies are most effective?

Our results show that points-based systems are much more effective in attracting and selecting high-skilled migrants in comparison to demand-led policies, which include requiring a job offer, clearance through a labour market test or working in a shortage listed occupation.

The provision of post-entry rights, as captured in our model by the offer of permanent residency, is effective in attracting high-skilled migrants. But, overall, this reduces the human capital content of labour flows since ‘roads to permanency’ prove more attractive for non-high skilled workers. Particular policies however, are more effective when combined with other policy instruments. For example, financial incentives in ‘demand-driven’ systems yield better outcomes than when combined with points-based systems.

We find that bilateral agreements that serve to recognise the credentials of diplomas earned overseas and transfer social security rights between country-pairs, foster greater flows of high-skilled workers and improve the skill selectivity of immigrant flows. Conversely, double taxation agreements on net, are found to deter high-skilled migrants, although we find no evidence that such policies alter the overall skill selectivity of labour flows.

Higher skilled wages increase both the overall number of high-skilled workers and the degree of human capital within migration corridors. We find the opposite in the case of higher levels of unemployment. Finally, many of our variables capturing various migration costs – migrant networks, contiguous borders, common language and freedom of movement – while encouraging greater numbers of high-skilled workers, all exert greater effects on non-high skilled workers, thereby reducing migrant skill selection. Our measure of distance, however, has the opposite effect. While deterring both types of workers, it affects the high skilled less, such that greater geographic distances are associated with an improved selection on skills.

High-skilled migration policies are en vogue, in large part due to increasing demand from various businesses lobbying governments for political support in filling labour market shortages with foreign labour. The phenomenon of business-driven labour migration policies is not new, as demonstrated by the guest worker programmes of the 1950s and 60s. The main difference though, is that employers increasingly demand skill sets that often require tertiary education or other highly qualified expertise – those that cannot be fully met by domestic labour alone. Governments have decided to respond to these demands by implementing various types of skill-specific and skill-selective immigration regimes that facilitate the international recruitment of respective workers.

This column represents the first assessment of such policies. We find strong evidence that supply-led systems, i.e. points-based systems, increase both the absolute numbers of high-skill migrants and the skill composition of international labour flows. Conversely, demand-driven systems that are usually based on the principle of job contingency and which are often supplemented by a case-by-case (labour market test) or occupation-by-occupation (shortage lists) assessments of labour market needs, are shown to have rather little, and potentially even a negative effect.

Kapur, D and J McHale, (2005), “Give us your best and brightest: the global hunt for talent and its impact on the developing world”, Center for Global Development, Washington.

OECD (2008), The global competition for talent: Mobility of the highly skilled, Paris: OECD.

Image: People cross a street in Mong Kok district in Hong Kong, October 4, 2011. Mong Kok has the highest population density in the world, with 130,000 in one square kilometre. REUTERS/Bobby Yip