Where do bank loans come from?

Problems in the banking sector played a critical role in triggering and prolonging the Great Recession. Unfortunately, macroeconomic models were initially not ready to provide much support in thinking about the interaction of banks with the macro economy. This has now changed.

However, there remain many unresolved issues (Adrian et al. 2013) including:

In our new work, we argue that many of these unresolved  issues can be traced back to the fact that virtually all of the newly developed models are based on the highly misleading ‘intermediation of loanable funds’ theory of banking (Jakab and Kumhof 2015). We argue instead that the correct framework is ‘money creation’ theory.

Lending starts with banks collecting deposits of real resources from savers and ends with the lending of those resources to borrowers. The problem with this view is that, in the real world, there are no pre-existing loanable funds, and intermediation of loanable funds-type institutions – which really amount to barter intermediaries in this approach – do not exist.

The key function of banks is the provision of financing, meaning the creation of new monetary purchasing power through loans, for a single agent that is both borrower and depositor.

The bank therefore creates its own funding, deposits, through lending. It does so through a pure bookkeeping transaction that involves no real resources, and that acquires its economic significance through the fact that bank deposits are any modern economy’s generally accepted medium of exchange.

This money creation function of banks has been repeatedly described in publications of the world’s leading central banks (see McLeay et al. 2014a for an excellent summary). Our paper provides a comprehensive list of supporting citations and detailed explanations based on real-world balance sheet mechanics as to why intermediation of loanable funds-type institutions cannot possibly exist in the real world. What has been much more challenging, however, is the incorporation of these insights into macroeconomic models.

Our paper therefore builds examples of dynamic stochastic general equilibrium models with money creation banks, and then contrasts their predictions with those of otherwise identical money creation models. Figure 1 shows the simplest possible case of a money creation model, where banks interact with a single representative household. More elaborate money creation model setups with multiple agents are possible, and one of them is studied in the paper. 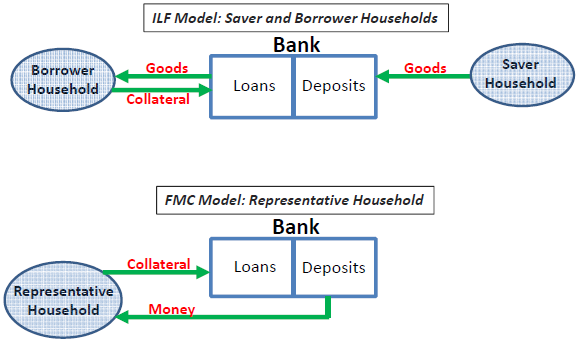 The main reason for using money creation models is therefore that they correctly represent the function of banks. But in addition, the empirical predictions of the money creation model are qualitatively much more in line with the data than those of the intermediation of loanable funds model. The data, as documented in our paper, show large jumps in bank lending, pro- or acyclical bank leverage, and quantity rationing of credit during downturns. The model simulations in our paper show that, compared to intermediation of loanable funds models, and following identical shocks, money creation models predict changes in bank lending that are far larger, happen much faster, and have much larger effects on the real economy. Compared to intermediation of loanable funds models, money creation models also predict pro- or acyclical rather than countercyclical bank leverage, and an important role for quantity rationing of credit, rather than an almost exclusive reliance on price rationing, in response to contractionary shocks.

The fundamental reason for these differences is that savings in the intermediation of loanable funds model of banking need to be accumulated through a process of either producing additional resources or foregoing consumption of existing resources, a physical process that by its very nature is gradual and slow. On the other hand, money creation banks that create purchasing power can technically do so instantaneously, because the process does not involve physical resources, but rather the creation of money through the simultaneous expansion of both sides of banks’ balance sheets. While money is essential to facilitating purchases and sales of real resources outside the banking system, it is not itself a physical resource, and can be created at near zero cost.

The fact that banks technically face no limits to instantaneously increasing the stocks of loans and deposits does not, of course, mean that they do not face other limits to doing so. But the most important limit, especially during the boom periods of financial cycles when all banks simultaneously decide to lend more, is their own assessment of the implications of new lending for their profitability and solvency. By contrast, and contrary to the deposit multiplier view of banking, the availability of central bank reserves does not constitute a limit to lending and deposit creation. This, again, has been repeatedly stated in publications of the world’s leading central banks.

Another potential limit is that the agents that receive payment using the newly created money may wish to use it to repay an outstanding bank loan, thereby quickly extinguishing the money and the loan. This point goes back to Tobin (1963). The model-based analysis in our paper shows that there are several fallacies in Tobin’s argument. Most importantly, higher money balances created for one set of agents tend to stimulate greater aggregate economic activity, which in turn increases the money demand of all households.

Figure 2 shows impulse responses for a shock whereby, in a single quarter, the standard deviation of borrower riskiness increases by 25%. This is the same shock that is prominent in the work of Christiano et al. (2014). Banks’ profitability immediately following this shock is significantly worse at their existing balance sheet and pricing structure. They therefore respond through a combination of higher lending spreads and lower lending volumes. However, intermediation of loanable funds banks and money creation banks choose very different combinations.

Intermediation of loanable funds banks cannot quickly change their lending volume. Because deposits are savings, and the stock of savings is a predetermined variable, deposits can only decline gradually over time, mainly by depositors increasing their consumption or reducing their labour supply. Banks therefore keep lending to borrowers that have become much riskier, and to compensate for this they increase their lending spread, by over 400 basis points on impact.

Money creation banks on the other hand can instantaneously and massively change their lending volume, because in this model the stocks of deposits and loans are jump variables. In Figure 2 we observe a large and discrete drop in the size of banks’ balance sheet, of around 8% on impact in a single quarter (with almost no initial change in the intermediation of loanable funds model), as deposits and loans shrink simultaneously. Because, everything remaining the same, this cutback in lending reduces borrowers’ loan-to-value ratios and therefore the riskiness of the remaining loans, banks only increase their lending spread by around 200 basis points on impact. A large part of their response, consistent with the data for many economies, is therefore in the form of quantity rationing rather than changes in spreads. This is also evident in the behaviour of bank leverage. In the intermediation of loanable funds model leverage increases on impact because immediate net worth losses dominate the gradual decrease in loans. In the money creation model leverage remains constant (and for smaller shocks it drops significantly), because the rapid decrease in lending matches (and for smaller shocks more than matches) the change in net worth. In other words, in the money creation model bank leverage is acyclical (or procyclical), while in the intermediation of loanable funds model it is countercyclical.

Banks are not intermediaries of real loanable funds

To summarise, the key insight is that banks are not intermediaries of real loanable funds. Instead they provide financing through the creation of new monetary purchasing power for their borrowers. This involves the expansion or contraction of gross bookkeeping positions on bank balance sheets, rather than the channelling of real resources through banks. Replacing intermediation of loanable funds models with money creation models is therefore necessary simply in order to correctly represent the macroeconomic function of banks. But it also addresses several of the empirical problems of existing banking models.

This opens up an urgent and rich research agenda, including a reinvestigation of the contribution of financial shocks to business cycles, and of the quantitative effects of macroprudential policies.

Jakab, Z and M Kumhof (2015), ““Banks are not Intermediaries of Loanable Funds – And Why This Matters”, Bank of England Working Paper Series No. 529, May.

Image: The Thames flood barrier is seen in front of London’s financial district of Canary Wharf at dawn. REUTERS/Russell Boyce