Where is the growth in Indian manufacturing jobs?

The slow growth of Indian manufacturing is a concern for many observers of the Indian economy, and India’s manufacturers have long performed below their potential. Although the country’s manufacturing exports are growing, its manufacturing sector generates just 16% of India’s GDP, much less than the 55% from services. Since its liberalisation, India has undertaken many trade reforms to increase its global integration, and the country has invested in domestic infrastructure projects to improve its regional connectivity. These trade reforms have impacted many parts of the economy (e.g. Topalova 2010, Goldberg et al. 2010), and they seem to have held special importance for informal firms (e.g. Nataraj 2011, Thomas 2013).

In a recent paper (Ghani et al. 2015) we document and analyse two intriguing and under-appreciated facts about India’s manufacturing growth. The first fact, which closely relates to the observations of Thomas (2013), is that much of the manufacturing sector’s employment growth that has occurred since 1989 has come in the form of informal establishments in tradable sectors. We define tradable industries at a three-digit industry level using high export and import ratios to gross output levels. While it may not be surprising that manufacturing employment growth has followed from the improved connectivity and trade reforms, the degree of imbalance towards the informal and tradable sectors is.

Figure 1 shows the exceptional increase of employment in informal tradables by over 10 million workers, equivalent to the entire net growth of the manufacturing sector. This group expanded from 19% of Indian manufacturing employment in 1989 to 39% by 2010. This rise in informal tradable employment coincides with a strong decline in non-tradables. Beyond the imbalance to non-tradables, the concentration of the tradables growth in the informal sector is also intriguing. It suggests that the growth in traded industries is not due to plants achieving larger economies of scale and shipping goods at a distance, as might have initially been imagined, especially in light of the 1990s reforms that made it easier to export, import, and increase plant size. 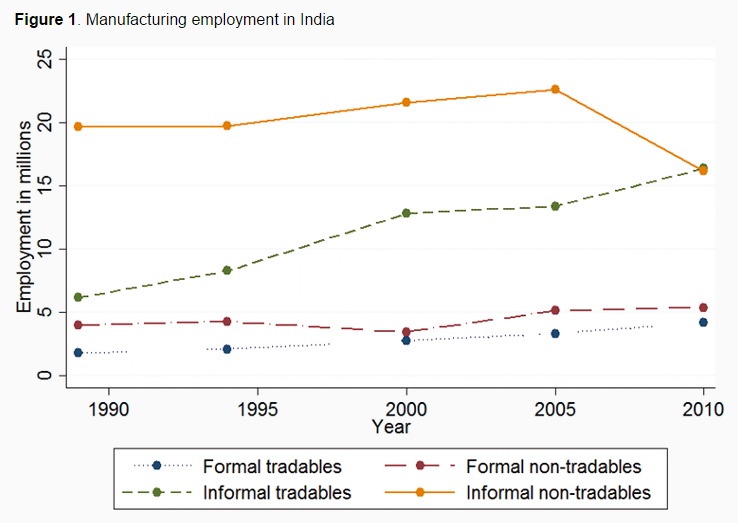 The second trend that we identify, which can be seen in Figure 2, is the particular development of one-person enterprises within this informal tradables growth. These one-person firms can also be defined as self-employed manufacturers. Tradables establishments with one employee grow from 6% of the informal sector workforce in 1989 to 21% by 2010. This trend is not present in non-tradable industries, and the growth dwarfs other size categories. This trend is particularly surprising given that we would expect the trade and investment reforms that India underwent in the 1990s to more strongly impact larger firms, as microenterprises in particular are known to face significant hurdles in competing in export and other non-local markets (Gonzalez 2014).

What explains these facts?

Our analytical work digs through the data to learn more about these two patterns and their origin. The rapid urbanisation of the informal sector appears to be the most important factor. Essentially all of the net employment growth in Indian manufacturing over the past two decades occurred in urban areas. From 1989 to 2010, employment in informal tradables increased by a little over 10 million jobs, and almost 8 million of these jobs were developed in urban establishments, as can be seen in Figure 3.

Thus, numerical accounting suggests a key role for urban areas, and the urban share of informal tradables employment rose from under one-third in 1989 to over 60% by 2010. This connects strongly with the broader trend for the informal sector to be moving into urban areas in India (Ghani et al. 2012, 2014). Another factor pointing to the importance of urbanisation is the very close timing of the urban increases with those of the aggregate changes. Multivariate regressions analyses further confirm this importance of urbanisation at the district level for explaining the development of one-person firms. Our work suggests that there are features particular to urban areas that facilitate the growth of informal microenterprises in the face of high urbanisation rates.

Beyond urbanisation, we also consider other factors like the rapid expansion of female business ownership (e.g., Ghani et al. 2013), trends related to subcontracting (Mukim 2013), and “push” entrepreneurship – entrepreneurs who start businesses out of necessity rather than growth desires. The evidence suggests that these factors could play a role in these patterns, but that the size of their effects is not sufficient to be the primary force.

More broadly, we do not establish a strong connection to many state- and district-level traits, which suggests that the documented features are much more general in scope than a single policy or explanatory factor (e.g., education, infrastructure). Similarly, we connect the one-person establishments to lower wage opportunities in tradable industries, but the tradable nature of the work appears important and to not be a proxy for other industrial traits like financial dependency or materials intensity. It is apparent that the apparel sector plays an important role, but the effects are also broader than it alone.

The vast informal sector in India affects everything from poverty levels to the allocation of activity in the economy and beyond, so greater insights into its functioning are absolutely vital. There are many useful ways that this analysis can be extended in future work to address this. We generally need to learn more about agglomeration economies and how these micro enterprises connect with each other and with formal firms. The one-person establishments are becoming increasingly prevalent—over one-third of informal sector employment in 2010—and their causes and consequences are not well understood. We particularly intend to explore going forward how informal firms connect into local supply chains and input-output networks, which can propagate shocks (e.g. Acemoglu et al. 2015). Additionally, we need to examine whether these trends persist in the service sector too, or if they are specific to the production processes present in manufacturing. Finally, we need to learn more about how changes in technology impact and shape these trends.

Ghani, Ejaz, Arti Goswami, and William Kerr, “Highway to Success: The Impact of the Golden Quadrilateral Project for the Location and Performance of Indian Manufacturing”, Economic Journal(2014), forthcoming.