Which country is the happiest in the world?

The Swiss are the happiest people in the world, according to the findings of the 2015 World Happiness Report. All five Nordic nations are in the top 10, the US comes in at 15th — a place behind Mexico — and smaller countries dominate the top of the table. 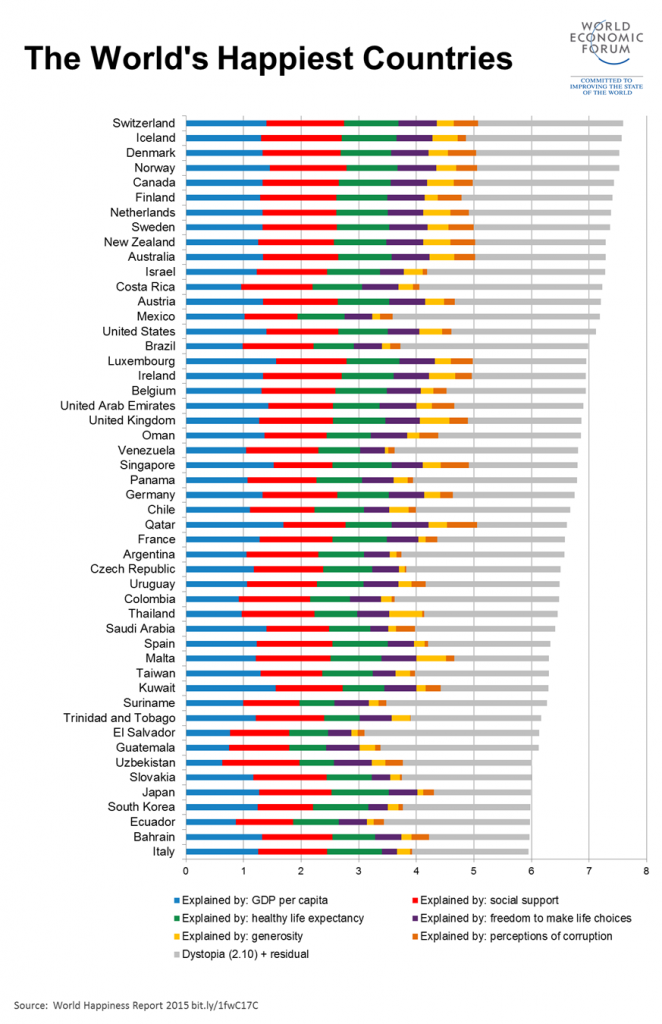 The Report is produced by the UN’s Sustainable Development Systems Network and scores nations on responses to the ‘life evaluation’ questions collected in the Gallup World Poll. These include variables such as real GDP per person, healthy life expectancy, corruption levels and social freedoms.

“Increasingly happiness is considered a proper measure of social progress and goal of public policy,” the Report’s authors say, noting that there is a UN Resolution on happiness and well-being that requires members to collect such data.

5 takeaways from the World Happiness Report

1. The average score of the top 10 is more than twice as high as that of the bottom 10.

2. Income differences (the blue bars in the chart) explain up to a third of the gap between the top and bottom.

3. Social factors and the networks that connect people are the next most important (the orange bars in the chart.)

4. In a study of the impact of recession on happiness, the Report’s authors find that even though the economies of Iceland and Ireland were decimated during the financial crisis, these countries’ happiness scores remained high because their citizens have some of the strongest social connections in the world.

5. The Report includes a study from neuroscientists who find strong evidence that you can increase your happiness in the following ways: practicing mindfulness training or meditation, taking a less commercial approach to life, and giving or volunteering.

Image: A participant smiles as she applies makeup for a friend during the 22nd Street Parade dance music event in Zurich August 10, 2013. REUTERS/Arnd Wiegmann