Why are the UK’s long-term yields so low?

Why are UK long-term yields so low? There is much debate about what financial markets are telling us about our long term economic future. In the UK, the yield on 25-year nominal government debt is around 2¾% which – recent moves not withstanding – is exceptionally low by historical standards (Chart 1). 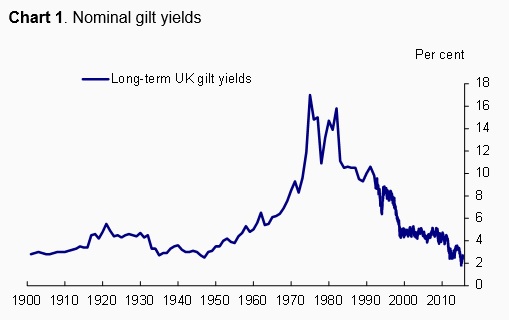 There are two different world views that could explain the exceptionally low levels of gilt yields.

What does the evidence show?

The Pessimistic View on Prospects

Because some of the decline in nominal yields over recent years coincided with a marked and unexpected decline in headline inflation in the UK, a natural question to ask is whether or not we have experienced a material shift lower in long-term inflation expectations. Judging by the behaviour of measures of inflation expectations derived from index-linked gilts, markets are attaching a low probability to the idea that the current weakness in inflation will prove permanent (Chart 2). That is consistent with the view that the majority of the decline in inflation over the period since the middle of 2013 can be accounted for by factors that are unlikely to have permanent effects on inflation, particularly falling food and fuel prices and the appreciation of sterling. Recent data has offered some additional support for this view. Headline inflation has picked up a little, from -0.1% in the year to April to +0.1% in the year to May. Perhaps more importantly for assessing the future path of inflation, wage growth has picked up to 2.7% annual growth in the data for April 2015.

Another interpretation of the current low level of yields is that financial market participants are sceptical that the return on investment – and by implication potential output growth – can return to pre-crisis norms. In the long term, the most important determinant of potential output growth is productivity growth, which is in turn determined by the rate at which new ideas are generated and implemented. Given the very disappointing productivity performance of the UK over the past 7 years, it would perhaps be understandable were financial markets to have lost hope that productivity growth would ever return. Perhaps they agree with those who argue that recent innovations cannot contribute as much to productivity growth as historical ones such as the electric light bulb, the internal combustion engine and indoor plumbing once did.1

But human history has had many periods in which pessimism about innovation and technological progress has been proven wrong, dating at least back to Malthus. There is much by way of exciting innovation that has yet to be fully exploited.2 3D printing is transforming the R&D process by vastly increasing the capability to produce prototypes. Advanced robots are being developed that will allow increased precision and safety in their use, thus increasing our ability to automate many routine activities. Firms are learning how to harness the power of Big Data, which will allow them to personalise their products better and reduce waste.

The combination of an impressive stream of ideas, and a financial system stable enough to facilitate their implementation means I am reasonably confident that productivity growth will return at some point. Moreover, I think it is reasonable to expect that resumption in productivity growth to come over the next year or so as the continued narrowing of slack in the labour market raises the incentive to increase output by increasing output per worker. But – as many a forecaster of productivity has learned – picking exact inflection points for macroeconomic variables can be difficult, so the degree of uncertainty around the timing of this is high.

Another pessimistic explanation is that market participants believe that the cyclical forces which currently warrant very low levels of Bank Rate will persist for decades to come. Put another way, that we are entering a period of secular stagnation or chronic demand deficiency – a theme that has been frequently debated in contributions to Vox EU.3

My own view is that although the headwinds which have characterised the economy in the years since the crisis have proven persistent, it would be overly pessimistic to have as one’s central case that they will in effect be permanent. Indeed there are now nascent signs that some of the headwinds affecting the UK economy have already begun to ease. For some time, the Bank’s agents have been reporting steadily improving credit conditions (Chart 3) for businesses, and our survey of credit conditions suggests a similar picture for households. Moreover, the continued strength of business and consumer confidence suggest an underlying strength in domestic demand growth.

Chart 3. The availability of credit to firms has improved

The precautionary view focuses on a variety of explanations for low long term yields which are distinct from participants’ central expectations for the economy. One argument is that we are witnessing a pattern that is typical of a balance sheet recession. Recessions that are preceded by a large build-up of credit tend to be followed by more severe and prolonged downturns. One reason is that economic actors tend to focus on reducing debt levels to the detriment of projects that would otherwise be expected to have a positive net present value. In such a situation the interest rate required to clear the market for savings and investment can be very low indeed.4

The behaviour of the economy over the period since 2008-09 does bear the hallmarks of a balance sheet recession in which increased precaution at individual and sectoral levels was the driving force of the aggregate picture: first by financial institutions who reduced the supply of credit to the real economy; then by the businesses and households who simultaneously became more pessimistic about the outlook and reassessed their need to maintain their own stock of liquidity. When public sector balance sheets reached their limits, it was the turn of deleveraging at a national level through fiscal consolidation, a process which is likely to continue for some time to come in the UK and euro area.

The crucial element of this interpretation is that the impetus to deleverage won’t last forever. Indeed it seems as though some of this precautionary desire to rebuild balance sheets is starting to ease. For example, firms have slowly but surely been increasing the amount they invest relative to the amount they save (Chart 4).

The fifth interpretation is that although financial market participants do not have a particularly gloomy central expectation for the path of the economy over the coming decades, they do attach significantly more weight to the downside risks than they did prior to the crisis.5 Increased awareness of the potential for rare economic disasters can put downward pressure on low risk-free rates, and drive a wedge between them and the return on risky assets (including lending to financial institutions). I think it’s reasonable to put some weight on this interpretation: it wouldn’t be surprising if after the Great Recession, the Eurozone crisis and a series of geopolitical shocks, agents are more risk averse.

A final precautionary explanation is that “term premia” (the positive or negative compensation that investors require to invest in a longer dated security in addition to the returns that could be expected from rolling over short term investments) have declined. Because they are by their nature unobservable, term premia must be estimated. Chart 5 shows one estimate of the effect of term premia on UK government bond yields over the period since August of last year, using a technique based on that of Adrian, Crump and Moench (2013). More information about how these estimates are arrived will soon be available on the Bank’s new staff blog,6 but the main message is that over this period term premia were a big driver of the move lower in yields.

Chart 5. Term premia have been a significant driver of the decline in yields

There are several potential explanations for declining UK term premia. One that has featured heavily in our market intelligence gathering is spillovers from international monetary policy actions.7 The ECB and the BoJ will purchase assets equivalent in value to all of the net issuance by advanced economy governments over the next 15 months. Of course these actions should not be thought of as exogenous, rather as precautions taken by policymakers in response to the headwinds facing the euro area and Japanese economies.

That these large flows (or the anticipation of them) would have spillover effects on borrowing rates in the UK should not be a surprise. Given that UK government bonds and other government bonds are (to varying degrees) substitutes, it is natural to expect their prices to co-move – in much the same way that if the ECB were to buy $1trn of Eurozone butter we might expect the price of British margarine to increase. By much the same logic, it is plausible that the recent move higher in both Eurozone and gilt yields is an unwinding of some of the initial price effects that followed the commencement of ECB quantitative easing.

The low level of long yields in the UK could be interpreted as financial markets expecting a very prolonged period of low growth or low inflation, or both. This would seem an overly gloomy prognosis for three reasons: first, the factors currently pulling down on inflation should not be expected to do so permanently; second the headwinds currently affecting demand in the economy should continue to gradually ease over the coming years; and third a return to productivity growth should facilitate potential output growth over the long term.

Instead it seems likely that the current low level of yields reflects the influence of a set of precautionary actions taken by public and private participants in financial markets. Since the onset of the financial crisis, households, firms and governments have had an increased desire to reduce their debt; financial market participants have sought greater protection against downside risks; and international central banks have embarked on asset purchase schemes in response to economic developments. These are legitimate reasons for the low level of long yields in the UK. But they shouldn’t be mistaken as indicating that the headwinds currently affecting the nominal and real economy will persist for decades to come.

Barro R (2006), “Rare disasters and asset markets in the twentieth century”, The Quarterly Journal of Economics 121 (3)

1 As outlined in Gordon (2012). Gordon (2014) emphasises that this slowdown in innovation will be one contributing factor to a generalised slowdown in growth that is also driven by demography, educational attainment, inequality and a public sector debt overhang.

5 Barro (2006) shows that the potential for rare economic disasters can explain low risk-free rates, and drive a wedge between them and the return on risky assets (including lending to financial insitutions).

7 For more information on the Bank’s market intelligence programme, see:http://www.bankofengland.co.uk/markets/Documents/marketintelligence/char…

This is how the top cryptocurrencies performed in 2021

But it paints a downbeat assessment of economic growth, given the ongoing pandemic and higher rates of inflation.