Why austerity was the wrong policy for the UK, part 3

Like any skilful controversialist, Niall Ferguson knows that when you have lost the main battle, it is time for diversionary tactics.

His latest charge against me is that I “changed my predictions after the fact.” He quotes me as saying in November 2010 that Chancellor of the Exchequer George Osborne’s policies doomed the United Kingdom to “years of interminable recession.” He claims that the pickup in UK GDP growth in 2013 – nearly three years after Osborne’s austerity budget of June 2010 – refutes my prediction.

But this is nonsense, and Ferguson must know it. Has he never heard of ceteris paribus? Every prediction in economics is conditional on some things staying the same. If he took the trouble to read what I said in November 2010, he would see that my prediction was conditional on existing policies.

In fact, the policies changed. The second bout of quantitative easing, from October 2011 to July 2012, injected £175 billion ($272 billion) into the economy. And the austerity measures were sufficiently relaxed after two years for Osborne to be called a “closet Keynesian.” But Osborne’s about-face did not come – and this is the point – before his original policies had done considerable harm.

Another diversionary tactic is to call in aid Alastair Darling, Labour’s Chancellor of the Exchequer in the crisis years of 2008-2010. The only difference between the Darling and Osborne approaches, writes Ferguson, was “the timing of austerity,” as if this difference were not crucial. But it is, because it was Osborne’s first two years that did the damage.

In his budget statement of March 24, 2010, Alistair Darling said:

“I know there are some demanding immediate cuts to public spending. I believe such a policy would be both wrong and dangerous. To start cutting now risks derailing the recovery – which is already bringing down borrowing more rapidly than expected. To go faster, in the face of uncertainty, would mean taking a huge risk with people’s jobs, incomes and our future. I am not prepared to take that risk.”

So he postponed the cuts until 2011 and plotted a shallower deficit-reduction path.

This brings us to the heart of the matter. Ferguson’s case against the Keynesians hinges crucially on the assertion that the Osborne package of 2010 was necessary to restore business confidence, and that it duly did so: “the more Keynesians like Skidelsky and Krugman talked about the ‘confidence fairy,’ the more confidence returned to UK business.”

The factual basis for this assertion was that business confidence after May 2010 (when Osborne took over the Treasury) never sank to “where it had been throughout the past two years of Gordon Brown’s catastrophic premiership.” Ferguson now admits that he was wrong – that “confidence fell somewhat in the first two years under Prime Minister David Cameron” – but urges in mitigation that a “single factual error” does not invalidate “an entire argument.” In fact, Ferguson’s entire case rests on this single factual error.

The graph below shows very clearly how closely confidence rises and falls with GDP growth. This explains why confidence fell to the low point that it did during Gordon Brown’s premiership: just look at what was happening to the economy as a result of the global collapse. Indeed, the fit is even better than the graph suggests, because the GDP figures shown for 2011-2012 have been revised upward – that is, they were expected to be worse. 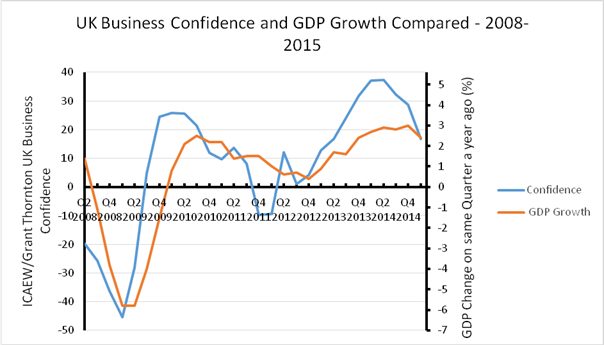 Ferguson says that I cannot prove that austerity lowered UK GDP growth, or that it was responsible for the dip in confidence. And he is of course right: Economists cannot prove anything. But that does not mean that people are entitled to talk nonsense. I have made an economic argument that taking money out of an economy in a slump will damage GDP growth, thereby damaging business confidence as well. I have provided factual evidence that this might well have happened. As far as I can see, Ferguson has provided no argument at all, while the factual evidence on which he relies to controvert my argument was wrong.

Everything you need to know about London's transition to net zero

Climate-conscious measures are already in place across London - however, from transport to skills there's work to be done.

Winners of the Earthshot prize, including Milan and Costa Rica were awarded £1 million to support their efforts to improve their sustainable practices.

How pockets of Scottish forests could save red squirrels

Climate action must happen 'for our people, not to them', cities say

From drones to Harry Potter memes: how countries convinced people to wear masks