Why we need to rethink the informal economy

‘Informality’ troubles policymakers in developing countries because it is seen as being associated with low productivity and poverty. Cross-sectional differences in rates of informality do seem to suggest that development is associated with declining informality (see Figure 1). And yet, despite these expectations, informality as conventionally measured has been exceptionally persistent (Figure 2). This seems to go against the basic predictions of development economics. If informality is the ‘problem’ and growth the solution, what is one to do when growth doesn’t seem to be solving the problem? Should one make direct attempts at reducing informality? 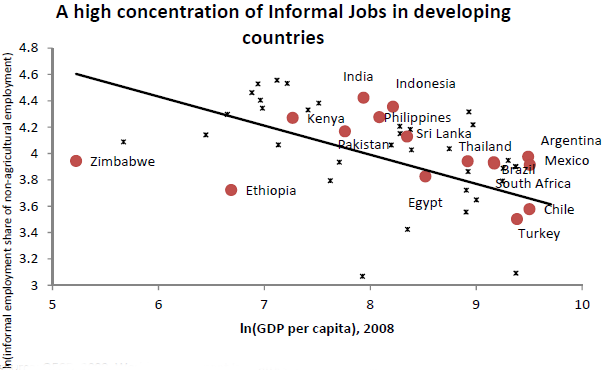 We think this is the wrong way to look at things. The key to policymaking towards informality is twofold. First, to specify more basic objectives, such as efficiency and equity, which transcend informality – informality and its persistence in itself is neither good nor bad. Second, to disaggregate informality into policy-relevant categories, rather than take it as an undifferentiated lump and then gauge policies by their impact on its magnitude.

There are many conceptual and statistical definitions of formality and informality, but one pole of consensus is that the distinction can be made only relative to some set of state regulations and laws (Guha-Khasnobis et al 2006, Kanbur 2015). Legal requirements on enterprises, to register, pay taxes, and provide certain benefits to their workers, are often a starting point in concept and in official statistics (ILO 2013). However, while ‘formality’ is unambiguously defined as falling within the ambit of a set of laws and complying with them, informality, defined as its complement, has at least three faces: Evaders, Avoiders, and Outsiders. Evaders are covered by the law but do not comply. Avoiders adjust so as to put themselves outside the remit of the law. Outsiders are those simply not covered by the law.

To make things concrete, suppose the law requires all enterprises with 10 or more workers to register and to provide certain benefits to workers. Then those enterprises which hire more than 9 workers and register will make up the formal sector. All other enterprises are therefore informal – but there are different types of informality. An evader would be an enterprise with 15 workers that doesn’t register. An avoider would be a firm that would have hired 11 workers without the regulation, but now chooses to hire only nine. An outsider would be an enterprise that in the absence of the law would have fewer than nine workers, which is simply unaffected by the legislation.

This is not a fanciful example. Registration of manufacturing enterprises employing 10 workers or more is a requirement of India’s Factories Act. Using two complementary data sources,1 Table 1 presents estimates of the numbers of enterprises and workers in each of the four categories: Formal (A), Evaders (B), Avoiders (C), and Outsiders (D). We assume that all nine-worker enterprises are avoiders, which overestimates category (A) and correspondingly underestimates category (D). The Table highlights some key empirical realities:

To see why all this matters for policy, consider three dimensions of regulatory policy in this framework: the regulatory threshold, the cost to the firm of complying with the regulation, and the intensity with which it is enforced. It can be shown (under certain conditions) that:

Clearly, focusing on the aggregate level of informality as a key indicator for prediction and for normative policy (the ‘reduce informality’ mantra) is problematic. The disaggregated composition of informality proves a better guide, and for policy it is best to focus firmly on the objective and the impact on it of each policy instrument.

Further, a major complaint of many NGOs is that the regulation issue is irrelevant for the vast majority of the informal sector – the outsiders. Evidently, their numbers and their outcomes are wholly unaffected by the costs of regulation and its enforcement. For them, a whole other set of policies are relevant and important, policies which will directly raise their productivity. Financial inclusion, and changing the practices of financial institutions which exclude them from financial services, becomes the key policy challenge.

The question of informality is prominent not only in discussions of labour and enterprise regulation, but in the policy discourse on taxation. Informality is almost always at or near the top of lists of tax challenges in developing countries. ‘Taxing the informal economy‘ leads the African Development Bank’s tax priorities, and ’reducing informality‘ is often seen as a central objective of tax reform. But here too this proves an inadequate guide for analysis and policy design (Kanbur and Keen 2015).

In so far as any precise meaning is given to the term in discussions of taxation, informality is usually taken simply to mean non-remittance of tax due – failure to pay. But there are all kinds of reasons why a firm or individual might pay no tax. Maybe they are simply below the threshold above which they are legally obliged to; or maybe they are evading. Might not why no tax is paid matter for policy making at least as much as the fact of it not being paid? And how should tax systems be structured when it is recognised that their design may affect not only how much tax is paid, but the different ways in which it is not paid? These questions lead, in our view, to a more useful strand of analysis than generalities about reducing informality.

Take for example the VAT. This typically has some threshold level of sales above which the enterprise must pay tax on all its sales, including those below the threshold (with credit for tax charged on its own purchases). In addition it faces some largely fixed compliance costs in remitting tax. Firms differ, suppose, in the maximum amount they can sell, though they can choose to sell less than that. They can also choose to remit less than the amount due on their true sales, but at some cost in terms of potential penalties (and maybe others too). A few reasonable assumptions then imply that firms fall into five categories, ranging from the smallest to the largest in pre-tax sales (Table 2) – four of these correspond to those above, with now an additional distinction between those who wholly or only partly evade.

Consider the policy problem of setting the tax threshold with the objective of improving social welfare, defined in the usual way as after-tax income plus government revenue weighted to reflect the marginal social value of tax revenue. We show that changing the threshold does not change measured aggregate informality or tax revenue; some simply flip between being adjusters and avoiders (Kanbur and Keen 2014). But it does change output (through the impact on those hovering below the threshold), and hence also affects welfare.

Juxtaposing labour regulation and tax raises the important but neglected question of how to think about informality when there are multiple sets of regulations, as is commonly the case. What is informality then? Informal relative to all obligations or to some? And how does optimal policy in one dimension of regulation depend on the situation in the other dimension? Kanbur and Keen (2014) show that answers to these questions are possible, but have little to do with ‘reducing informality’.

Use of the term informality is not going to end anytime soon. But it is important to be clear about the concept and its definition, especially in the context of policy. An aggregative notion and measure of informality captures some aspects of reality, but risks obscuring more than it reveals. Sensible policy in some cases already recognizes this – tax administrators, for instance, shape their actions not in terms of reducing informality but of tailored interventions across different categories of taxpayer, often segmenting them by size along much the same lines described above (IMF 215). It is in understanding and addressing the varieties of informality, not agonizing over some aggregate, that real progress can be made.

Authors: Ravi Kanbur is T. H. Lee Professor of World Affairs, International Professor of Applied Economics and Management, and Professor of Economics at Cornell University. Michael Keen is Deputy Director of the Fiscal Affairs Department of the IMF

Image: A vendor hands change back to a customer at her market stall with price tags marked in Cuban pesos in Havana October 23, 2013. REUTERS/Desmond Boylan.