According to the 2014 Edelman Trust Barometer, only 56% of people in the United Kingdom trust business, a point Sir John Peace, Chairman of Standard Chartered, raises in his article “Rebuilding trust through action” as part of the first annual Conference on Inclusive Capitalism, held in 2014. He then notes that based on the British Social Attitudes survey, between 1983 and 2013, trust toward banks dropped from an impressive 90% to paltry 19%. Although we have seen a slight recovery in public perception toward banks in recent years, it is clear that there is still a significant amount of work to do in the financial services sector as a whole. 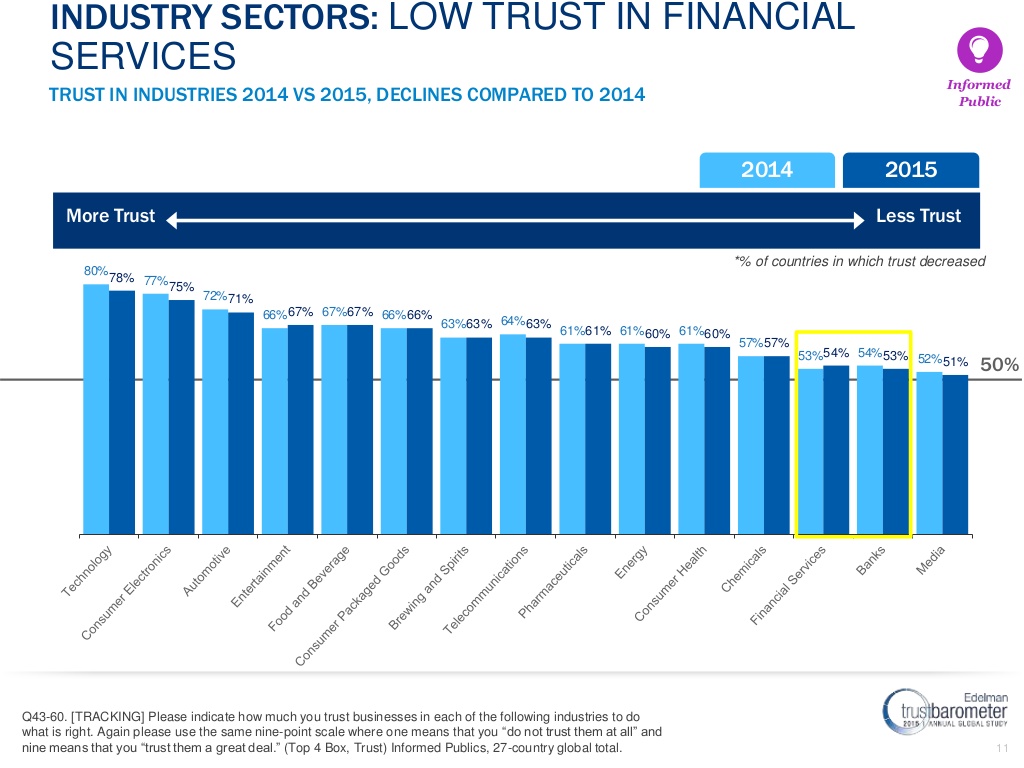 In the past, top talent from universities across North America and Europe viewed financial services as a first-choice career destination. But this has changed in recent years. For instance, in 2007, 46% of London Business School MBA graduates entered jobs in financial services. In 2013, 28% of LBS students pursued this route: certainly not a poor turnout, though clearly not as significant as just several years prior. An Economist article entitled “Banks? No, thanks!” addresses this shift away from financial services as an industry of choice for young talents, closing with the view that, despite patchwork attempts to change workplace culture, “all this may not be enough.”

But there is tremendous social importance to financial services, a point that has been lost in many people’s unequivocal rejections of the sector as being focused solely on self-interest and the pursuit of profit at the expense of clients’ betterment. In his own Conference on Inclusive Capitalism contribution, penned in 2014, Unilever CEO Paul Polman writes “Being ‘less bad’ is no longer sufficient. It’s about moving from share value to shared values where business sees itself as part of society, not separate from it.” Although financial services has a long way to go in improving its image, leaders such as Polman and Peace are spurring change that is now being furthered through the efforts of visionaries including Lynn de Rothschild, Diana Fox Carney and Mark Carney with the Coalition for Inclusive Capitalism, which held its second annual event in London, on June 26, 2015.

And yet, as a Director of Gen Y Inc., and in hundreds of discussions with young leaders across North America and Europe, seldom do I hear that individuals enter this sector because of the importance of serving others, of spurring economic growth, of critically examining and playing a leading role in how wealth is redistributed. In short, on how ensuring that capitalism is as inclusive and sustainable as can be. Instead, most bright emerging young professionals enter financial services for reasons of self-interest, more because this is a route accepted by others than through deep examination of the reasons why financial services matter. This is not surprising, considering myopic recruitment practices focused on young people’s superficial preferences (financial security and status) than on reasons with actual depth: the ability to serve others through thoughtful leadership and the provision of high-quality and accessible goods and services.

In order for financial services to truly attract the brightest, most critical and creative young talent – with the list including banks, hedge funds, private equity shops, insurance companies and so forth – they would benefit through the consideration of the following actions:

1. Engage in organizational reflection, across all generations of employees, on questions pertaining to their core roles in society. Although these activities might not spur short-term financial return, they’re paramount to the viability of the sector in the long-term. All staff, starting with management and working its way down to grassroots levels with interns, new graduates and other young professionals, should be full participants in this exercise.

2. Align workplace culture with the philosophical, economic and social roles determined above. If financial services businesses are to be truly responsible, then they must treat their employees responsibly. That is, employees should be stretched in ways that make the most out of their capabilities, though not to the point where mental health suffers and efficiency declines. A fundamental rethink of workplace culture, driven by a combination of quantitative and qualitative data, is required in order to arrive at a thorough assessment of culture.

3. Empower employees – and not just corporate social responsibility units – to serve as ambassadors for their companies wherever they go, emphasizing the values and roles served by financial services. Traditional CSR initiatives are no longer sufficient for demonstrating that financial services companies are truly invested in the good of society. The transformations arrived at through the first two points should be communicated authentically, rather than through standardized job descriptions and recruitment fair booths emphasizing problem-solving work and career development opportunities.

The shift I’ve described is not a matter of several months of work; it is one of years. But it is possible, and is a means to better identifying and engaging the next generation of leaders in finance. As Sir John Peace remarks in the same essay mentioned above, “First and foremost, for capitalism to regain its vigour and deliver its many benefits, business needs to return to its core role – that of fuelling economic activity, creating jobs and generating wealth.”

Financial services are at the centre of this dynamic, and society’s young professionals with integrity, care for others and responsibility towards the greater good should consider financial services not just as a job or career, but a calling. Indeed, financial services can regain and then maintain its enviable position in the competition for talent, but for reasons of real depth and value.

Author: Emerson Csorba is a Director of Gen Y Inc., University of Cambridge Trust Scholar and a World Economic Forum Global Shaper. He was a participant in the 2015 Conference on Inclusive Capitalism.

Image: Businessmen and visitors enjoy the good weather on the stairs under the Arche de la Defense in the financial district of la Defense near Paris.   REUTERS/Charles Platiau