5 things you didn’t know about the gender pay gap

The gender pay gap in the Western world is back in the spotlight, after the British government announced all large businesses will have to publish details of the difference between earnings for men and women. About time, many will say. Although this year marked the 45th anniversary of the country’s Equal Pay Act, women still earn on average 20% less than men. That makes the UK’s pay gap the sixth largest in the European Union.

The causes behind the persistent gap are complex, and a compulsory gender pay audit can only ever go some way to closing it. But as Lindsay Pattison argued on this blog a few weeks ago, transparency is one of the first and most important steps in bridging the divide: “A lingering culture of secrecy … only perpetuates the problem.”

So if transparency and awareness of the full extent of the gender pay gap are key to closing it, here are five key findings everyone should know.

There is a gender pay gap across all age groups, but it starts off narrower: in the US, between the ages of 25 and 34, female employees earn around 90% compared with their male counterparts. As women get older, that gap gets bigger. Women over 65 who work full time make just 72.5 cents for every dollar earned by men.

Figure 1: Gender pay gap in the US by age 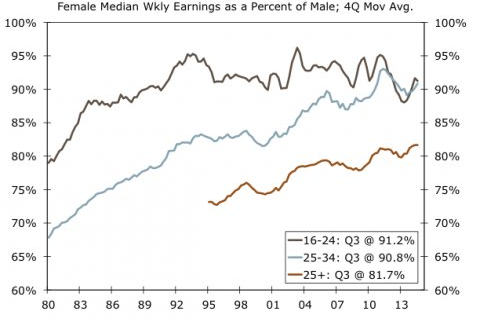 2. When workers are unionized, the gender pay gap shrinks

Research from the National Women’s Law Center reveals that the gender pay gap for unionized workers is half the size of that among non-unionized workers. It also found that unionized women earn on average $200 a week more than women who are not a member of a union.

There isn’t just a gender pay gap; there’s a gender pay-expectation gap. In a recent Glassdoor survey of the British labour market, 40% of men said they were confident they will receive a pay rise over the next year; just over a quarter of women said the same.

The authors conclude that the expectation gap also goes some way to explaining the difference in real earnings: “Individuals with low earnings expectations are more willing to accept a low-paying job offer because it is in line with their beliefs, and they are also less likely to negotiate for a higher salary since the offer is consistent with their benchmark.”

4. Women pay a ‘motherhood penalty’ – while men get a ‘fatherhood bonus’

“While the gender pay gap has been decreasing, the pay gap related to parenthood is increasing.” Those are the findings of Michelle Budig, a professor who has spent years researching the issue and how it plays out in the US.

Fatherhood, it seems, is highly valued in the world of work: fathers are more likely to be hired than their childless counterparts and men tend to see their earnings increase – by around 6% – after having children.

Women, on the other hand, pay a penalty of around 4% per child. The penalty is higher for low-paid workers.

Figure 4: Effects of each additional child on women’s hourly wage

5. It could be another 80 years before we achieve gender parity in the workplace

The Forum started measuring the global gender gap back in 2006. At the time, the gap for economic participation stood at 56%. Today, it’s 60%. While that’s progress, it’s too slow – if we continue at the same pace, we won’t achieve gender parity at work until 2095. That means most of us reading this won’t live to see workplace gender equality.

While statistics on the gender pay gap – and the slow pace at which things are changing – can seem depressing, moves like the UK’s mandatory gender pay audits are steps in the right direction. As David Cameron, the British prime minister, said when he announced the new measure, transparency will go a long way to closing the gap: “Casting sunlight on the discrepancies will create the pressure we need for change, driving women’s wages up.”

Do female CEOs affect their company’s pay gap?
How can women’s international soccer be better paid?

Women were especially affected by the pandemic. Effective public-private collaboration for greater equality can help close the gender gap in the region and beyond.