5 things you need to know about Alzheimer’s

Two new drugs that appear to slow down the progression of Alzheimer’s disease have been unveiled. Results from trials of solanezumab, an antibody developed by drugs giant Eli Lilly, show it may reduce the speed of mental decline by up to a third. Meanwhile, a drug from Biogen has had positive test results.

There’s caution ahead of the results of a larger Eli Lilly trial due to be published next year. But with hopes rising for an effective treatment, how much do we know about this debilitating disease?

1. What is Alzheimer’s disease?

Alzheimer’s is the most common form of dementia. It causes progressive damage to the brain, resulting in problems with memory, cognitive processes and the ability to engage socially. (See 10 early warning signals of Alzheimer’s)

Scientists have identified five main things that happen in the brains of Alzheimer’s sufferers:

The primary cause is age. But aspects of lifestyle like physical or mental inactivity, obesity, alcohol and cigarette smoking are regarded as major risk factors. Research also suggests that sleep deprivation, head injuries, poor diet and loneliness can play a part. Hereditary factors are thought by most experts to play only a very small role. However, some recent studies point in the opposite direction.

4. How prevalent is Alzheimer’s?

There are 44 million sufferers around the world, according to the Alzheimer’s Society. That figure is expected to rise to 135 million by 2050. It is much more likely to affect women than men. In 1990, it was ranked 44th in the list of causes of premature deaths around the world; by 2013, it had moved up to 29th, according to the Institute for Health Metrics and Evaluation.

5. How do countries compare?

There are striking differences in the incidence of the disease around the world. It particularly affects developed nations with Europe and North America worst-hit. Finland (marked red on the map) has the highest incidence in the world, based on data from 2010. 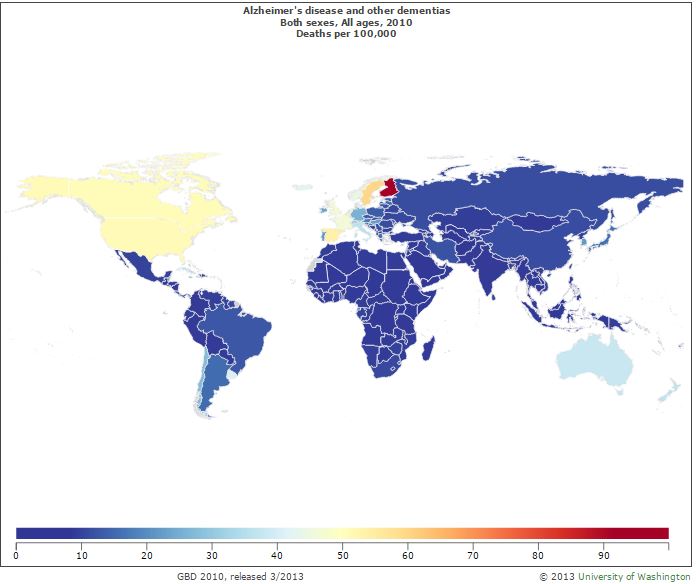 Explanations for these differences range widely. High standards of hygiene and weaker autoimmune systems is one theory. The link with poor diet and problems with insulin has led some to describe this as type 3 diabetes. Research in Iceland (another highly affected country) suggests there’s a strong genetic component.