What happened to US inequality in 2014?

Income inequality in the United States grew more acute in 2014, yet the bottom 99 percent of income earners registered the best real income growth (after factoring in inflation) in 15 years. Thelatest data from the U.S. Internal Revenue Service show that incomes for the bottom 99 percent of families grew by 3.3 percent over 2013 levels, the best annual growth rate since 1999. But incomes for those families in the top 1 percent of earners grew even faster, by 10.8 percent, over the same period. (See Figure 1.) 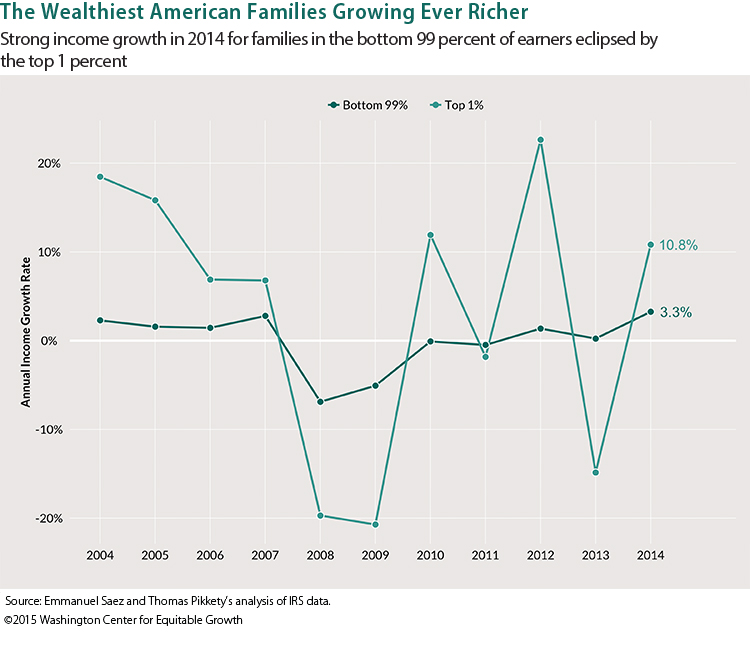 Overall, real average incomes per family in 2014 grew by a substantial 4.8 percent. For the bottom 99 percent of income earners, this marks the first year of real recovery from the income losses sparked by the Great Recession of 2007-2009. After a large decline of 11.6 percent from 2007 to 2009, those families saw a negligible 1.1 percent in real income gains from 2009 to 2013. But a full recovery in income growth for the bottom 99 percent is still not in sight. In 2014, these families recovered slightly less than 40 percent of their income losses due to the Great Recession.

This difference in timing explains why economic growth statistics are much more widely discussed than income inequality statistics in public debates about economic inequality and growth. But for the first time, this income data is now more readily available because the Statistics of Income division of the IRS now publishes filing-season statistics by size of income. These statistics can be used to project the distribution of incomes for the full year.

My colleagues and I used these new statistics to update our top income share series for 2014, which are part of our World Top Incomes Database. These statistics measure pre-tax cash market income excluding government transfers such as the disbursal of the earned income tax credit to low-income workers. For the first time, we can produce inequality statistics less than 6 months after the end of the year.

Timely statistics on economic inequality are central to informing the public policy debate about the connections between economic growth and inequality. One case in point: The higher tax rates for top U.S. income earners enacted in 2013 as part of the Obama Administration and Congress’ federal budget deal seem to have had only a fleeting impact on the outsized accumulation of pre-tax income by families in the top 1 percent and 0.1 percent of income earners.

To be sure, there was a shifting  of income among high-income earners from 2013 to 2012 as these wealthy families sought to avoid the higher rates enacted in 2013. This adjustment created a spike in the share of top incomes accumulated by the very wealthy in 2012 followed by a trough in 2013. By 2014, however, top incomes shares were back to their upward trajectory. This suggests that the higher tax rates starting in 2013, while not negligible, will not be sufficient by themselves to curb the enormous increase in pre-tax income concentration that has taken place in the United States since the 1970s.

This article is published in collaboration with [was first published by] xxxxxxxxxxxx. Publication does not imply endorsement of views by the World Economic Forum.

Author: Emmanuel Saez in a professor of economics at the University of California-Berkeley and a member of the Washington Center for Equitable Growth’s steering committee

How to measure progress in building a sustainable future

Businesses and investors want and need consistent and comparable metrics to demonstrate the sustainability and societal impact of a company.