What is the link between innovation and social mobility?

Over the past decades, we have seen an accelerated increase in top income inequality worldwide, particularly in developed countries (Goldin and Katz 2008, Deaton 2013, Piketty 2013). In recent research (Aghion et al. 2015), we argue that in developed countries, starting with the US, innovation is an unavoidable part of the story. Thus, if we look at innovation (measured by the annual flow of patents) and top income inequality (measured by the top 1% income share) in the US since the 1960s, we see that these two follow parallel evolutions. 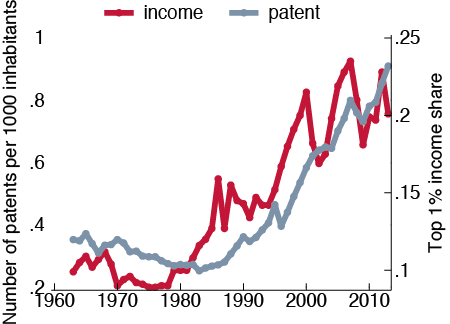 Note: The figure plots the number of patent applications per 1000 inhabitant against the top 1% income share for the USA as a whole. Observations span the years between 1963 and 2013.
Source: Aghion et al. (2015).

But in addition, as we argue below:

That innovation should both increase top income inequality and foster social mobility relies on the following intuition, which we formalise using a Schumpeterian growth model – each new technological innovation allows the innovator to increase his technological advantage over the competitive fringe. It also allows the entrepreneur to reduce his demand for labour. Both of these contribute to increasing the entrepreneurs’ share of income at the expense of the workers’ share of income, at least temporarily until the fringe catches up with the new technology; hence, a positive effect of innovation on top income inequality. But at the same time, more innovation implies more creative destruction, i.e. more scope for having new innovators (‘entrants’) replace current firm owners (‘incumbents’). This, in turn, implies that any type of activity by incumbents aimed at increasing entry barriers (for example, lobbying), will dampen the positive effect of innovation on social mobility, and should therefore be fought against if the objective is to achieve more inclusive innovation-led growth.

We measure top income inequality by the top 1% income share, using data from Frank (2009). To measure current innovation in a US state, we first use the annual number of new patents per capita in that state (we refer to this measure as ‘patent count’). Then, we exploit the information in the USPTO database to construct various measures of quality-weighted innovation based on patent citations.

Figure 2 shows that the top 1% income share in a given US state in a given year is positively and significantly correlated with the state’s degree of innovativeness computed using patent counts.

In our paper, we go further and show that this correlation reflects a causal effect from innovation to top income inequality, and this is true for all the measures of innovation. We establish this causality result using two different ways of instrumenting for innovativeness in a state. The first strategy uses data on the appropriation committee of the Senate (following Aghion et al. 2009), the idea being that a new appointee on the appropriation committee will push for allocating federal funds to research in her state. The second strategy uses information on innovation in other states, the idea being that innovating activities in other states have knowledge spillovers and therefore reduce the innovation cost in a particular state.

As it turns out, both instruments, even though they are unrelated, deliver similar significant coefficients. For example, when measured by the number of patents per capita, the increase in innovativeness accounts on average for around 17% of the total increase in the top 1% income share between 1975 and 2010, whether we use the appropriation committee or knowledge spillovers as instruments. This is a significantly large number, especially if we bear in mind the fact that innovators often move from one state to another when innovating, or that some of the rents from innovation may increase the income of individuals not located in the state. None of these enters the 17% figure!

Figure 3 shows that innovativeness is neither positively nor negatively correlated with a broader measure of inequality such as the Gini, which does not emphasise the very top incomes. Figure 3 groups all state-year observations into percentiles and plots the average income share of top 1% and the average Gini index of the corresponding innovation percentile. To facilitate the comparison, each series is normalised by its initial value. The figure shows that moving from the lowest to highest innovation percentile increases the share of the top 1% by 30%, whereas the bottom-99 Gini remains unchanged across all innovation percentiles. We show that the same is true when considering other measures of inequality like the top 2-10% income share (i.e. excluding the top 1%), or measures of inequality like the Atkinson index.

Next, we look at how innovativeness affects social mobility across US commuting zones (CZs), using the measures of social mobility in Chetty et al. (2014) combined with local measures of innovation (using the fact that the USPTO database provides information on the address and zip codes of patent inventors). Chetty et al. define absolute upward mobility as the expected percentile or ‘rank’ (from 0 to 100) for someone aged 30 in 2011-2012 whose parents belonged to some percentile of the income in 1996 when the person was aged 16.

Figure 4. Innovation and social mobility in the US

Note: The figure plots the logarithm of the number of patent applications per capita (x-axis) against the logarithm social mobility (y-axis). Social mobility is computed as the probability to belong to the highest quintile of the income distribution in 2010 (when aged env. 30) when parents belonged to the lowest quintile in 1996 (when aged env. 16). Observations are computed at the Commuting Zones level (569 observations). The number of patents is averaged from 2006 to 2010.
Source: Aghion et al. (2015).

Figure 4 shows a positive correlation between patent count and social mobility. This is consistent with the prediction that innovativeness increases mobility at the top.

Lobbying as a dampening factor

Lobbying activities typically help incumbents prevent new entry, thus the conjecture is that in locations with higher lobbying intensity, innovativeness should have a lower effect on social mobility.

The Open Secrets project provides sector-specific lobbying expenditure at the national level. In order to measure lobbying intensity at the local level, we construct a Bartik variable for each commuting zone as the weighted average of lobbying expenditure in the different sectors, with weights corresponding to sector shares in the state’s total employment from the US Census Bureau.

Next, we look at how lobbying intensity impacts the effect of innovativeness on social mobility across commuting zones. We find that:

These results confirm the idea that lobbying dampens the impact of innovativeness on social mobility by reducing the effect of entrant innovation.

In our recent paper (Aghion et al. 2015), we analyse the effect of innovation-led growth on top incomes and on social mobility. We find positive and significant correlations between innovativeness on the one hand, and top income shares or social mobility on the other hand.

Deaton, A (2013), The Great Escape: Health, Wealth, and the Origins of Inequality, Princeton University Press

3 steps for emerging markets to recover from COVID-19

The pandemic is expected to cause disproportionate damage to emerging market economies, put the right policies can help.