It was the platform on which Hillary Clinton announced her 2016 presidential bid; later it was the network through which pictures of Barack Obama and Raul Castro’s historic handshake spread like wildfire: there’s little doubt that Twitter has become a political playground as much as a public one. In fact, for many global leaders it’s now the channel of choice as they broadcast themselves to the world.

But can diplomacy, even the digital kind, be meaningfully applied via 140-character or six-second sound bites? The concept, despite its similarities with many other fad-driven tech tools, is surprisingly sound. A new era of governance appears to be coming into focus, in which those leaders who channel the most time and money into digital communications emerge as the most effective.

So, with real-world battles now playing out between the Twitter feeds of foreign ministries, and hashtag campaigns such as #BringBackOurGirls advancing causes the world over, let’s take a closer look at the Twitter battleground and the leaders who are carving out their place in it.

Unavoidably, Barack Obama’s name dominates any discourse about politicians on Twitter. Just like he did last year, the US president tops the ranking as the world leader with the most followers. His @BarackObama account is the third most popular in the entire Twittersphere – after pop stars @katyperry and @justinbieber – with close to 60 million followers. It’s a personal account that, in 2016, he will take with him into retirement. It isn’t followed by @WhiteHouse or any other official US government accounts because law dictates that personal and public Twitter accounts be kept separate. Obama’s other two accounts, @WhiteHouse and @POTUS, will be left to the next incumbent. 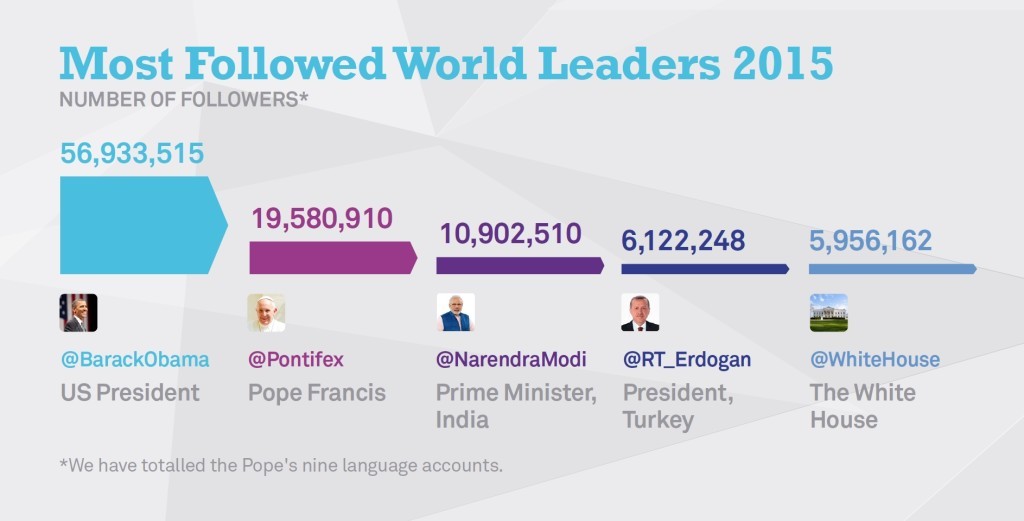 Obama may have collected the largest number of followers, but in terms of global influence no one comes close to Pope Francis. His @Pontifex account can be read in English, Spanish, Arabic, French, German, Italian, Polish, Portuguese and even Latin. Spanish-language @Pontifex_es is the most influential, inspiring almost 10,000 retweets per tweet. Obama is the second most retweeted world leader, with a comparatively low rate of 1,210 retweets per tweet. The papal account launched in 2012 and by 2013 had collected 3.4 million followers. As of April this year, it is being followed by 20 million people, a scale of recognition that only Obama and Justin Bieber, of all the world’s iconic tweeters, can relate to. 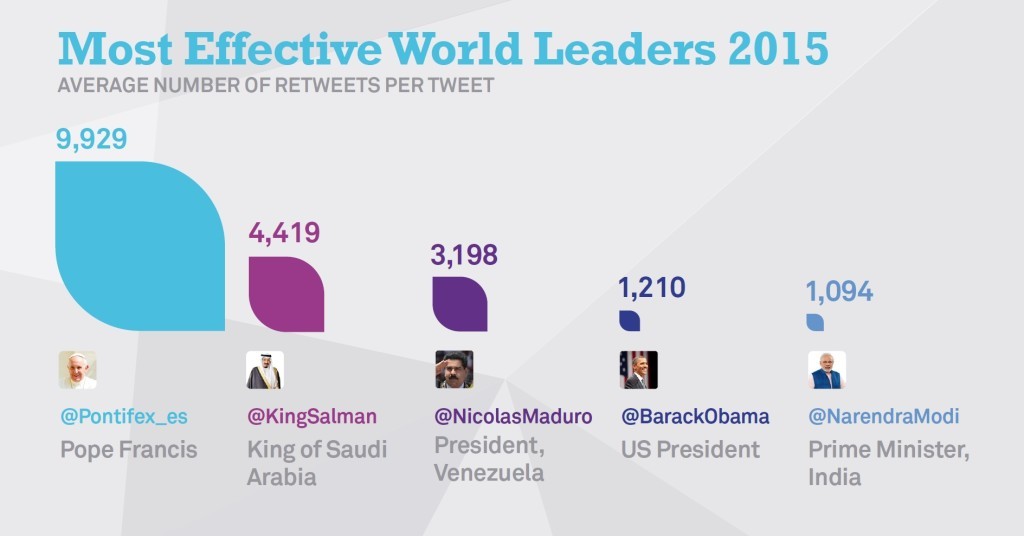 Anyone can set up a Twitter account, and anyone can select other tweeters to follow – but which high-profile Twitter users enjoy the validation of being followed back by someone they respect? Not that many, it turns out. French Foreign Minister @LaurentFabius tops the list of most-connected leaders, with 100 mutual Twitter friends among his peer group. That’s not a lot, when you consider he has 161,000 followers. Close behind him comes the Russian Foreign Ministry, which is mutually connected with 93 other ministries and leaders via its English-language account, @MFA_Russia.

While @BarackObama and the @WhiteHouse are the most popular among their Twitter cohorts (followed by 239 and 196 people respectively), in most cases they have not returned the compliment. There are only three other world leaders that @BarackObama follows back: Russia’s Prime Minister Dmitry Medvedev (@MedvedevRussiae), Norway’s Prime Minister @Erna_Solberg and Estonia’s Foreign Minister @KeitPentus. Meanwhile, @WhiteHouse is on mutual tweeting terms with only two other leaders: @MedvedevRussiae and the UK Prime Minister, @Number10gov. Since his election in late May 2014, the Twitter account of India’s Prime Minister @NarendraModi has rocketed up the Twiplomacy ranks to third place, surpassing @WhiteHouse and Turkey’s President Recep Tayyip Erdoğan. This year has been an eventful one for @RT_Erdogan, himself a latecomer to Twitter, who sent his first tweet in February 2015. Followers signed up in droves, propelling him into the top five most followed leaders worldwide; it displaced Indonesia’s outgoing president, Susilo Bambang Yudhoyono, whose decade-long term in office ended in October 2014.

The Twiplomacy study identified 669 Twitter accounts of heads of state and government, foreign ministers and their institutions in 166 countries worldwide. It analysed the Twitter profiles and tweet histories of each, as well as their connections with one another.

Have you read?
Most followed leaders on Twitter in 2014
Can social media make you a better person?
How Twitter fills the gaps for social research

Image: Hillary Clinton listens to Barack Obama speak during a meeting with members of his cabinet at the White House, November 28, 2012. REUTERS/Kevin Lamarque