The climate change conversation is heating up in the prelude to the 2015 United Nations Climate Change Conference in Paris. Australian Prime Minister Tony Abbott recently announced that his country would reduce carbon emissions by 26-28% by the year 2030. He was then forced to defend his country’s environmental policies when conservationists argued that this reduction was insufficient.

So how does Australia’s promised reduction in carbon emissions compare with commitments made by other countries? 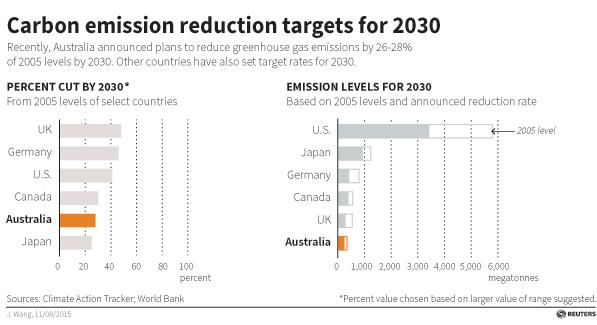 These commitments are part of Australia’s intended nationally determined contributions (INDCs), which are the concrete climate actions that all countries are expected to submit ahead of the climate conference. Australia is the 25th country to submit an INDC.

The goal of the conference is to create a legally binding and universal agreement on climate change that will see a reduction in greenhouse gas emissions, ensuring average global temperature increases stay below 2%.

Have you seen?
How wave energy can power Australia
2015: the year of global action on climate change
How can Australia generate double the energy?

Author: Murray Nicol is a Digital Project Manager at the World Economic Forum.

Image: Sheep graze in front of wind turbines that are part of the Infigen Energy’s Capital Windfarm located on the hills surrounding Lake George, near the Australian capital city of Canberra, Australia, July 17, 2015. REUTERS/David Gray

Clean energy needs may cause years of high prices for copper, nickel, cobalt, and lithium under a net-zero emissions scenario, impacting the energy transition.

Studio MOM and LAVO have created a hydrogen-powered bike, designed to take advantage of the higher energy-to-weight ratio offered by hydrogen fuel cells.

COP26: Experts give their verdict on the summit and the Glasgow Climate Pact