How do people in emerging countries feel about their economies?

Those are some of the findings from a Pew Research Center study that asked respondents in emerging markets to rate their economy as good or bad.

The study found that overall citizens in emerging and developing markets were more likely to say their economy was good than those in advanced economies.

Business Insider put together a rundown of the research to help make sense of some of the numbers. Here are emerging and developing countries, ordered from highest to lowest percentage of respondents who think their economy is doing well.

Check out the CIA World Factbook — from which each country’s economic background was extracted — here and the full Pew Center Study here.

Chinese respondents were most likely to describe their economy as good, while those in Ukraine were the least likely. 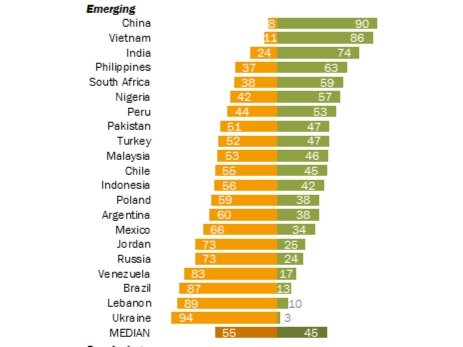 Significantly more Russians reported that their economy is doing “bad” than a year ago, with the proportion jumping from 44% in 2014 to 24% in 2015.

Nigerians are the most optimistic their country’s economy will improve over the next 12 months. 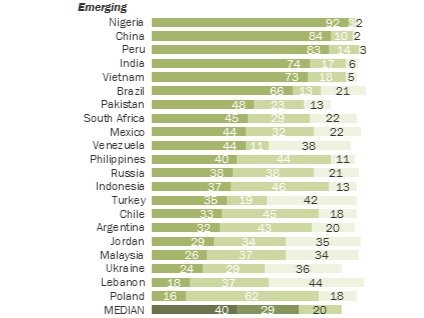 Lebanese respondents were the most bearish about the future of their economy.

Who said the economy will improve: 84%, up four points since 2014 and down three points from the country’s all time high in 2010.

What’s going on with the country: The country’s GDP failed to hit its target in 2014, and at 7.4 percent in 2014, growth is slowing. The Chinese markets have crashed in recent months, with the drop starting in June, a little after this survey was conducted. The Chinese government is on a hunt to find those responsible for the crash, while analysts are comparing the crash to the dot-com bubble or the Black Tuesday crash in 1929. (CIA world Factbook)

What’s going on with the country: Agriculture’s share of the GDP fell to 18% in 2014, while industry’s share increased in the same period.

Vietnam also struggles with undercapitalized banking sector and nonperforming loans, though the government established a three-pillar economic-reform system, which aims to turn Vietnam into a strong global competitor, creating social and economic opportunities, as well as enhancing sustainability of the economy.

Though exports slowed during the global recession, they rebounded in 2013-14. (CIA world Factbook)

What’s going on with the country: India is projected to be the eighth fastest-growing economy in the world, despite GDP growth falling to a decade long low in 2014 and a sharp depreciation of the rupee.

Western companies including GM and Amazon are pushing deeper into the Indian market in anticipation of big business from the country’s 1.25 billion people.

Investors have optimistically termed India as a “second China.”

What’s going on with the country: The Philippines has enjoyed economic growth, averaging 6% per year from 2011 to 2014. Unemployment, however, has hovered at 7%.

Since the country was not heavily exposed to international securities in 2007, it came out of the global recession better than its geographic neighbors.

Meanwhile, as neighboring heavyweight, China, embarks on an antigraft campaign that hit casinos in Macau particularly hard, Filipino casino stocks surged in July, with the nations regulators reporting that gaming revenue could increase by 20% in 2015, Bloomberg reported.

What’s going on with the country: South Africa has had decelerating economic growth. Official unemployment is 25%, while government policy has been trying to push down inflation.

Structurally, South Africa struggles with a deficit of electricity supplies.

What’s going on with the country: Nigeria has emerged as Africa’s largest economy, with 2014 GDP estimated at US$479 billion. The country is Africa’s leading oil producer, and its economy has grown at a rapid 6%-8% per annum, driven by growth in agriculture, telecommunications, and services.

The medium-term outlook for Nigeria is good, assuming oil output stabilizes and oil prices remain strong. The Nigerian Naira also remains strong, and has been on a general upward trend over the past 10 years.

The majority of its population — 62% — live in poverty.

However, the high-profile moves of Boko Haram, the terrorist group in Nigeria, has also eroded investor confidence. (CIA world Factbook)

What’s going on with the country: Metal and mineral exports accounted for 60% of the country’s total exports and helped push the economy up by an average of 5.6% from 2009 to 2013. The country is the world’s second-largest producer of silver and third largest of copper.

What’s going on with the country: The country benefited from a string of international trade deals — recently it signed accords to create the China-Pakistan Economic Corridor — a revival of the historical silk road, which will create roads, rails, and pipelines.

Pakistan struck another trade deal with the EU that boosted exports by $1 billion.

What’s going on with the country: Turkey dealt with a severe financial crisis in 2001, and eventually was forced to adopt fiscal reforms on its IMF program that year. GDP growth, however, fell to 4.4% in 2013 and 2.9% in 2014.

What’s going on with the country: The oil and gas sector supplied about 29% of government revenue in 2014 — though falling global oil prices have offset the profits.

Meanwhile, tourism in the country has grown at its fastest pace since 2008 — jumping 10% from January through October, in comparison to the same period last year.

What’s going on with the country: Chile has the strongest sovereign bond rating in South America.

Exports of goods and services account for one-third of GDP, with commodities making up some three-quarters of total exports. Copper alone provides 19% of government revenue.

But the economy has been slowing, dealing with a strengthening dollar and declining demand for exports, particularly in China.

Back in May, President Michelle Bachelet also asked all her ministers to resign. (CIA World Factbook)

What’s going on with the country: Indonesia has seen a slowdown in growth since 2012, mostly because of the end of the commodities export boom. Indonesia still struggles with poverty and unemployment, inadequate infrastructure, corruption, a complex regulatory environment, a current-account deficit, and unequal resource distribution among regions.

Fuel subsidies were almost completely removed in early 2015, a move that could help the government increase spending on its development priorities. (CIA World Factbook)

What’s going on with the country: Although EU membership and access to EU structural funds have provided a major boost to the Polish economy since 2004, GDP per capita remains significantly below the EU average. In the short term, the key policy challenge is consolidating debt and spending without stifling economic growth.

Overall, the Polish economy has performed well over the past five years. (CIA World Factbook)

Who said the economy will improve: 32%. That’s up 12% since 2014 — though returning to a figure similar to those of years prior.

The country recently came into the limelight for $5.4 billion in unpaid sovereign debt from when the country defaulted back in 2001-02, and a group known led by activist investor Paul Singer has been pushing Argentina for payment.

But one reason for optimism may stem from Argentina’s elections coming later this year. And you can see some of that sentiment in the direction of the Argentine stock market, Merval, which grew 30% in the first half of 2015. (CIA world Factbook)

What’s going on with the country: Mexico is the US’s second-largest export market and third-largest source of imports.

Stronger demand for Mexican exports and increased investment are likely to strengthen the economy in 2015. Since about 30% of government revenue comes from state-owned oil company PEMEX, lower oil prices affect the country’s economy heavily.

Mexico is dealing with a wage crisis, with more than 50% of the population living in poverty in 2012.

What’s going on with the country: Among the smallest economies in the Middle East, Jordan has insufficient supplies of water, oil, and other natural resources, making it dependent on foreign assistance.

ISIS has also been active in the area surrounding Jordan, meaning Syrian refugees are now 21% of the kingdom’s population.

What’s going on with the country: The economy has been strangled by sanctions from Americans and the EU, as world powers condemned the Kremlin’s involvement in the Crimea conflict.

Because of the dramatic crash of oil prices, Russia also saw tax revenue tank. Then in the second half of 2014, the Russian ruble lost about half of its value.

In April 2015, the Russian Ministry of Economic Development predicted that the Russia’s economy will contract by 3% in 2015, and average only 2.5% growth through 2030. (CIA world Factbook)

Who said the economy will improve: 44%.

What’s going on with the country: Venezuela is highly dependent on oil revenues, which make up about 96% of export earnings and 11% of the country’s GDP. The country did not do well in 2014 — with GDP contracting by 4% in 2014, with 68.4% inflation.

The IMF estimated the country’s GDP will shrink another 7% in 2015, and as the Venezuelan Bolivar sinks further, many American companies many consider exiting the country.

The authoritarian country is also becoming something of a dictatorship.

What’s going on with the country: Brazil’s economy outweighs that of all other South American countries. After reaching historic lows of 4.5% in early 2014, the unemployment rate remains low but is rising.

In July, Brazil’s central bank also raised interest ranks by half a point to 14.25%, hoping to push down inflation as the economy moved closer toward a recession.

In October 2014, the country also introduced a fiscal-austerity package intended to restore the primary account surplus to 1.2% of GDP and preserve the country’s investment-grade sovereign credit rating. (CIA World Factbook)

What’s going on with the country: The country has a very laissez-faire commercial tradition, with the government restricting very little foreign trade. Lebanon’s main growth sectors include banking and tourism, which has slowed in recent years. The country also houses the third-highest debt-to-GDP ratio in the world.

The country has been mired in regional and internal strife over the past few decades. Lebanon’s economy was greatly crippled by the 1975-90 civil war, which cut national output by half. Further strife in the region, such as the Syrian conflict that has led to more than 1 million refugees escaping into Lebanon, slowed economic growth to the 1 to 2% range from 2011 to 2013.

What’s going on with the country: Constant struggles with Russia from the Crimea annexation has eaten into Ukraine’s economic development. The ex-communist nation, which overthrew its Kremlin-backed government in 2014 in favor of independence, has been dealing with war and resource shortages. Recently, Russia cut off Ukraine’s gas supplies.

The country owes Russia about $3 billion this year, though Ukraine has been negotiating a debt-rescue plan with the IMF. The nation has secured a $17.5 billion loan from the IMF, under the condition that the embattled country impose monetary and fiscal-policy reforms.

After Russia, Ukraine was also the most important economic component of the former Soviet Union, producing one-fourth of the USSR’s agricultural output. The economy was on shaky ground however, even before 2014.