How the global population will change

Last week, the UN released updated population figures and projections. I just had a chance to go through them and the great key findings document (PDF, 1MB) that accompanies them.

But before I dive in, how accurate are these projections? What kind of track record do UN demographers have? The most comprehensive answer I could find was Nico Keilman’s 2001 paper which Hans Rosling refers to in this video. He notes that in 1958, when the UN projected the population in 2000 to be ~6 Billion (it was then 42 years into the future) they ended up being out by less than 5%. The short answer is: these projections are pretty good.

OK, back to the new data released in 2015: here are some of the trends that stand out for me. Note that I’m using the UN’s regional groupings rather than the World Bank’s. 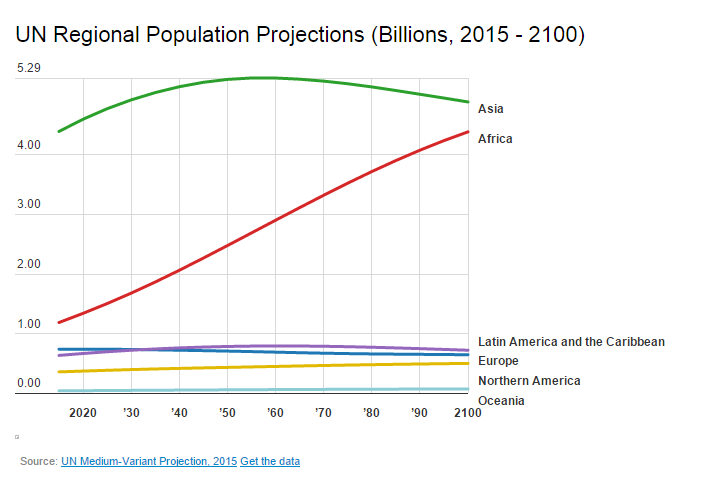 There are 7.3 billion people alive today and while the world’s population continues to grow, it’s growing more slowly than in the past. We can expect to see an additional billion people added over the next 15 years, and about a billion more 10 years later, reaching a total population of 9.7 billion in 2050.

According to the UN’s “medium variant” projection which assumes a decline in fertility rates and an increase in life expectancy, there’s a 95% chance that the world’s population will be between 9.5 and 13.3 Billion in 2100.   According to this model, the world’s population is “virtually certain” to rise in the short term, but later in the century, there is a roughly 23 percent chance that it could stabilize or begin to fall before 2100. 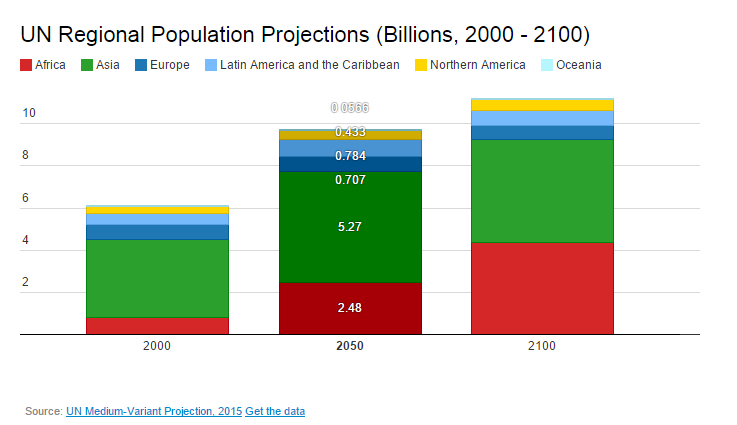 More than half of the global population growth between now and 2050 will occur in Africa, which will add 1.3 billion people to its ranks over the period. This 109 percent increase is by far the largest proportional change of any region.

In absolute terms, Asia will be the second largest contributor to the increase in the world’s population and notably, Europe is expected to experience a shrinking population, falling 4.3 percent over the next 35 years.

This was the most interesting set of findings for me. Within seven years (by 2022), the population of India will overtake that of China, and will reach 1.7 billion by 2050. That change alone will account for 17 percent of the world’s total population increase between now and 2050. Interestingly, the United States is the only high-income country in this list, and by 2050 will be the fourth most populous country after India, China and Nigeria. In fact (bonus chart!), Nigeria’s population is expected to overtake that of the United States some time between 2045 and 2050 to reach almost 400 million:

As I wrote last month, I find demography fascinating – the insights it can provide underpin the decisions that individuals and societies as a whole make.

I’d highly recommend reading the key findings document (PDF, 1MB) that accompanied this new data (and investigating the data yourself). In addition to details about changing survival patterns, age distribution and international migration, the document notes that the future of the world’s population is highly dependant on the future of fertility rates.

In the “medium variant” projections used above, they’ve assumed that the worldwide average fertility rate will fall from today’s 2.5 children per woman, to 2.4 by around 2030, and 2.0 by around 2100. But there’s substantial uncertainty in these projections, especially in countries with higher fertility rates. They point out that if the average fertility rate was just 0.5 children higher, the projected population for 2100 would be 16.6 Billion – more than 5 billion greater than the medium variant projection above.

I hope you get a chance to look at these new data – let us know what you find most interesting!

This article was first published by The World Bank’s Open Data blog. Publication does not imply endorsement of views by the World Economic Forum.

‘We deserve better than this’: What the youngest participant told Davos about gun violence

Why we need different generations in the workplace

Classroom to workplace: what young people need to succeed

Millennials fear catastrophic war: it’s time for the world to act on their concerns