What is Europe’s trade exposure to China?

Should we be worried about the turmoil in China’s stock market, and the spill-overs to markets in other countries? Two competing hypotheses currently exist:

The first is that Chinese stocks had grown at unsustainable rates leading up to the crash, and this is simply a market correction back towards fundamentals, and not a warning of deeper weakness in the Chinese economy.

This view would align with that of the ECB’s vice-president Vitor Constâncio:

“Indications are that … the (Chinese) economy is not decelerating so much to justify the rout in the stock market. (…) The problems in China are not affecting … the concerns of German firms,”

Stock market declines around the world would in this view only represent some short-term financial contagion without a connection to real economic activity.

The second hypothesis is that the collapsing stock prices are linked to aslowdown in economic activity in China. Such a slowdown will then be passed on through trade linkages to China’s trading partners.

We want to investigate whether the stock market falls in Europe are primarily a financial contagion problem or whether they are linked to trade exposure to China. We look at the decline since the start of August until now, compared to the extent to which the respective OECD economy is linked to China, measured in gross exports to China as a share of GDP.

Contrary to the first hypothesis that this episode is just a matter of turbulence in financial markets, we can see that in Europe those countries with stronger trade connections to China have generally suffered bigger losses in their stock markets. We take this as an indication that there is a disruption in the real economy in China, leading to less demand for European exports to China that is passed on to European stock markets through trade channels.

For example, if we look at Germany, we can see that the DAX has fallen by around 12% (second highest in the sample), and also has the highest exports to China as a share of GDP at 2.66%.

Overall, we would warn European policy makers not to take the Chinese crisis lightly. The health of the Chinese economy is of essence to the global economy and there are reasons to believe that this could turn out to be a more fundamental cooling of China than previously thought. 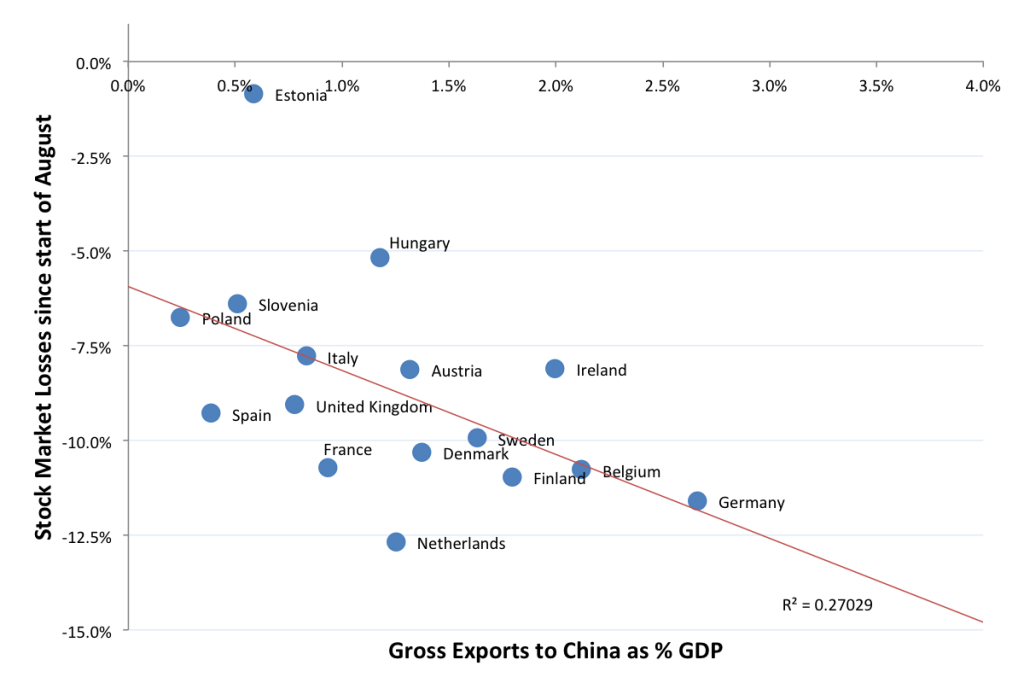 This article is published in collaboration with Bruegel. Publication does not imply endorsement of views by the World Economic Forum.

Author: Guntram Wolff is the Director of Bruegel. Thomas Walsh is a Research Assistant in the area of macroeconomics at Bruegel.

Image: A customer holds a 100 Yuan note at a market in Beijing. REUTERS/Jason Lee