Which countries are most dependent on others for water?

Nearly 2 billion people around the world still lack access to safe water. With world leaders preparing to agree on a new set of Sustainable Development Goals, the organisers of this year’s World Water Week are highlighting the need for access to clean water before any other development can take place.

Understanding the water challenges faced by different countries is a crucial first step, and one way of measuring this is provided by the UN Food and Agricultural Organisation with an indicator known as the “water dependency ratio”. It looks at the total amount of water available to each country that comes from outside of its borders.

For example, a country with a water dependency ratio of 0% obtains none of its so-called “renewable water resources” – i.e. those that are a result of rainfall – from other countries. A ratio of 100% means that a country receives all its water from outside; it is entirely dependent on its upstream neighbours. 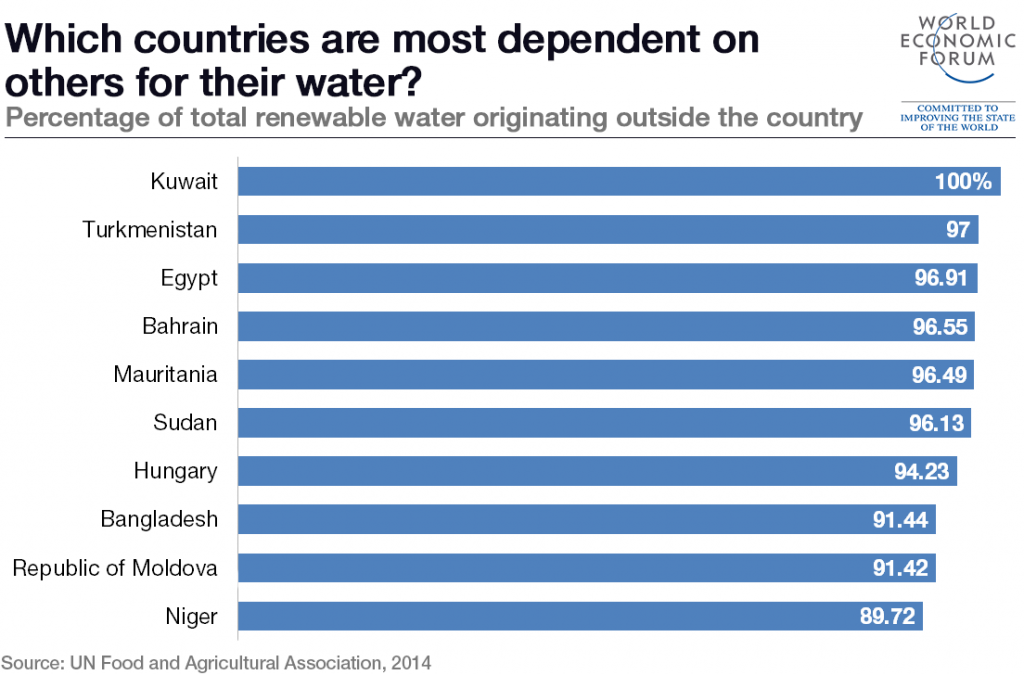 The top five spots are dominated by desert, arid or steppe countries in the Middle East, the Sahara, and Central Asia. In the case of Kuwait, 100% of its renewable water resources originate from neighbouring countries. Sudan and Egypt are heavily dependent on the River Nile, which is shared by nine other countries further up the river. In much the same way, Bangladesh is reliant on the River Brahmaputra and the River Ganges, both of which flow from India.

In Hungary, high evapotranspiration rates within the country (500-600mm/year) mean that water often disappears before it is replaced by internal rainwater, causing Hungary to be dependent on the Danube and its other rivers for water.

Have you read?
Why the water crisis is a top global risk
Can graphene make the world’s water clean?
7 reasons why water is vital for our future

Image: A girl looks at water from the Nile flowing from a pump in the Manshiyet Nasser shantytown in eastern Cairo. REUTERS/Amr Abdallah Dalsh

The country is providing ‘bed and breakfast’ for bees in the form of insect hotels, roadside wildflower verges and more. A recent survey suggests it might be working.

3 steps to help manage the complex risks of climate change

Can this billion-dollar initiative save the world’s tropical forests?

Our homes are full of harmful microplastics. Here's how to minimize the risk

What is the ‘Green List’ and how can it help protect the world’s natural wonders?