Which countries view China as the world’s leading economy?

Despite recent stock-market losses, decades of strong growth have cemented China’s position as one of the world’s economic powerhouses, alongside the United States, Japan and the European Union.

But where in the world is China seen as the leading economic power? That’s one of the questions Pew Research set out to answer in its Global Attitudes Spring 2015 Survey.

Respondents across 40 countries were asked: “Today, which one of the following do you think is the world’s leading economic power? The United States, China, Japan or the countries of the European Union?”

Half said it was America almost double those that went for China. (Japan was named by 6% and the EU by 5%.)

The following chart shows the 10 countries with the largest proportion of populations answering “China”. 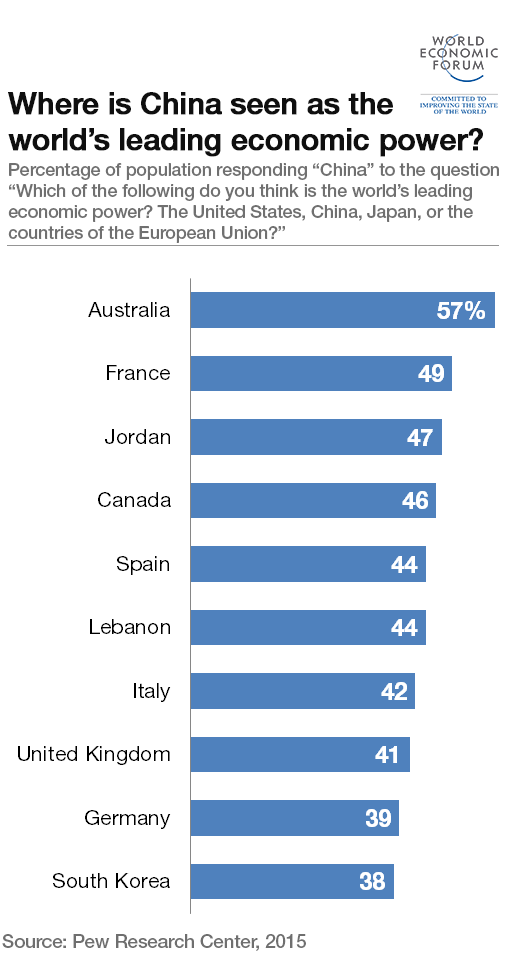 Australia tops the list, with 57% of people there viewing China as the world’s leading economic power, the only country where a majority of the population hold this view. The economic link between Australia and China is well established, with the commodities boom as its basis.

Have you read?
China and Greece: a tale of two crises
How can China find new routes to growth?
Why Africa needs to be more like China