Why is Eurozone inflation so low?

Eurozone inflation fell steadily in 2013 and 2014, reaching negative territory at the end of 2014 – year-on-year inflation was ‐0.2% in December and core inflation hit the historical low at 0.7% in the same month (Figure 1). Inflation fell to historically low levels not only in the countries that had been severely affected by the sovereign debt crisis, but also in those less directly influenced (Figure 2). In December 2014, no country of the Eurozone registered an inflation rate above 1%; in 12 countries out of 18 (Lithuania joined 1 January 2015) consumer price dynamics were negative. Formal econometric analysis confirms that these developments reflected mostly common rather than country-specific shocks (Delle Monache et al 2015).

Figure 1. HICP Inflation in the Eurozone and contribution of components (12-month percentage changes and percentage points)

Source: Eurostat.
Note: based on the Harmonised Index of Consumer Prices (HICP).

Figure 2. HICP Inflation in the Eurozone and by group of countries (12-month percentage changes and percentage points) 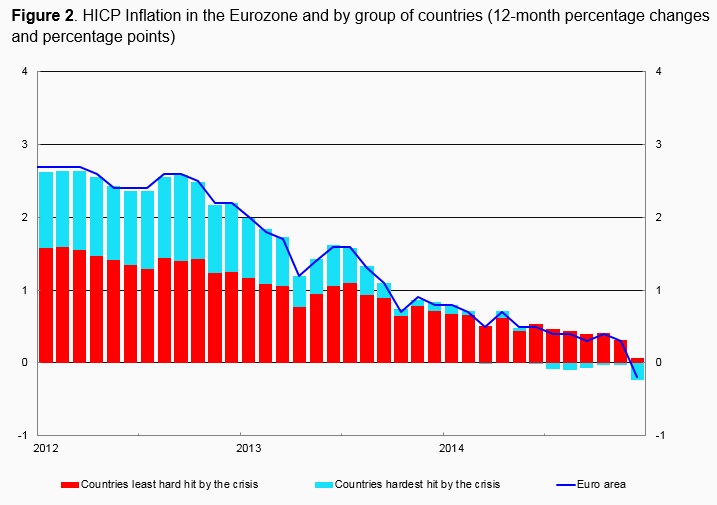 Source: Banca d’Italia, based on Eurostat.
Note: based on the Harmonised Index of Consumer Prices (HICP).

Disinflation and deflation are a source of special concern, as the macroeconomic effects of positive and negative shocks to inflation are likely to be asymmetric. Due to the presence of constraints in the economy – namely the zero lower bound (ZLB) on nominal interest rates, borrowing limits, and downward nominal wage rigidity – the costs of disinflation and, a fortiori, deflation tend to exceed those of inflation. As inflation declines, those constraints become binding; so much so that they can prevent:

The impact of a disinflationary shock on the tightness of these constraints depends on the cyclical and structural conditions of the economy (Casiraghi and Ferrero 2015).

The role of aggregate demand and oil prices

The fall in inflation since early 2013 can only be partially attributed to the developments in prices of energy goods and unprocessed food. The other components of the Eurozone consumer price index (non‐energy industrial goods, processed goods, and services) have also been characterised by subdued dynamics, supporting the view that weak aggregate demand was playing a key role in keeping inflationary pressures subdued (Constâncio 2014). This assessment is supported by Conti et al (2015) who find that the joint contribution of (conventional) monetary and demand shocks is at least as important as that of oil price developments (Figure 3). As regards the former, the effective lower bound to policy rates has prevented the ECB from providing the necessary monetary accommodation in the context of weakening prospects for economic activity and price dynamics. Falling inflation expectations have thus resulted in an unwarranted tightening of monetary conditions, as real rates have risen at a time in which aggregate demand was weak and inflation was already falling to low levels.

Note: the bars represent the contributions (left-hand side) of each of the identified shocks to the deviations of year-on-year percentage changes in the HICP (black solid line; right-hand side) from the baseline. Simulation based on the Bayesian VAR estimated in Conti, Neri and Nobili (2015).

The strength of the decline in inflation had been largely unexpected by market and professional analysts and inflation releases have often surprised on the downside. Market-based inflation expectations at short- and medium-term maturities have been affected by these ‘surprises’, over and above the impact of changing macroeconomic conditions and oil prices (Miccoli and Neri 2015). Predictions by professional forecasters also proved continuously overoptimistic, as the fall in inflation was sharper than implied by the historical correlation between inflation and the output gap (Riggi and Venditti 2015).

The failure of forecasting models in correctly tracking inflation implies increased uncertainty and asymmetry around the prospects for price developments. Against this background, quantile regression models have been able to better describe the distribution of inflation compared with benchmark models that are known to be good at forecasting inflation (Busetti et al 2015).

The risk of de-anchoring of expectations

The 2013-14 disinflationary phase differed radically from the one that had taken place in 2008-09, when oil prices collapsed dramatically from their July 2008 peak, in the wake of the global financial crisis. In that period, survey‐based long‐term inflation expectations remained well anchored to the definition of price stability. During the recent disinflationary phase, by contrast, long‐term inflation expectations, both survey-based and derived from the prices of swap contracts, have persistently declined, reaching historical lows (Figure 4). The decline in inflation swap rates at short- and medium-term maturities in 2014 was driven mainly by changes in inflation expectations, rather than in risk premia (Casiraghi and Miccoli 2015).

The fall of inflation expectations, with ECB policy rates at their effective ZLB, has exerted an upward pressure on the real short‐term interest rate, inducing a sharp tightening of monetary conditions. If monetary policy is constrained by the effective ZLB, the private sector is indebted in nominal terms, and nominal wages are downward rigid, then even transitory shocks to inflation (that under normal circumstances would reduce inflation and stimulate output) can have contractionary effects on economic activity (Neri and Notarpietro 2014, forthcoming).

The persistent decline of inflation expectations has raised concerns about the possibility of de-anchoring from the definition of price stability. Such concerns have been voiced by several members of the Governing Council of the ECB (see, e.g., Draghi 2014 and Visco 2014). Since mid-2014 negative tail events affecting short-term inflation expectations have been increasingly channelled onto long-term ones, igniting both downward revisions in expectations and upward changes in uncertainty (Figure 5). In contrast, positive short-term tail events have left long-term moments mostly unaffected (Cecchetti et al 2015). This asymmetric behaviour suggests that in the second-half of 2014 the risk of de-anchoring of long-term inflation expectations became material. This risk can be particularly serious in a context in which agents have incomplete information about the working of the economy and form expectations through an adaptive learning process (Busetti et al 2014).

The decisions of the Governing Council of the ECB in 2014 and 2015 hinged on growing evidence that the weakness of aggregate demand was contributing significantly to the decline in inflation and that the anchoring of expectations to the definition of price stability was at serious risk. Several analyses carried out by Banca d’Italia confirmed this view.

The extraordinary measures adopted by the ECB will contribute to preserving the credibility of monetary policy – the most important asset of a central bank, and a necessary condition for maintaining price stability over the medium-term. The purchase of government bonds will support aggregate demand through a variety of channels, helping to bring inflation back to levels consistent with the definition of price stability (Cova and Ferrero 2015); the improved economic conditions will also allow indebted households to reduce their debt and loosen their financial constraint (Burlon et al 2015).

Neri, S and A Notarpietro (2015) “The macroeconomic of low and falling inflation at the zero lower bound”, Temi di discussione (Working papers), forthcoming.

Visco, I (2014), Speech by the Governor of the Bank of Italy Ignazio Visco, 20th Assiom Forex Congress, Rome, 8 February.

Author: Stefano Neri joined the Research Department of the Banca d’Italia in 2000. Stefano Siviero is Head of the Economic Outlook and Monetary Policy Directorate of the Bank of Italy, and the Bank’s representative on the ESCB’s Monetary Policy Committee.

Image: A picture illustration taken with the multiple exposure function of the camera shows a one Euro coin and a map of Europe. REUTERS/Kai Pfaffenbach.