3 industries that will be hit by Arctic change

Most corporate boardrooms are not routinely focused on the Arctic. Making sense of changes in the Great White North is difficult (and seemingly unimportant) when you live far away and you’re not a scientist, or in charge of Arctic drilling. Yet research suggests that the loss of Arctic summer sea ice will seriously affect ecosystems, societies – and economies globally.

The final price tag is still unknown but potentially in the range of tens of trillions of US dollars. What we do know is that Arctic feedbacks will make the effects of climate change worse, all around the globe. These economic consequences will be widely but unevenly distributed – integrated assessment modelling shows that 80% of economic impacts from climate change will be borne by developing countries, because of more extreme weather, flooding, extreme heat stress, droughts, storms and poorer health.

Increased oil, gas and mineral extraction and the opening up of new shipping routes (which may reduce transport expenses for goods) are all economically attractive to businesses. But a balanced economic scorecard must consider industry sectors that face economic risks from Arctic change.

Here we consider three industries that arguably could be hard hit by the loss of Arctic sea ice.

Agriculture accounts for roughly 3% of the world’s GDP (higher in developing countries) and is one of the most vulnerable industries to climate change. While the Arctic region remains too cold to grow crops, the loss of summer sea ice has the power to significantly affect crop yields elsewhere. For example, a rapid ice melt can accelerate droughts, heatwaves and flooding to a faster pace than most agribusiness can adapt to.

This chart shows the production of the four most important staple foods, maize (corn), rice, wheat and potatoes, between 1961 and 2013: 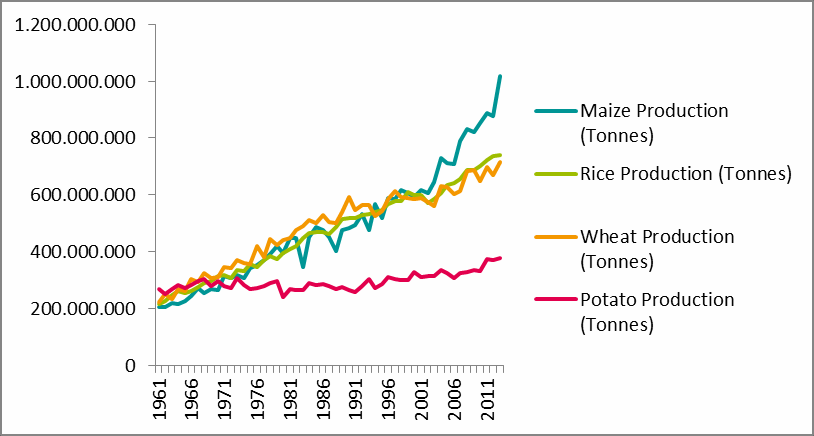 Global production figures over the past 50 years are impressive. Yet study after study shows that staples – as well as many other crops – are increasingly vulnerable to the effects of climate change.  Changing rain and snowfall patterns, increasing temperatures and more extreme weather events will seriously shake up the agricultural industry in the US, China, southern Europe and sub-Saharan Africa.

Of course, there are winners and losers, at least in the short term. While British wine-makers may rejoice at their newfound ability to compete with French sparkling wines, studies warn that businesses that “rely on agricultural exports for relatively large shares of their income may be vulnerable not only to direct climate-induced agricultural damages, but also to positive impacts induced by greenhouse gas emissions elsewhere”.

The bottom line: CEOs of Unilever, Nestlé, Cargill and Monsanto should pay – and increasingly are paying – more attention to the state of the northern ice caps. A melting Arctic poses serious risks to global food security.

2. The insurance sector and Arctic risk

In 2012, Lloyd’s of London warned that an oil spill in the Arctic was “a unique and hard” risk to mitigate, because of the complex and fragile ecosystem. Yet the insurance industry could be hard hit by Arctic change in more ways than one. Sure, insurers can anticipate increased risks for assets located within the Arctic – but also face risks to assets elsewhere that may be affected by Arctic change.

Take, for instance, the potential link between Arctic summer sea ice and extreme weather events such as Superstorm Sandy or the deep freeze of the Polar Vortex in Canada and the US. While answers are not yet definitive, Jennifer Francis from Rutgers University argues that the warming Arctic may be altering the jetstream, which can influence the size, duration and location of major storms, and allow Arctic temperatures to expand beyond its borders. “As the Arctic sea-ice cover continues to disappear and the snow cover melts ever earlier over vast regions of Eurasia and North America … it is expected that large-scale circulation patterns throughout the northern hemisphere will become increasingly influenced by Arctic amplification.”

If the science is correct, Arctic change may ramp up extreme weather events, leading to growing insurance risks. Munich Re, the reinsurance giant, estimated that the unseasonable cold from the 2014 Polar Vortex led to $2.4 billion in insurance losses. And 70% of the costliest natural disasters since 1980 have been storms or droughts. Scientific research demonstrates that global warming, amplified by the loss of Arctic summer sea ice, will increase the likelihood and severity of these kinds of events.

Back to the current state of play, satellite data shows that the 2015 Arctic melt season is consistent with a long-term and worrisome downward trend in the sea ice – a trend that may leave the insurance sector out in the cold.

The tourist industry relies on stable weather conditions, with tourists often planning vacations months in advance. A warming climate will reduce snowfall in the winter months, damaging the business of ski resorts, and cause other areas to become too hot in summers.

If we consider only the northern hemisphere, a recent EU study (ToPDAd) from Cambridge University suggests that even without Arctic amplification, there will be more than a 5% decrease in overnight stays in the warmest Mediterranean countries by 2050, countries that rely critically on tourism to support their GDP. Arctic amplification will draw that date closer, and increase the loss of tourism. Admittedly, people might shift their summer vacations further north, but that will be a shift that makes the current disparity in GDP between the northern and southern EU nations even larger, potentially collapsing the Eurozone.

This chart shows the shift of summer overnight stays in beach-dominated regions, with effects on local tourist businesses. The values in colour are the percentage decline (red) or increase (green) in parts of the EU. 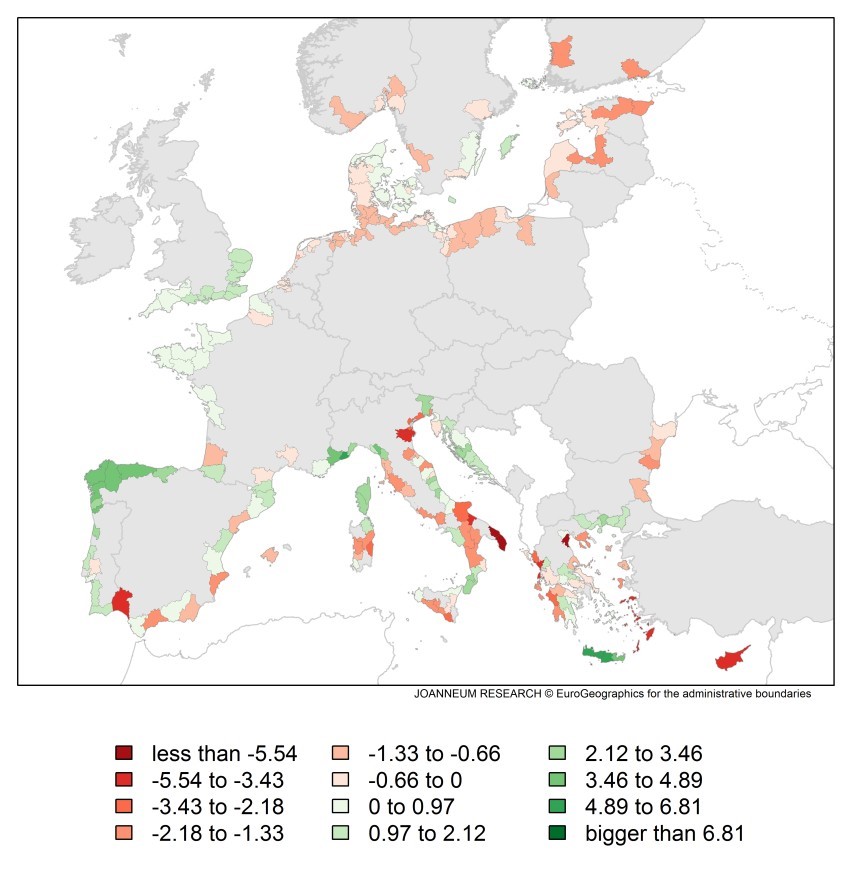 And there’s more to come

While some industries can benefit from Arctic change (e.g. extraction and potentially shipping), others such as agriculture, insurance and tourism face steep economic risks.

A balanced Arctic economic scorecard must consider both the benefits and costs of Arctic change, including the possibility of investments going sour. Assets (such as those from Arctic drilling) can become stranded and worthless when future climate effects become so evident that new policies cause fossil fuels to be left in the ground. And that would be a good thing for agriculture, insurance and tourism.

Image: A view of Lyngen-Fiord and the snow-capped Lyngen Alps near the village of Furuflaten, north of the Arctic Circle, October 1, 2014. REUTERS/Yannis Behrakis

Want investors to care about natural resources? Put a price on them

Asset owners should be part of the solution to the two biggest problems facing humanity – the degradation of natural resources and the rise of inequality.

The ACT2025 consortium will also mobilize a wide range of stakeholders to design options, test ideas, and identify ways to achieve the best outcome at COP26.

5 things to know about the future of electric vehicles