What will be China’s next tech giant?

Watch a full recording of the session ‘China’s Digital Disruptors’ at the World Economic Forum’s Annual Meeting of the New Champions by using the video player below or following this link. Highlights from this session, including key themes discussed, social media updates, video and pictures, can be viewed further down the page.

Industry-redefining companies like Uber and Airbnb are making headlines thanks to their immensely popular platforms and massive market valuations. Uber’s ride sharing app was recently valued at $50 billion, while Airbnb’s private lodging platform hit the $25 billion mark after a recent round of fundraising. These numbers are impressive, but they pale in comparison to what some of China’s digital disruptors are up to.

Alibaba, China’s largest e-commerce company, was recently valued at $158 billion and internet portal Tencent was valued at $154.8 billion. While these figures are impressive, they are actually down: in Alibaba’s case from a high of $250 billion and Tencent from $200 billion. What does this mean for China’s most famous, and valuable, digital disruptors? 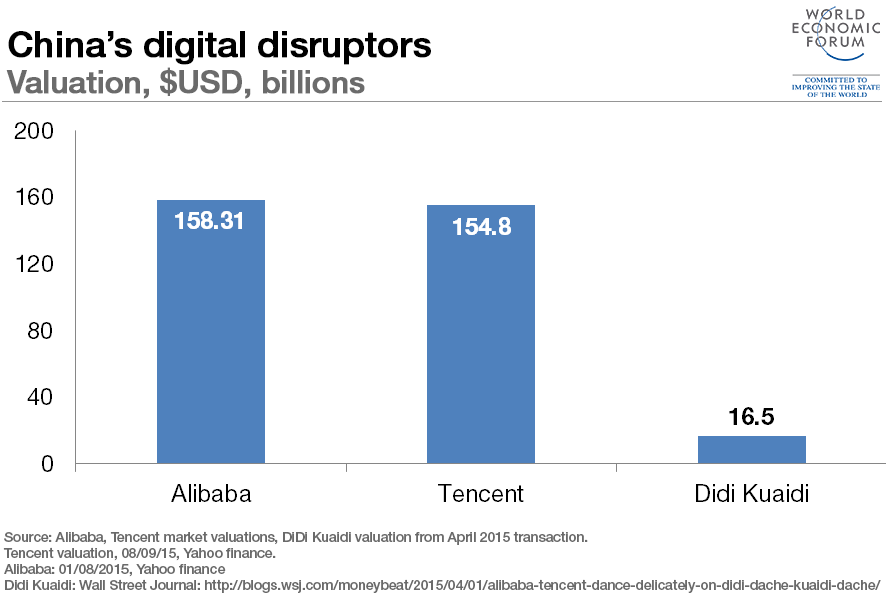 Issues such as changing lifestyle and consumption patterns and securing investment in volatile markets will be at the forefront of discussions on how a new generation of Chinese technology entrepreneurs are transforming industries and business processes.

Not to be forgotten in the conversation is Chinese ride hailing app, and Uber competitor, Didi Kuaidi, which recently raised $3 billion and has now been valued at $16.5 billion. Both Alibaba and Tencent have invested in Didi Kuaidi, so it remains to be seen if this latest Chinese digital disruptor can join the other two giants at the top.