How are global value chains shaping the world’s economy?

The importance of global value chains (GVCs) has been steadily increasing in the last decades and, as reported in UNCTAD’s World Investment Report 2013, about 60% of global trade consists of trade in intermediate goods and services, which are then incorporated at different stages of production (UNCTAD 2013). The prevalence of GVCs in the world economy impacts strongly on trade and labour markets, but also on issues such as inequality, poverty and the environment.

This notwithstanding, the measures that usually inform the policy debate, such as bilateral trade balances, export market shares or real exchange rates, continue to be used with little indication of the caveats that affect severely their accurateness.

In a recent VOX eBook we have collected relevant research by scholars directly or indirectly associated with CompNet, the Competitiveness Research Network of the EU System of Central Banks. There are three messages we want to share here on the three parts that comprise the eBook – GVC mapping, GVC impacts, and the firm-level dimension – leaving the rest to the readers to discover. 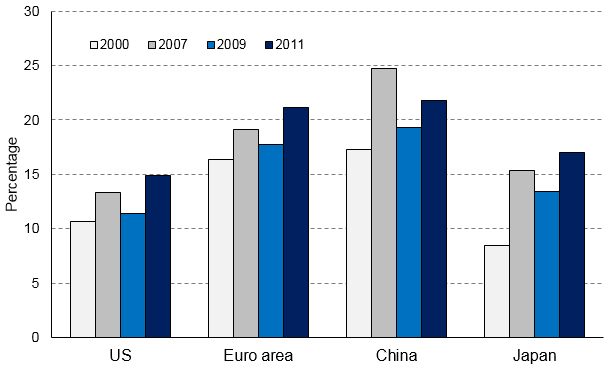 There is an urgent need for policymakers to fully acknowledge the extent to which conventional indicators related to gross trade are severely flawed as policy benchmarks because they fail to take into account the existence of GVCs and their increasing role in shaping the global economy. Academics and scholars are also well advised to stop quarrelling over definitions and to start proposing workable alternative indicators that are systematically produced and readily available. The eBook presented in this column tries to bridge this gap.

Image: Crew members of a ship loaded with containers are seen. REUTERS/Paulo Whitaker.