How can India make sure its growth benefits all citizens?

Despite India’s strong recent record on economic growth, its middle class remains small and getting a job is no guarantee of escaping poverty. Narendra Modi’s government faces an uphill struggle across a wide range of policy areas to ensure economic growth is more broad-based and socially inclusive.

The scale of the task is made clear by the World Economic Forum’s new Inclusive Economic Growth and Development Report 2015, introducing a framework that responds to the growing consensus that what matters is not just growth, but inclusive growth – that is, the extent to which GDP per capita translates into improvements in living standards for the population at large.

Measuring a country’s capacity to grow inclusively is difficult; the concept is relatively new, and there is not yet any consensus on which factors are important and how to weight them. The report therefore does not rank countries overall, but rather compares them to peers at similar income levels across a range of factors considered to be conducive to growth and social inclusion. 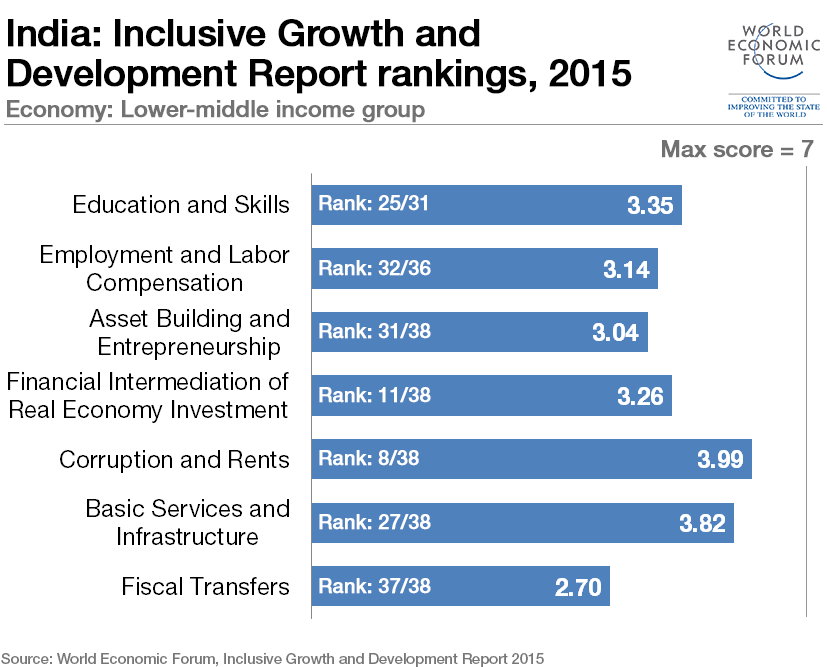 India is one of 38 countries in the lower-middle income group. Over the last ten years, its GDP per capita grew faster per year on average than any of the others with the exception of resource-rich Mongolia. Yet, over 60% of the population are living on less than $2 a day, its poverty rate is the third-worst in the group, behind only Zambia and Nigeria. It also has the third highest overall income inequality, behind Zambia and Swaziland. And only Nigeria and Pakistan have a lower proportion of their populations rated as middle-class, with incomes between $10 and $50 a day.

What can India do to address this disconnect and ensure that its healthy GDP growth benefits all its citizens, not just the fortunate few? A closer look at India’s performance across the seven pillars of the report’s inclusive growth framework points to some suggestions.

The first pillar is education, where enrolment rates are relatively low across all levels: barely above the median for its peer group on pre-primary and primary, and below the median for secondary, vocational and tertiary levels. The average level of education is only 4.4 years and a large gender gap continues to persist.

The overall results for India’s education system are disappointing, with low average rankings for scores in maths and reading comprehension, and a relatively poor primary pupil-to-teacher ratio. However, quality education is available for those who can pay. The gap in educational attainment between children from the top and bottom quintiles is greater than in most other countries with similar income levels, pointing to the possibility of transmitting inequality down the generations.

The framework’s second pillar deals with jobs and wages. India’s employment rate is relatively high, but much of this employment is vulnerable or informal. India scores worst of all 38 lower-middle income countries on working poverty – a measure of people with jobs who are nonetheless struggling on less than $2 a day. The gender gaps in labour force participation and wages are both high, showing that India’s women are not benefitting equally from economic opportunities.

The third pillar addresses people’s capacity to start their own enterprises and accumulate assets. A last-placed ranking on small business ownership is evidently not for want of good ideas, as India scores fourth on a measure of patent applications. But budding entrepreneurs are held back by red tape and an inefficient justice system, with relatively low rankings for indicators such as the time and cost of starting a business or enforcing a contract.

Pillar four brings some better news for India: it scores relatively well in terms of access to finance for developing businesses and investing in the economy. India’s entrepreneurs have better access to bank accounts, credit, venture capital and equity markets than their counterparts in most peer countries.

The country’s best performance across all seven pillars comes on pillar five, which measures issues related to corruption and market power. This results from strong performance on indicators of competition in the banking and corporate sector. While politicians in India are perceived as more trustworthy and less likely to divert public funds than in most other lower-middle-income countries, they still trail behind advanced economies. Nonetheless, corruption remains a serious barrier to inclusive growth, with only middling scores on measures of irregularities in tax collection and ethical behaviour of firms.

On pillar six, infrastructure and basic services like health, the picture is rather grim. Air pollution is the worst among peers with available data, while all but four of India’s peers provide more of their citizens with access to improved sanitation. The digital divide is wide, with only five comparable countries having a smaller proportion of their households online. On a brighter note, mobile internet is relatively affordable and India returns middling scores for access to electricity and transport networks.

The first six pillars have all dealt with aspects of the market’s capacity to generate growth in an inclusive way, on the rationale that redistribution ought to be seen as an important but secondary tool. Nonetheless, research shows that making society more equal through redistribution can boost rather than hold back growth, so the seventh pillar looks at the tax code and social protection programmes.

Some lower-middle income countries effectively use redistribution to reduce inequalities, but India is not among them: its GINI coefficient is barely changed by fiscal transfers. India’s tax code is the most regressive of the 38 countries in its income group, and it spends a relatively low proportion of GDP on social protection. Indeed, only one of India’s lower-middle income peers – the Dominican Republic – makes less effective use of fiscal transfers to improve social inclusion.

There may be much to celebrate in India’s recent economic growth. But when it comes to making sure that growth benefits all Indians, the battle is only just beginning.

Image: A girl studies while sitting on top of a taxi outside her shanty home at a roadside in Mumbai, India, August 11, 2015. REUTERS/Shailesh Andrade