How can we achieve growth for the many, not just the few?

There is no bigger policy challenge preoccupying leaders around the world than expanding participation in the benefits of economic growth and globalization. Indeed, a geographically and ideologically diverse consensus has emerged that a new – or at least much improved – model of economic development will be required if truly greater inclusiveness is to be achieved.

Unfortunately, this political consensus has remained aspirational, rather than prescriptive – at least up to now. Policymakers have yet to develop an internationally recognized policy framework – with a corresponding set of indicators and measurable milestones – to guide countries targeting broad-based improvements in living standards, rather than simply continuing to use GDP growth as the bottom-line measure of national economic performance.

The extent to which growth creates opportunities and improves living standards depends on an array of structural and institutional economic policies, including many in areas outside of education and redistribution (the areas most commonly featured in discussions about inequality). There is a growing recognition of the importance of institutions – particularly legal frameworks and public agencies that administer rules and incentives – in the development process. But this recognition has yet to fully penetrate the mental model of economic growth used by most policymakers and economists.

The role that institutions play in shaping economic growth was a key finding of the landmark 1993 World Bank study, The East Asian Miracle, which examined how eight countries in the region achieved “high growth with equity” from 1960 to 1990. The Commission on Growth and Development, chaired by the Nobel laureate economist Michael Spence, reached a similar conclusion in its 2008 report, The Growth Report: Strategies for Sustained Growth and Inclusive Development.

The lesson is also apparent in the economic history of the twentieth century, when – especially in the decades following the Great Depression – most of today’s advanced industrialized countries underwent a sustained process of institutional deepening that broadened the base and strengthened the resilience of their economies. Reforms targeting labor policy, the investment climate, social insurance, competition, education, and infrastructure created a more inclusive and more sustainable growth model by spreading purchasing power, which supported aggregate demand and reduced vulnerability to investment-driven booms and busts. 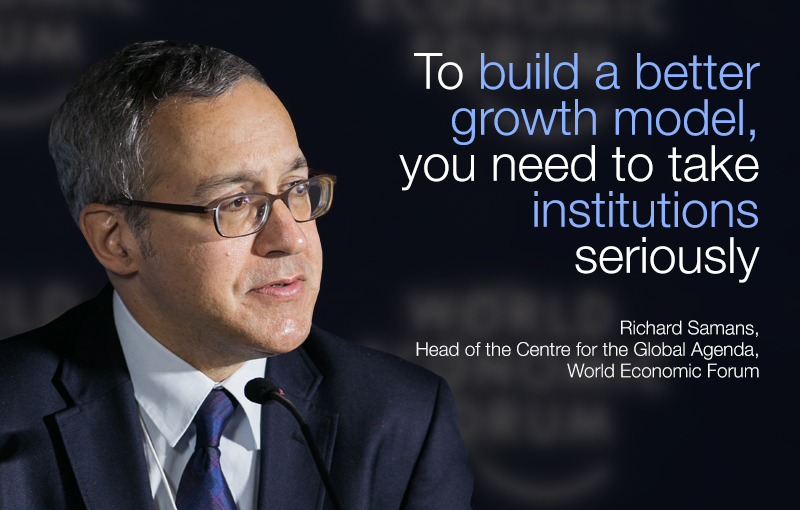 It is a lesson that needs relearning today, as the world economy continues to struggle to find a more solid foundation for growth and escape the shadow of the 2008-2009 crisis. Adopting a more socially inclusive model of growth and development will require widening the lens through which priorities are set when shaping national economic strategies.

Appropriate policies regarding macroeconomics, trade, and financial stability will remain crucial to establishing the basic conditions for the efficient allocation of resources underpinning growth. But such policies are only part of the solution. Developing domestic institutions and policy incentives in a broad spectrum of other areas that particularly matter for social inclusion will be vital to improving living standards, while reinforcing the growth process itself. The two types of policies deserve equal attention in national economic strategies.

It is important not to underestimate the cultural change that this will require of governments and the Economics profession. The concept of “structural reform” usually refers to measures aimed at boosting economic growth by sharpening market signals and restoring the health of public finances. Such policies are often implemented in response to fiscal or balance-of-payments crises and frequently squeeze living standards in the short term. But the strengthening of institutions in areas that promote social inclusion is also a form of structural reform, in this case for the purpose of maximizing growth’s contribution to broad living standards and strengthening its resilience.

The Inclusive Growth and Development Report 2015 from The World Economic Forum, has identified 15 domains that are important for promoting social inclusion. These include educational opportunity and performance, the relationship between productivity and wage growth, the concentration of economic rents, the effectiveness of the financial system’s intermediation of investment in the real economy, physical and digital infrastructure, and the coverage and adequacy of basic social protections. They also include areas not traditionally considered as equality-enhancing – such as facilitating asset building through small business and home ownership and combating corruption – but that are just as important as education or redistribution for improving living standards.

There is no single ideal institutional mix for inclusive growth, but all countries should begin to think more systematically about strengthening their institutions and creating incentives to promote inclusive growth. There is much room for improvement. In cross-country comparisons, no country outperforms its peers in every domain. Indeed, not a single country scores above average across all 15.

It is possible, indeed essential, to be pro-equality and pro-growth, to advocate strengthening social inclusion while promoting the efficiency of markets. An inclusive model for growth and development is inherently pro-labor and pro-business. It is time to put our aspirations to work.

The Inclusive Growth and Development Report 2015 is available here. You can also explore the findings of the report using this heatmap.

Helping governments improve their performance is the surest path to large-scale, lasting impact.