How much do people really know about inflation?

One of the key missions of the world’s central banks is to guard against dramatic movements in the price of goods. It’s a job that’s as much about psychology as it is economics: Public confidence in central banks to maintain stable inflation actually helps keep prices in check. Or so the thinking goes.

Now, a new paper led by Saten Kumar of Auckland University of Technology finds that many businesses in New Zealand do not have a clear understanding of inflation rates, much less the role of the central bank. Nor do they show much interest in learning about it: Google searches for puppies, the paper points out, are consistently more popular than searches for economic data.

That disconnect between popular perception and economic reality can wind up undermining the power of monetary policy, the paper argues.

New Zealand is a particularly useful case study. The country adopted an explicit goal for inflation 25 years ago, making it a pioneer of so-called “inflation targeting.” The practice is now standard at central banks around the world, including the Federal Reserve, with the target typically set at 2 percent.

The move is intended to let the public know that the central bank will work hard to ensure prices do not veer too far from the desired level. Businesses will then make long-term plans based on that rate of inflation, which in turn helps assure that prices remain stable, creating a positive feedback loop.

At least, that’s how it works in theory. Kumar and his coauthors conducted detailed surveys of firms in New Zealand showing how that assumption breaks down. 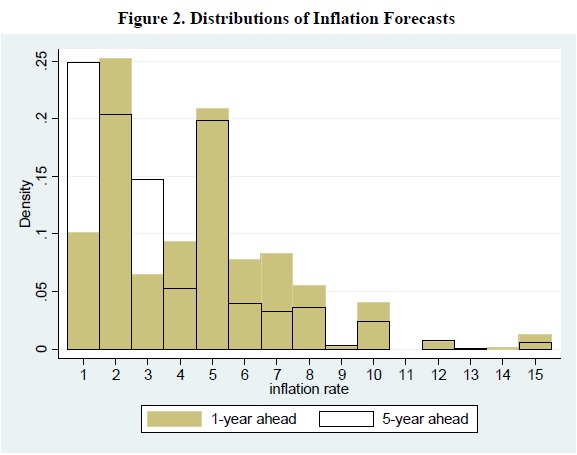 The results could be a sign that firms don’t trust the central bank to hit its inflation target. But more likely, the authors write, it’s a sign that they don’t really understand what it all means — whether in New Zealand or in the United States.

[P]olling data for the U.S. similarly confirm that the U.S. public shows no more knowledge of monetary policy than that of New Zealand. Americans have great difficulty in identifying the chair of the Federal Reserve System and are generally unable to identify recent inflation dynamics with any degree of precision. When asked about inflation over 10 years, few are willing to confidently predict low levels of inflation, a finding that speaks either to low credibility of the Federal Reserve or, more likely, to the fact that most people don’t know what reasonable ranges of inflation rates are. Nor do they seem to show much interest in learning about monetary policy. Twitter and Facebook followers of the entire Federal Reserve System are outnumbered by followers of the FBI and the CIA, and barely outnumber the followers of Ron Paul or Rand Paul. Paul Krugman single-handedly has almost twice as many twitter followers as the entire Fed system. Google searches confirm this paucity of interest: online searches for macroeconomic variables like GDP, unemployment rate and inflation are consistently topped altogether by online searches for puppies.

In the firms’ defense, puppies are cute and cuddly. Inflation targeting, not so much. And the authors did find that businesses have a good grasp on the concept of inflation. The problem is that they believe price changes in categories of goods, such as housing or food, are more important to overall inflation than they actually are. In addition, firms tend to forecast inflation based on their own shopping experiences. That means changes in the cost of a gallon of gas or a jug of milk can wind up unduly influencing firms’ forecast of aggregate price changes.

The lack of understanding has real economic effects. The authors find that three-quarters of firms that believe inflation will rise would make changes to their business in response. About a third would charge higher prices and about 25 to 30 percent reported they would increase wages, employment or investment. The paper argues that the results are broadly applicable to the United States as well.

So where does that leave central banks reliant on accurate public expectations of inflation in order to do their job?

“The fact that the public may largely be unaware of the policies or of their implications for aggregate prices implies that their effects will most likely be limited, or at least less than predicted by models with full information rational expectations agents,” the authors write.

The authors say the knowledge gap is an opportunity for the world’s central banks. The Fed in particular has made a concerted effort to increase transparency and communication with Main Street. Other studies have found that businesses that are given information about the central bank’s inflation target tend to revise their forecasts to match that target.

“This suggests that if central banks can more successfully communicate their objectives to the broader public, then this should have a pronounced effect on the beliefs of individuals,” the paper states.