How much would the global economy benefit from tackling gender inequality?

Tackling gender inequality and enabling more women to join the workforce could boost the world’s economy by $12 trillion over the next decade, with India set to benefit the most, researchers said on Thursday.

The world’s economy could see this increase to its annual gross domestic product (GDP) by 2025 if each country managed to narrow the gender gap at the pace of the best-performing economy in their region, according to McKinsey Global Institute (MGI).

India’s annual GDP would increase by 16 percent if women made progress towards closing the gap, MGI said in a report. 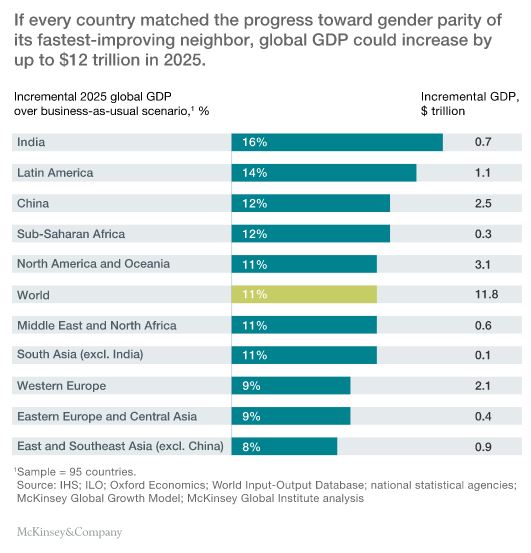 Yet this is unlikely to happen without significant social change, according to the report’s authors.

“Capturing the economic benefits will mean addressing gender inequality in society as well as attitudes,” said Jonathan Woetzel, director of the research arm of the consultancy McKinsey & Co, said in a statement.

The report comes as the United Nations adopted 17 Sustainable Development Goals (SDGs) on Friday, a set of 15-year objectives to combat a range of issues including poverty, climate change and gender inequality.

The report, which analysed 95 countries based on 15 indicators, including labour force participation, political representation and adult literacy rates, found that 40 countries had high or extremely high levels of gender inequality.

North America, Oceania and Western Europe were the regions which had made the biggest strides towards gender equality, while the Middle East, North Africa and South Asia were the worst performers, according to the report.

There are far fewer women in paid work compared to men due to the unequal sharing of household responsibilities, MGI said.

It said governments could achieve workplace gender equality and boost their economies by setting quotas for women on company boards and in politics, opening up avenues for female entrepreneurs and offering legal protection to women at work.

Nine in 10 countries have laws impeding women’s economic opportunities, such as those which bar women from factory jobs, working at night, or getting a job without permission from their husband, according to a World Bank report released this month.

This article is published in collaboration with the Thomson Reuters Foundation (trust.org). Publication does not imply endorsement of views by the World Economic Forum.

Gen Z will make up more than a quarter of workers by 2025 — but their priorities differ from those that came before them. Here's how to woo Gen Z talent.

The Good Work Framework: A new business agenda for the future of work

People are quitting jobs they just started. Here’s what managers can do