How virtual reality makes the world a better place

The preamble of the United Nations Charter has a clause that might sound quaint in 2015: “To employ international machinery for the promotion of the economic and social advancement of all peoples.”

But when considering the context, which was the aftermath of the Second World War, the mention of machinery makes perfect sense: mass industrialization was a means of developing, as well as damaging, human life. Planes could bring people closer but could also carpet bomb entire cities. Factory work provided higher standards of living, but also left wage labour open to exploitation. This inherent duality is still relevant in a world of rapid digitization. Virtual reality has emerged at the edge of visual storytelling technology. By immersing a viewer in a 360-degree spherical environment, modern storytellers have broken the boundaries of the cinema frame. Viewers can engage with a character, an environment and a story like never before. This technological leap has reinvigorated the UN’s mission to close the gap between global challenges and the policy-makers who can affect real change.

Our first collaboration with Vrse, a virtual-reality media and technology company, is titled Clouds over Sidra. It’s an immersive experience that takes viewers on a journey through a Syrian refugee camp in Jordan, as seen through the eyes of a 12-year-old girl named Sidra. So far, users of the experience have included humanitarians around the world, as well as UN dignitaries and Secretary-General Ban Ki-Moon. We will be telling Sidra’s story to a new audience of Asian and international leaders, gathered at the World Economic Forum’s Annual Meeting of the New Champions in Dalian.

The overwhelming power of Clouds is in part due to the resonance of virtual reality. In a virtual space, the viewer is placed within the story; characters appear beside you, and a real sense of proximity is established. Sidra illustrates the daily uncertainty of life in a camp, and cuts deep into the collective emotional consciousness: when she describes her perpetual limbo, you feel it with her. This month, buoyed by the favourable response to our first film, we released Waves of Grace, a story about an Ebola survivor who uses her immunity to care for others. The film charts a journey from mourning to perseverance, set in one of the world’s poorest countries.

Clouds over Sidra and Waves of Grace are just the beginning. We are continuing to bring the far-flung crises of the world to the people in power. Conditioned by the ability of new media to overcome boundaries and distances, audiences want to hear from people directly affected, to experience their worlds as much as possible. Whether the topic is sanitation, global warming or human trafficking, virtual reality has an impact like no other medium.

At the heart of what we’re doing is a firm belief that technology and good storytelling have the power to change lives. We have already seen this newfound empathy inspire action and make a difference. Ban Ki-Moon has incorporated our films into his UN pledging conferences with member states and donors, influencing decision-makers to go further in their efforts to support both the Syrian and Ebola crises. UNICEF has translated our virtual-reality films into more than 15 languages and is using them as a fundraising tool on the streets of over 40 different countries. Already we know that one in six people who watched the film contributes to UNICEF, which is double the usual rate. 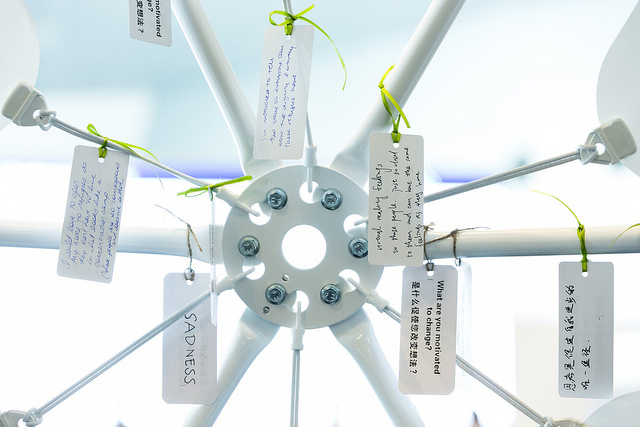 The UN’s enduring mission, together with the power of virtual-reality storytelling, is a powerful force for change. Clouds over Sidra and Waves of Grace are making the images and stories of conflict or disease more accessible at a time when millions around the world need more support than ever. And the initial response to the work confirms that when viewers feel what is happening, they know they can be doing more to drive change, even when they are worlds away.

Our overarching goal is to make virtual reality a catalyst for real-world change, solving the problems of today while showing just how relevant the principles of the 1945 UN Charter continue to be for all of us.

The Annual Meeting of the New Champions 2015 will take place in Dalian, People’s Republic of China, on 9-11 September.

Have you read?
How art helps us make sense of growth
Science, tech and a new course for growth
How to follow our #AMNC15 meeting in China

Authors: Chris Milk is an artist and director; Gabo Arora is a senior adviser and film-maker at the UN.

We shouldn't underestimate the power of cultural products. They can change the world

Entertainment products became an ever-more pervasive presence during the pandemic – so maybe it's time we included their creators in international forums.