Youth literacy has improved most in these countries

On 25 September, 193 world leaders committed to the Global Goals for Sustainable Development. Goal number four aims to ensure inclusive and equitable quality education for all, including a specific target for universal youth literacy by 2030.

This target builds on the improvements made under the Millennium Development Goals (MDGs), which expire at the end of this year, but not before seeing the global youth literacy rate rise to 91%.

The biggest increase was seen in Morocco, as shown in the following chart based on UNESCO data, which outlines the percentage-point increase in literacy rates among 15 to 24 year olds. It takes the closest data year to the implementation of the MDGs in 2000, and compares it with 2015 data. 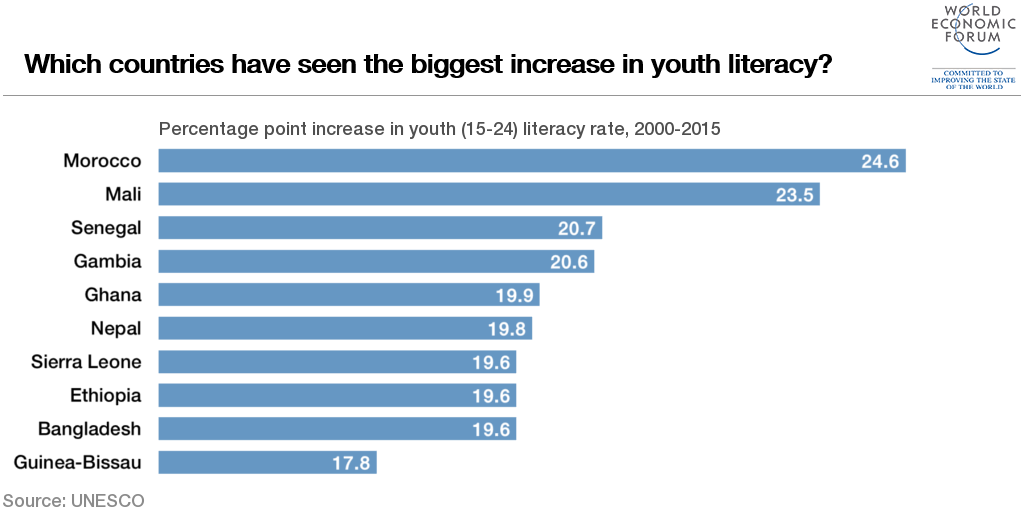 Morocco saw its youth literacy rise from 70.5% in 2004 to 95.1% in 2015. This success is largely attributable to the Moroccan government’s Decade of Education, which aimed to increase enrolment rates and close the gender gap. Through collaboration with NGOs, tens of thousands of new teachers were trained every year and primary education rates rose from 53.4% to 98.2% between 2000 and 2009.

Mali is in second place, having seen youth literacy rise by 23.5 percentage points. Senegal completes the top three, with a rise of 20.7.

The list is dominated by African nations, highlighting the success of programmes across the continent aimed at improving education and literacy.

Have you seen?
Which countries have the happiest children?
Which country comes top for skills and education?
Why we need 12 school years for every child

Image: A schoolgirl sits on the steps outside her classroom at Syed Pasha school, built by Canadian troops, near Kandahar Air Field September 8, 2009. REUTERS/Finbarr O’Reilly

Children need emotional and social skills to navigate an uncertain and unstable world and playful learning is one of the most effective ways to do so.

Trust is in short supply on the jobs market – but a global skills passport could help both jobseekers and employers.