The future of Chinese travel

With nearly 1.4 billion people, China is the most populous country in the world and is quickly becoming the largest source market for international travel. The potential for Chinese travel abroad is immense considering that today, just 5% of the population has a passport.

The increase over the last decade can be explained by speedy urbanization, easing of restrictions on foreign travel and increasing disposable income. The numbers confirm this. Chinese travelers made more than 67.5 million trips abroad in 2014, with record spending of $165 million. Tourism to China is also thriving, ranking 4th globally in terms of international arrivals (UNWTO data). Over 55 million international travelers visited China in 2014. 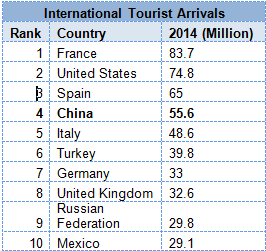 Today, China generates 13% of global tourism receipts, benefiting many destinations around the world, especially in Asia Pacific. What this means however, is that industry leaders must understand the needs of Chinese travellers. At the same time, the world needs to be ready to welcome them. According to a report published by Oxford Economics and InterContinental Hotels Group (IHG), by 2023 annual arrivals from China will total nearly 97 million globally.

In the next five years, 400 million people globally will enter the middle class, many of whom are likely to originate from the Asia Pacific region. Because tourism is a driver of growth and creates jobs, there is a strong incentive to attract this new middle class to your country. Chinese travellers are ranked among the top spenders both per trip and number of nights. It is expected that as Chinese households move towards the middle and upper classes, there will be a higher demand for long-haul leisure trips together with more luxurious accommodation and shopping. 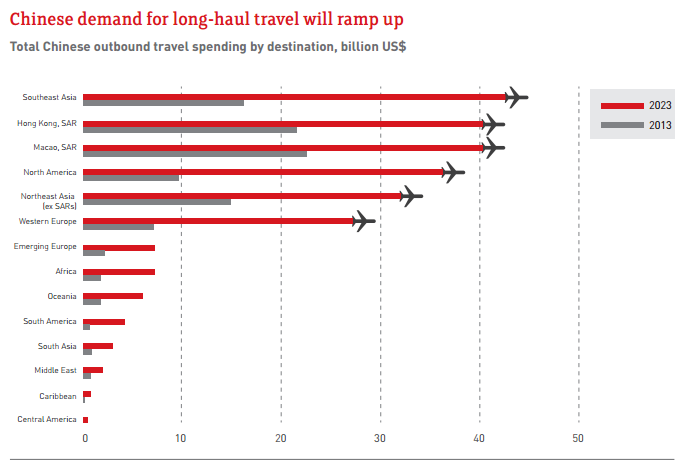 Source: The Future of Chinese Travel (2015) by IHG and Oxford Economics

According to IHG’s recent report, The Future of Chinese Travel, cities are the primary destinations for Chinese travelers: 85% choose major cities as their destination of choice.

While Chinese outbound travel is booming, China’s Travel & Tourism industry has the potential to become even more competitive as a destination. According to the Travel & Tourism Competitiveness 2015 report, China ranks 6th regionally and 17th globally. The country’s strengths lie in its rich cultural resources (4th globally) and natural resources (3rd globally in World Heritage Natural sites).

To continue building on its successes and boost the industry’s competitiveness, China should focus on policies to create a more enabling environment to do business. The country should also increase international openness, for example, in the area of ease of travel.

Destinations with simple access policies, such as undemanding visa procedures, will benefit the most from foreign tourism. This does not only apply to China. Research shows that simplifying access to travel for the Chinese traveler will lead to an estimated 20% increase in arrivals.