These countries are the most positive

Confounding the doom and gloom of the daily news headlines, Gallup’s 2015 Global Emotions report portrays a remarkably positive world, one in which a large majority of the global population say they smile and laugh a lot.

The report takes the emotional temperature in 148 countries by asking people whether they felt well-rested and respected, whether they learned or did anything interesting, if they smiled and laughed a lot, or if they had enjoyed themselves yesterday. To capture the negatives of daily life, respondents were also asked if they had experienced pain, worry, sadness, stress or anger the previous day.

1. Latin American nations are the most positive

For the first time, the top 10 are all in Latin America — the report’s authors put this down to the region’s generally strong sense of personal freedom and well-developed social networks. Meanwhile, the Middle East and North Africa is the least positive region, and former Soviet states dominate the list of nations experiencing the most negative emotions.

2. Nearly all countries have a majority reporting they laugh and smile a lot Predictably, countries experiencing conflict cluster together at the foot of the positive emotions table – Sudan is last, South Sudan and Ukraine are just outside the bottom 10. Yet all three had a majority saying they had smiled or laughed a lot the previous day. That figure dropped below 50% in just three countries: Tunisia (47%), Serbia (43%) and Turkey (43%).

3. Some nations have lots of positive and negative emotions

Gallup is careful to caveat its approach by saying that cultural factors mean some populations are simply more emotional than others – they simultaneously report lots of negatives and positives. It is difficult to adjust for this,so Gallup has provided a useful league table of the nations reporting the most and the least emotions. 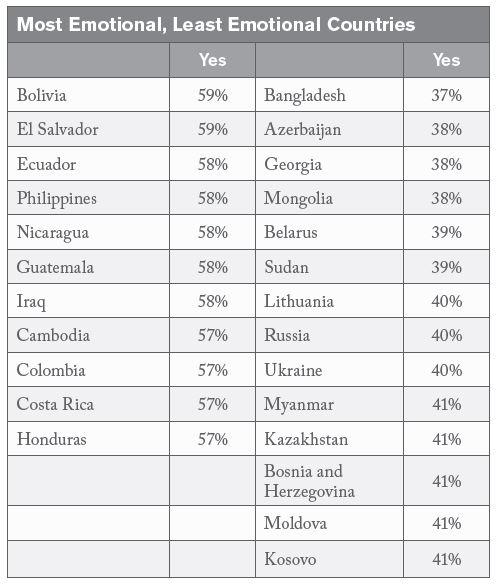 4. The world seems to be getting a little happier

The usefulness of measuring emotions and the wisdom of treating happiness as a policy target are questioned by many. But a growing number of economists, development specialists and some governments are searching for indicators that go beyond things like GDP to assess what money can’t buy and give a rounded view of the well-being of societies.

With the results from nine annual surveys now available, the Global Emotion report’s authors describe the trend as remarkably stable. If anything, there’s a very modest uptrend in positive feelings across the globe. Which might be a surprise to many and, depending on where you live, something to smile about.

Have you read?
How happy is the world?
Is happiness enough to replace GDP?
What would a fair business world look like?

Image: Children cheer at the opening of a psychological support centre for children in Da’el town, north of Deraa, Syria, August 1, 2015. REUTERS/Alaa Al-Faqir