What is the impact of low oil prices on inflation expectations?

The sharp decline in oil prices starting in late 2014 sparked a debate about their effect on inflation and the world economy (e.g. World Bank 2015). The decline in oil prices lowered inflation in the short run, and in some cases pushed some economies that were already experiencing very low inflation into deflation. More surprisingly, data from the US, the Eurozone, the UK, and Israel show that oil prices have a strong correlation with inflation expectations for the medium term, as measured by five-year breakeven inflation rates.1 Before the Global Crisis, this correlation was weaker and expectations were firmly anchored at the 2% level. However, from the onset of the Global Crisis, the correlation has been quite high (Table 1 and Figure 1).

In this column, we decompose the change in oil prices to global demand and supply shocks. Using this decomposition we show that following the onset of the Crisis, inflation expectations reacted quite strongly to global demand conditions and oil supply shocks. These findings suggest that the public’s belief in the ability of monetary authorities to stabilise inflation at the medium-term horizon has deteriorated. This could be due to:

Table 1. Correlation between five-year breakeven inflation rates and annual rates of change of oil prices in US$ (monthly, 2004M1-2015M6)

The effect of oil prices on five-year breakeven inflation expectations is surprising since oil-related products make up a small fraction of the CPI. One possibility is that oil prices affect production costs of many goods and, therefore, there is a strong and relatively quick pass-through from oil prices to the general price level. Another possibility is that global aggregate demand affects both the prices of oil and prices of other goods such that we observe a ‘spuriously’ high correlation between oil prices and inflation expectations. Any combination of these explanations is also possible.

Note: For the Eurozone, we used a GDP-weighted average of separately estimated breakeven rates for France and Germany.
Source: Bloomberg and the Bank of Israel.

We exploit the fact that a large number of commodities’ contracts are traded in financial markets. While each commodity is affected by idiosyncratic supply and demand shocks, they are also affected by common ‘global demand’ shocks. In fact, in the period we examine – 2000 to 2015 – the correlation between the main commodity indices, oil, metals, and agricultural goods, is above 40% (Figure 2 and Table 2).2 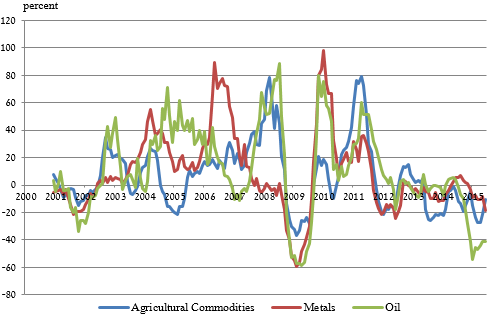 We extract the first principal component of the three indices – a factor that accounts for 70% of their common variation. We plot the first principal component and find that it tracks very well global economic activity (Figure 3).3,4 Focusing on the latest data points, we learn that global demand is decelerating. Therefore, part of the recent decline in oil prices reflects a slowing down of the world economy.

The economic press, however, focused on dramatic developments on the supply side of oil production, namely, increased competition from alternative energy sources. We use the commodity indices data to test this hypothesis. We regress oil prices on the indices of metals and agricultural commodities, controlling for weather conditions in the US and major agricultural producing countries in Latin America (Figure 4). The residuals from the equation capture the idiosyncratic shocks to oil prices. 5,6 We find highly negative residuals between November 2014 and June 2015 when oil prices fell significantly more than other commodities.

Figure 4. Oil prices diverged from other commodities in late 2014. Regression of oil prices on the prices of metals and agricultural commodities (monthly, 2001M1-2015M6)

We arrive at the same conclusion when studying the relationship between oil supply (quantities) and prices. A positive correlation between quantities and prices is suggestive of demand shocks and a negative one is suggestive of supply shocks. More formally, we regress a simple supply equation of the quantities of oil supplied on oil prices controlling (two-stage estimation) for global demand by using the measure (first principle component) we derived above. This allows us to identify supply shocks.7 Taking the results with appropriate caution (Figure 5), we note that recently, oil production has increased by 3% beyond what demand would have warranted.8

To conclude, our results indicate that the decline in oil prices reflects both a decline in global demand for goods and a large positive supply shock in the oil industry.

In order to capture the forces that drive global inflation expectations and examine the effects of oil prices on these forces, we extracted the first principal component of five-year breakeven inflation rates from the US, the Eurozone, Israel, and the UK. As is apparent in Figure 7, this factor is highly correlated with the first principal component of commodity indices, suggesting a high correlation between expected inflation and global demand.

In order to estimate the extent to which the global demand embedded in oil prices affects expected inflation, we decomposed oil prices in two elements: one capturing global demand effects; and the other capturing idiosyncratic supply effects.10 A regression of the first principal component of inflation expectations on decomposed oil price changes reveals a similar picture to the one portrayed in Figure 6. While prior to the Global Crisis neither type of change in oil prices was significantly correlated with inflation expectations, from the onset of the Crisis both types of changes have been significantly correlated. In Table 3 we derive the country-specific elasticities of oil supply changes on inflation expectations.11

Before the Global Crisis oil prices were not correlated with five-year expected inflation. During the Crisis, we saw that global demand and supply conditions reflected in oil prices became strongly correlated with inflation expectations. Examining the contribution of these factors (Figure 8) reveals that while both factors contribute more to the developments in inflation expectations, since the onset of the Crisis, global demand has a more dominant effect.12

Figure 8. The contribution of global demand shocks to expected inflation is much higher than that of oil supply shocks (monthly, 2005M1-2015M6)

What can explain this change? We offer two possible, mutually non-exclusive, explanations:

Before the Global Crisis, monetary authorities followed, or were expected to follow, a Taylor rule that puts a large weight on meeting the inflation target and little weight on stabilising output. Afterwards, monetary authorities were more concerned with stabilising the output (or employment) gap. It could be that the public interpreted this as a decline in the commitment to uphold the inflation target in the medium term. A variant of this explanation is that when inflation deviates below the target, the public believes that monetary authorities will be less aggressive in attempting to move it back into the target zone.

Some questions remain. Did inflation targeting become unanchored in the medium term? If this is the case, has future stabilisation of inflation become more costly (until the public learns that weight has shifted again to inflation)? Has the credibility of the monetary regime declined?

Authors’ note: The views expressed in this note do not reflect the views of the Bank of Israel or its Monetary Policy Committee.

1 For the Eurozone, we used a GDP-weighted average of separately estimated breakeven rates for France and Germany. In many economies the market for indexed bonds is too thin.

2 The correlation in levels is above 80%. However, since we are ultimately interested in the effect on inflation, we report the annual rate of change.

5 We controlled for shocks to oil demand by including weather conditions in the US. Details regarding the regression’s specification and outputs can be found in the full version of the article.

6 Interestingly, we find that after controlling for weather conditions, the elasticity of oil prices with respect to other commodity prices is about 0.5. This implies that the oil cartel smooths oil prices relative to the behavior of other commodities.

7 We controlled for idiosyncratic demand shocks to oil using weather conditions in the US. Details regarding the regression’s specification and outputs can be found in the full version of the paper.

9 Detailed specifications of these regressions are given in the full version of the paper.

10 The decomposition was conducted with a regression of oil prices on the first principal component of commodity indices. The fitted value from this regression represents the part of oil price affected by global demand, while the residual represents the part affected by supply. (To be more precise, the residual represents supply effects on oil prices as well as idiosyncratic demand effects. We controlled for the latter using weather conditions in the US.)

11 Details regarding the estimation procedure and outputs are given in the full version of the paper.

12  The contributions were calculated as the size of each shock multiplied by the estimated marginal effect of that shock on the principal component of breakeven rates.

Author: Nathan Sussman is the Director of research and a member of the monetary policy committee at the Bank of Israel and a professor of economics at the Hebrew University in Jerusalem. Osnat Zohar is an economist at the Research Department in the Bank of Israel. She has a Master’s degree in Economics and a B.Sc in Mathematics and Economics from the Hebrew University in Jerusalem.

Image: A worker walks down the stairs of an oil tank. REUTERS/Umit Bektas.

How can the oil and gas sector help in the drive to build back better?

COVID-19 and investor demands are driving change in the oil and gas sector. Here are three ways the industry can play its part in the Great Reset.

A new report from BP has shown that the world has already passed “peak oil” demand, and that demand for it could fall as much as 50% over the next 20 years.

This is BP's plan to become a renewable energy powerhouse

Rising CO2 levels could have 'very severe' global impact, according to the latest research