Which countries eat the most meat?

In some countries people eat a lot of meat. In others they don’t.

And while many might point to religious and cultural reasons as being the primary determinants of meat consumption, there’s certainly an economic component to it.

In a recent note to clients, Nomura’s Rob Subbaraman shared a chart that shows that there is a correlation between higher gross national income (GNI) per capita and larger per capita meat consumption in given country.

In layperson English, that means that people tend to consume more meat in countries where people have more money (and, therefore, discretionary income).

“In addition to the rapid growth of low-income households in emerging economies, there is a compounding effect from a change in their diet to more expensive protein — and nutrient-rich foods — such as meat, dairy products and seafood — as incomes rise,” writes Nomura’s Subbaraman. “This effect is compounding because it takes 1.7 lbs of animal feed (e.g. gain, soybeans) to produce 1lb of chicken, 2.9 lbs of feed to produce 1 lb of pork, and 6.8 lbs of feed to produce 1 lb of beef.” 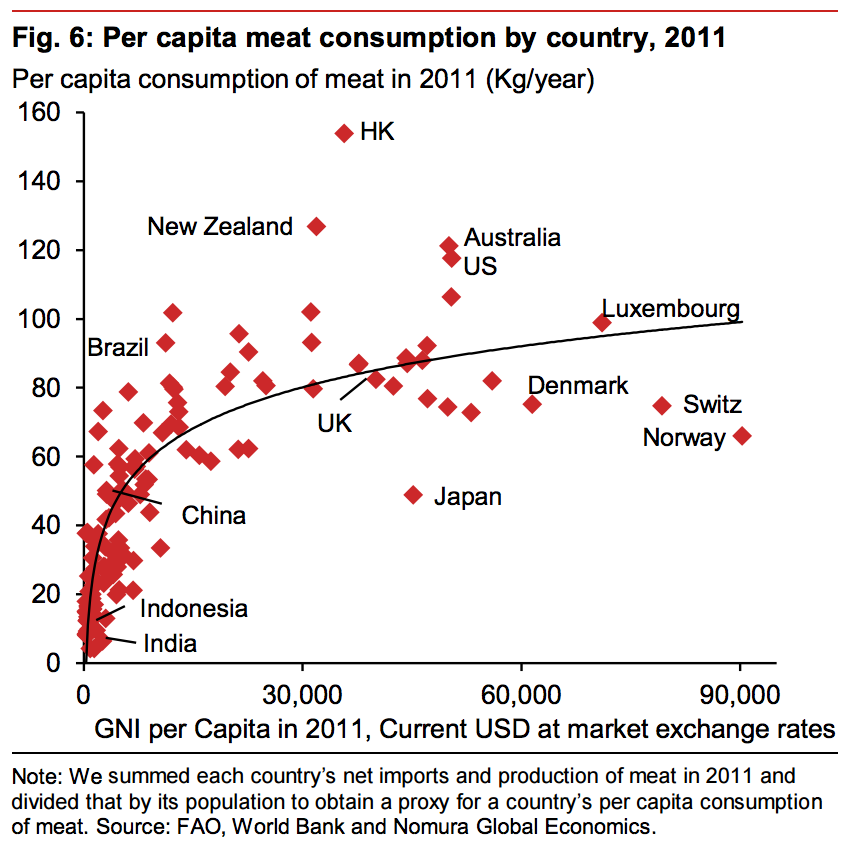 Image: A chef arranges a mini-cheeseburger at a preview of food to be served at the Governors Ball, during preparations for the 82nd Academy Awards in Hollywood March 4, 2010.     REUTERS/Danny Moloshok

How is COVID-19 affecting food security?

Join us for an online briefing food insecurity this Friday 29 May 2020 with experts from the International Fund for Agricultural Development (IFAD) and UN Goodwill Ambassadors for IFAD Id...

Pests in a pandemic? India's plant doctors will see you online now

During coronavirus lockdown, Indian farmers have been able to join 'e-clinics' to get a diagnosis of problems plaguing their crops, helping limit the damage.

Could urban farming be the answer to food insecurity in the U.S.?

How can we prevent a COVID-19 food crisis?

This entrepreneur is helping farmers get food to consumers during lockdown