After 2018, Greece has to access the market. The current package for Greece, the third in a row, will cover Greece’s financing needs until 2018. Are private investors willing to lend to Greece against an interest rate that the country can afford to pay over longer periods of time? If so, the country can manage its own financial needs. However, if there is substantial risk of Greece not meeting these obligations, then lenders will not be willing to extend these loans.

This column provides an assessment of the probability that Greece will obtain market access in 2018. Usually, debt sustainability analyses explore a couple of alternative scenarios to a central pathway (e.g. IMF 2015, De Grauwe 2015). It is not clear how much weight should be attributed to these alternatives and thus how relevant they are to investors. To calculate the relevance of the alternatives, a measure of the probability of alternative scenarios is necessary. I use the historic distribution of primary surplus, risk premiums, and economic growth in the EU to do so and add it to the central pathway in a simulation. The simulation yields a reasonable distribution for future debt ratios and financing needs. Consiglio and Zenios (2015) follow a similar route and focus on tail risk using a distribution of interest rates over the term structure.

I explore debt sustainability by simulating the Greek debt level and financing needs for 20 years from 2018 onwards. The starting point of the simulation is the situation in 2018 as foreseen in the current package between Greece and the authorities concerned (hereafter, ‘the programme’) (EC 2015a, 2015b). From 2018, the simulation follows the programme apart from three issues. It works with more cautious assumptions for the long term: 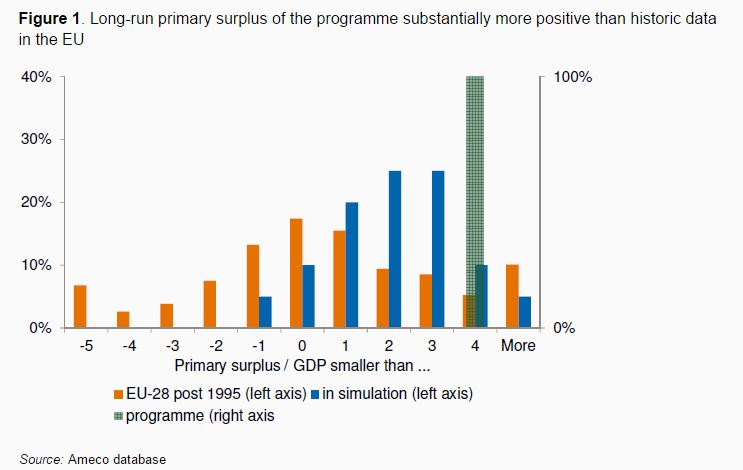 In this simulation, I account for uncertainty around the central pathway by imputing the variance of the primary budget surplus, the risk premium on debt vis-à-vis Germany and economic growth. The imputed variance is from macroeconomic time series of EU members over the past 20 years. Figure 2 shows the simulation results.

Figure 2. Greek debt decreases along central pathway, but the risk of an increase is substantial

Note: The dotted lines show the developments of debt and financing burden, under the surplus target of the programme (light blue) and the average historical surplus of the EU (dark blue).

The risk of a debt crisis with losses for private parties remains substantial when both the debt ratio and financing burden can remain high. Along the central pathway of the simulation, the debt ratio decreases (the orange line in the left-hand figure) from 2018 onwards, and over time will be lower than 120% of GDP (the supporting line). The financing burden along the central pathway (orange line in the right-hand figure) is limited during the first decade, after which it stabilises at around 15% of GDP (the supporting line). The supporting lines have been set at a debt level of 120% of GDP and a financing burden of 15% because these levels serve as anchors in the programmes for Greece. Above these levels, market access becomes difficult. The white and light orange planes indicate probability around the central path, based on historical data on the distribution of primary surplus, risk premium and economic growth. Under these assumptions, there is a 34% probability that the debt level will be higher than 120% after 20 years (in 2038) and a 48% probability that the financing burden will be higher than 15% of GDP between 2028 and 2038.

This autumn, the institutions will resume their talks with Greece about debt relief, with the main objective of ensuring that Greece will become financially self-supporting. This would require that the risk of a substantial debt increase under unfavourable circumstances is limited. The surplus on the long run is of crucial importance. Figure 3 below emphasises the related sensitivity of the debt level and financing burden. The figure on the left shows the average financing burden and debt level by 2038, and the figure on the right shows the chances of the financing burden being higher than 15% of GDP and the debt level being higher than 120%. Both chances look better under the programme’s assumptions, and worse under the historical average EU surplus.

Notes: The background colour indicates the long-term financeability of the Greek debt and runs from blue (safe) via white to red (high risk). For the averages, a limit of 15% of GDP was used for the financing burden and 120% for the debt level. The critical probability of exceedance of these limits was set at 28%. At an average loss from restructuring above this limit, this equals a risk premium that could still be financed by Greece.

Options for lowering the Greek debt burden to European countries

There are four often-mentioned options for lowering the current Greek debt burden to European institutions, shown in Figure 4 below. The first is a haircut of 30% on the financial claims on Greece. This substantially lowers the average debt level, the financing burden and the risk of both ending up higher, as shown in Figure 3. The second alternative to reduce the interest rates payable by Greece to the creditor’s cost price. This has the largest impact in the first few years of such loans, when the amount lent is the highest. This also has a positive impact on financeability of the Greek debt, but less so than that of a haircut. The third alternative is to extend the maturity dates of the loans with 40 years. The impact on the debt level materialises later than under interest rate reduction, but over time the results are comparable. The impact on the financing burden is more favourable than under interest rate reduction, and there is less risk of it ending up with substantially higher levels. The fourth alternative is to allow postponement of interest rate payments. This in particular reduces the financing burden in the short to medium run. Finally, as an alternative to debt relief, a fifth option exists that does not involve losses to public lenders: the European institutions could provide guarantees on new Greek debt to private lenders. This reduces the risk of the debt level and financing burden becoming higher.

From this analysis, two lessons can be drawn.

All options free up fiscal space that can be used to service new debt or to reduce the debt level and all options reduce the risk of ending up with substantially higher debt ratios and financing burdens.

To achieve the same results in terms of financeability in the central pathway simulation as under the programme’s assumptions, a number of measures have to be combined, or a haircut substantially larger than 30% of the debt to European partners must be engaged in.

It is with these two insights that policymakers have to confront the question of debt relief. Two questions have to be answered there: How much debt relief is necessary, and what kind of debt relief? The amount of debt relief is a function of the primary surplus that Greece can credibly commit to over the coming decades. Some relief is likely to be necessary. Eichengreen and Panizza (2014) argue that Greece cannot credibly commit to a 3.5% primary surplus. The second question is the timing and form of debt relief. As argued by Blanchard (2015), there is a balance between keeping the incentive to reform and permanently solving the debt issue. Postponing debt relief keeps the pressure to reform high, but does not create room for growth and investments that private investors would like to see, while fast debt relief creates such room, but also reduces the pressure on the need to reform – with possible negative effects for the budgetary policy in the long term.

Eichengreen, B and U Panizza (2014), “A surplus of ambition: Can Europe rely on large primary surpluses to solve its debt problem?”, NBER Working Paper 20316.

Author: Jasper Lukkezen is an economist at CPB Netherlands Bureau for Economic Policy Analysis, a think-tank of the Dutch government, and an assistant professor in macroeconomics at Utrecht University.

Image: A woman waves a Greek national flag (L) and a European Union flag during a rally outside the parliament. REUTERS/Yannis Behrakis.