Will the US or China be tomorrow’s economic superpower?

Is China on its way to becoming the world’s foremost economic superpower, as The Huffington Post and The Guardian claim? Or does the title remain with the US, As Time and Fortune argue? 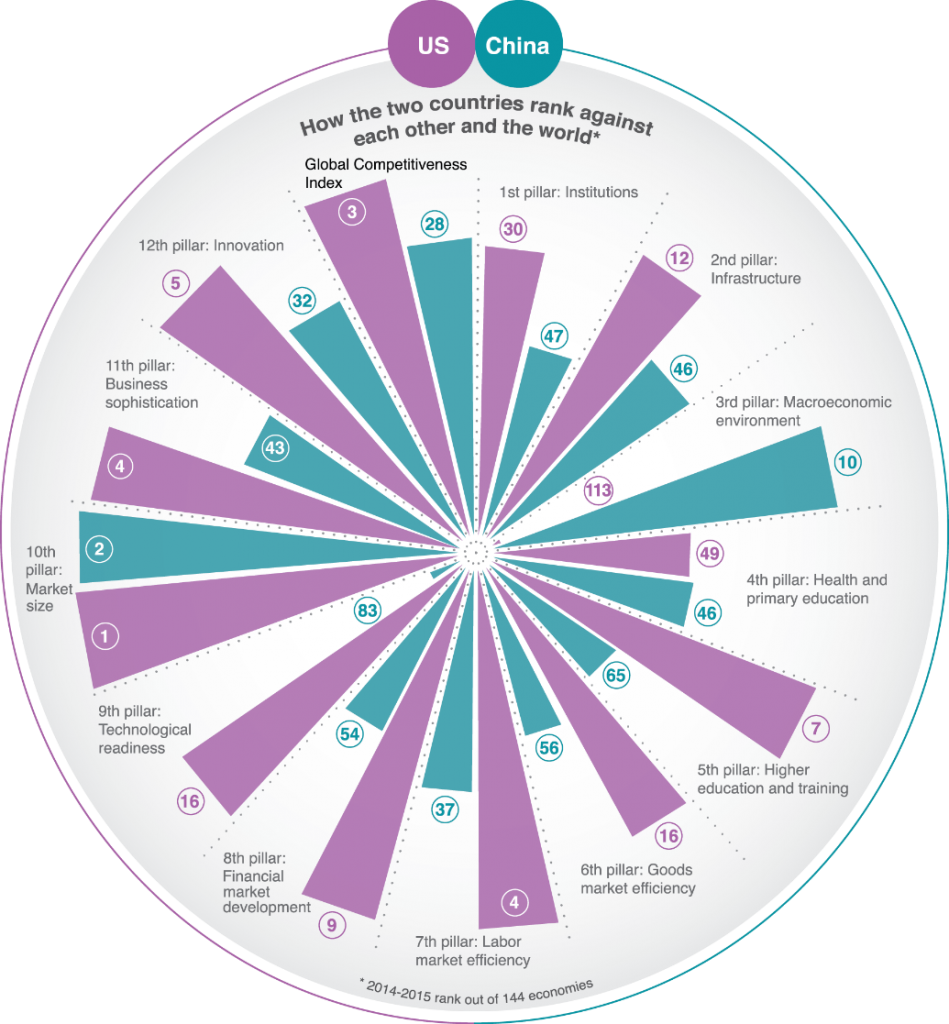 In the latest Global Competitiveness Index by the World Economic Forum, the US seems to keep the upper hand: it ranked as the world’s third most competitive economy, and the largest. China came in as only the 28th most competitive, and the second largest (see graph).

But as the Forum meets in China for its Annual Meeting of the New Champions, it seems the jury is still out. Let’s look at what the numbers and evidence say, based on three criteria: market size and growth, financial market development, and higher education and training.

Since the competitiveness report came out early this year, both the US and China have come out with new GDP numbers – and they were a turning point. For the first time in its modern history, China has eclipsed the US in terms of GDP. Based on purchasing power parity (PPP), China in 2014 had a GDP of $18.03 trillion, whereas the US reported $17.42 trillion, some $600 billion less.

But that doesn’t mean the US has lost its economic hegemony altogether. First, its non-PPP adjusted GDP remains far ahead of China’s; while America’s real and PPP GDP are the same at $17.42 trillion, China’s real GDP is $8 trillion lower, at $10.36 trillion.

And recent announcements show that their GDP is not set in stone. This week, China announced that it retroactively trimmed its 2014 GDP growth estimate to 7.3% from 7.4%. That news came as economists questioned whether China would achieve its 2015 growth target of 7%, as the country’s manufacturing index in August fell to a three-year low.

In contrast, the US last week revised its own annualized GDP growth rate for the second quarter of 2015 to 3.7%, up from an earlier estimate of 2.3%. As the BBC wrote: “The revision was welcome news to investors that have experienced a tough week on global stock markets, triggered by fears that the Chinese economy is slowing.”

Where do the largest initial public offerings happen, a proxy for where the largest public companies are? And which country has the most venture capital to fund the next Google or Alibaba?

China seems to have had the upper hand in recent years. The three largest IPOs ever involved Chinese companies: the Industrial and Commercial Bank of China in 2006 collected $19 billion when it went public. The Agricultural Bank of China in 2010 edged out ICBC with $19.2 billion. And Jack Ma’s Alibaba went public last year at a whopping $21.8 billion (followed by an additional sales option worth $3 billion extra a few days later).

But a closer look at the data reveals that the US stock markets remain more powerful for IPOs than China’s. First, 7 of the 10 companies with the largest IPOs either went public in the US or have a secondary listing there. The most famous example is Alibaba, which is Chinese but is listed and went public on the New York Stock Exchange. Second, companies listed on China’s foremost stock exchange, in Shanghai, very often internally back up their listing with a primary or secondary listing in Hong Kong, whose stock exchange operates independently.

When it comes to venture capital – intended to fund the world’s next corporate giants when they are still start-ups – the US is still Valhalla. As we wrote in an earlier post on Agenda, the US has by far the most venture capital available: $52 billion in 2014, compared to China’s $15.5 billion. But it cannot rest on its laurels: in just a few years, China doubled its global share of venture capital, from an average of 9% in the period 2006-2013 to 18% in 2014, whereas the US share declined from 70% to 60% over the same period.

Yet again, the balance is evolving. The redundancy of capital reserves that the Chinese state, its investors and its companies built up over the last years – which was partially used to buy foreign companies or invest in venture capital – has recently gone down. As the FT wrote this week, capital flight is now the big concern for slowing China. “Suddenly, the question has shifted from what China will do with all the capital that flowed in and its arguably excessive reserves to whether it has enough money and adequate reserves at all.”

The last factor is higher education, as a proxy for long-term prospects for economic growth. Again, there are two sides to the story. According to the Times Higher Education, 14 of the 20 best universities in the world are in the US, including the top two. China has only two in the top 50, at places 48 and 49. Other rankings, such as the QS, show similar balances in terms of top universities (QS puts 12 US universities in the world’s top 20, and only one Chinese in the top 50, at place 47).

That translates into a much higher attractiveness of US universities relative to China’s. According to the US Institute of International Education, China sent a record 274,000 students to the US in academic year 2013-2014, more than any other country ever. In contrast, just under 15,000 American students went to study in China.

Of course, it might in the long run lead to a stronger academic performance by Chinese universities, as many Chinese students will return to China after their studies in the US, participating in the Chinese economy and strengthening the foundations of Chinese universities.

China has already reinforced its lead at the top of the developing world’s universities, according to the latest Times Higher Education Supplement ranking of the BRICS (Brazil, Russia, India, China, and South Africa) and emerging economies. Peking University and Tsinghua University take the top two slots, and Chinese universities account for 27 of the top 100 places (up from 23 in 2014).

Who will be the world’s economic superpower in the 21st century, the US or China? It’s up to you to decide.

Have you read?
6 charts that explain China in the global economy
Who would benefit from a US rates hike?

Author: Peter Vanham is a media strategist at the World Economic Forum and a freelance business writer