15 technologies that could end our reliance on carbon

Many scientific analyses suggest the world will need to be running a zero carbon-emitting energy supply well before the end of this century if we are halt runaway climate change.

That’s a tall order – because that energy supply will need to substantially grow in size. One billion of the world’s population has no electricity, and another billion has only minimal access. Our planet is powered 80% by fossil fuels and energy infrastructure lasts for half a century, while new technologies take decades to commercialize and penetrate markets at significant levels.

That’s the bad news. The good news is that we have low carbon energy options. Lots of them. And we also have an understanding of how to begin to realize those options within the next 15 years at very large scale.

Those are the key messages of a white paper being released this week by the World Economic Forum’s Global Agenda Council on Decarbonizing Energy, called Scaling Technologies to Decarbonize Energy. The work of twenty experts, all members of the Council, the white paper is an inventory of a variety of powerful tools we have to produce zero carbon energy – all of them technically demonstrated, and many of them on a commercial scale.

The table below, taken from the paper, lists the variety of options available, from power generation to end use to liquid fuels. Not surprisingly, a lot of focus is on the power sector. That’s because power emits nearly 40% of the world’s energy-related carbon dioxide. It’s also because the route to decarbonizing energy will mean the electricity sector is likely to grow, displacing direct fuel use in transportation and industry. The short term, five year options, are plentiful. The world continues to improve the efficiency of end uses, although due to increased energy use as the developing world modernizes, the world struggles to maintain a steady reduction in the energy intensity (and therefore the carbon intensity) of global GDP.

Nuclear energy already supplies 11% of the world’s electricity, and wind and solar provide another 5% (although this figure is about 20% in nations like Germany). Wind and solar are growing steadily and represent the majority of new electricity capacity installed in 2014. However, due to their low capacity factor, they will produce less than half the annual electricity of the coal and gas plants installed in that year. And, while more than 60 nuclear reactors are currently under construction around the world, plant retirements and long lead times make increasing its share of global electricity a big challenge.

The invention of new technologies is not required. We simply need to do a lot better at scaling these technologies, and the white paper offers a variety of ideas about how to do this. 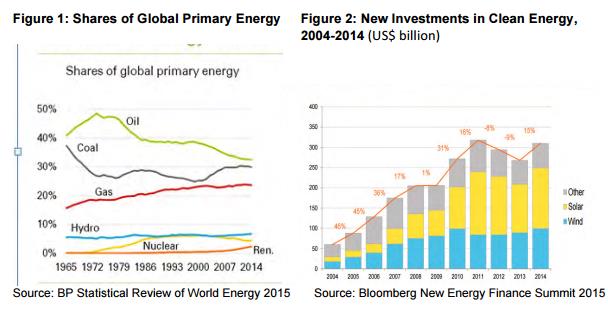 Looking beyond the next five years, our leverage gets potentially greater as we can see the commercialization of game-changing technologies such as advanced power storage, carbon scrubbing technologies, safer and less expensive nuclear reactors (many radical departures from today’s light water designs), and advanced geothermal and ocean energy. Here the focus shifts to an intensive programme of demonstration and commercialization, and this will require both “push” and “pull” policies.

With 15 options, and 15 years, we can accomplish a lot. None of this is rocket science, but neither is it easy to do. Contrary to belief in some quarters, energy is not like information technology; otherwise, today’s zero carbon energy plants would be just a few percent of the cost of those available a decade ago, with performance many times better. Decarbonizing global energy supplies will require a steady, strategic approach by industry and government. We can do it, but we need to start now.

The Summit on the Global Agenda 2015 takes place in Abu Dhabi from 25-27 October. The report, Scaling Technologies to Decarbonize Energy, is available here.

Image: A man shows his hand at a charcoal factory at a village in Qaha, El-Kalubia governorate, near Cairo, May 7, 2015. REUTERS/Amr Abdallah Dalsh

What’s for lunch? Sustainability on the Davos menu

Microsoft wants to erase its carbon footprint - past and future

The powerful connection between inequality and climate change