Can banks avoid regulation by borrowing from abroad?

Following the Global Crisis, macroprudential policies have become part of many central banks’ toolkits. These instruments are being actively used to address cyclical and structural risks within financial systems – and as such, there has been extensive debate about the use of different instruments for different microprudential and macroprudential objectives.

There is a recent and rapidly expanding literature on the effects of macroprudential instruments (Lim et al. 2011, Vandenbussche 2012, Classens et al. 2013, Kuttner and Shim 2013). But the effectiveness of these instruments may be compromised if banks and borrowers are able to avoid these measures via regulatory arbitrage or if the regulation is subject to ‘leakages’ whereby the activity migrates to institutions that are not covered by the instruments.

Much of the debate over leakages has focused on lending by ‘shadow banks’ or non-bank financial institutions, but another kind of regulatory leakage stems from internationally active banks. Some macroprudential instruments – in the absence of reciprocal arrangements – cannot be applied to all financial institutions within a country. As an example, capital regulation may apply unevenly as foreign branches and cross-border lending are not necessarily subject to the same regulatory measures as domestically-regulated banks. In contrast, product regulation, such as placing a limit on the maximum loan-to-value mortgage a household can get, usually applies to all products sold in a particular country.

Differences in regulation are a significant driver of cross-border banking, as banks expand lending to countries with lower regulatory standards (Houston et al. 2013, Ongena et al. 2013). Aiyar et al. (2012) examine the issue of leakages for time-varying in minimum capital requirements in the UK and find that foreign branches can be a considerable source of ‘leakage’ as they expand their lending into the UK after an increase in UK banks’ capital requirements because they are not subject to the capital requirements. We examine whether these leakages apply to a broad range of macroprudential instruments in a cross-country study (Reinhardt and Sowerbutts 2015).

To examine the question of different instruments, we use a new database on macroprudential policies This database builds on the work by Lim et al. (2011) and Kuttner and Shim (2012), but continues to update their work to 2014 by hand-collecting data from regulators’ websites, financial stability reports and communication with relevant authorities. This allowed us to build a dataset containing information on a wide range of macroprudential policy actions in 70 countries over the period 1990 to 2014. Time series data of capital and lending standards actions, which are the main focus of this paper, are illustrated in the figures below. 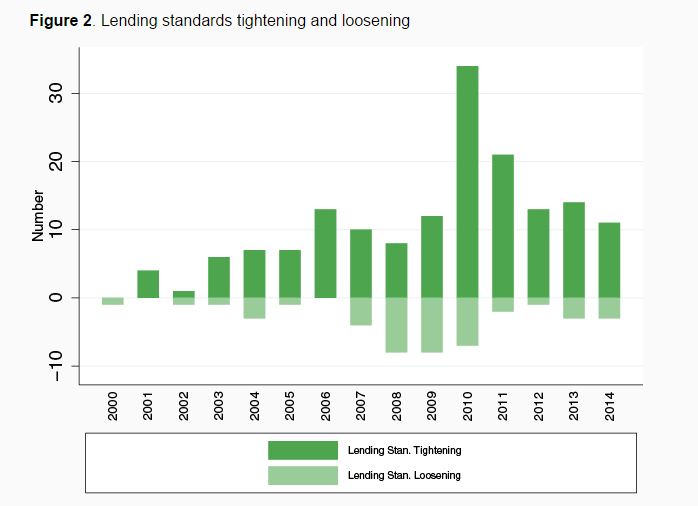 We group together applications which are similar in terms of their regulatory application, so for example all risk weight and capital requirement actions are combined to create the variable ‘capital’. Similarly, actions such as limits on loan-to-value ratios, debt service ratios and repayment periods are grouped as ‘lending standards’, given that these all apply to borrowers, are introduced via the same framework of regulations and are frequently taken at the same time.

To examine potential leakages, we examine how non-bank borrowing from foreign banks – using the UK Department for Business, Innovation and Skills (known as ‘BIS’) consolidated banking statistics – changes after that country’s authorities take a macroprudential action. We estimate tightening and loosening effects separately. We include a number of controls including domestic credit growth, as by controlling for the domestic credit cycle, we focus our attention on changes in foreign bank lending growth over and above changes in domestic credit growth, such as lending driven by changes in the relative competitive advantage of foreign banks vis-à-vis domestic banks.

We are agnostic about the time-period over which macroprudential policy may affect banking flows and so we vary the lag structure of the ‘macroprudential’ variable to let macroprudential actions affect borrowing from foreign banks over different time horizons.

The figure plots the regressions coefficient of macroprudential policy dummies on non-bank borrowing from foreign banks and their confidence intervals for various options for the lag structure on these dummies (and conditioning on other factors).

The results suggest that a tightening of capital regulation induces domestic non-banks to increase their borrowing from foreign banks, while a tightening of lending standards does not have the same effect, which suggests that uneven application of bank capital regulation may be a driver of international banking flows. This is over and above the effect, which has been documented extensively in the literature mentioned above, where banks transfer funds to markets with fewer banking regulations. Our results show a subtle contrast – banks transfer funds to countries that tighten regulatory standards, but transfer these funds when the regulatory tightening does not apply to them, and instead confers upon them a competitive advantage.

Authorities are able to apply capital regulation to subsidiaries that they supervise, but not branches. This suggests that leakages should occur via branches. By accounting for measures of the relative of importance of branches versus subsidiaries taken from Fiechter et al. (2011), we show that the evidence on leakages is indeed stronger for banking systems where foreign affiliates are mainly organised as branches.

Our results also suggest that instrument choice matters for the effectiveness of macroprudential policy. Indeed, some of the results in the literature – which focuses on the domestic effects – may be influenced by how open and subsidiarised the country’s banking system is, and the fact that currently reciprocity arrangements only apply to the countercyclical capital buffer. Our research is supportive of building strong reciprocity frameworks with a high degree of automaticity as the leakage occurs soon after the action is taken.

It is a welcome fact that reciprocity of the countercyclical capital buffer is a cornerstone of Basel III, and EU law requires automatic reciprocation of CCB rates from 2016. These rules do not, however, proscribe rules for all potential macroprudential instruments. The results presented in here suggests that there are also likely to be leakages with regard to other capital and liquidity-like policies suggesting that there may be benefits from extending the principle of reciprocity further. At the European level, assessing the cross-border impact of macroprudential policies and coordinating member states’ actions is at the heart of the mandate of the European Systemic Risk Board. Capital rules (CRD IV/CRR), which have been in force since 1 January 2014, already foresee some coordination procedures involving the European Systemic Risk Board for specific instruments. But more work needs to be done on working out an optimal and feasible reciprocation and coordination strategy.

European investment funds are heavily exposed to climate risks. We've examined over 23,000 funds and can reveal the long-term benefits of green funds.

6 issues that will define the future of capital markets