Countries with the most and least road traffic deaths

The World Health Organisation (WHO) has released its Global Road Safety report 2015, and named Libya as the nation with the highest rate of road traffic deaths – some 73.4 deaths per 100,000 people every year.

The following charts show the countries with the highest and lowest road traffic death rates, according to 2015 WHO estimates. 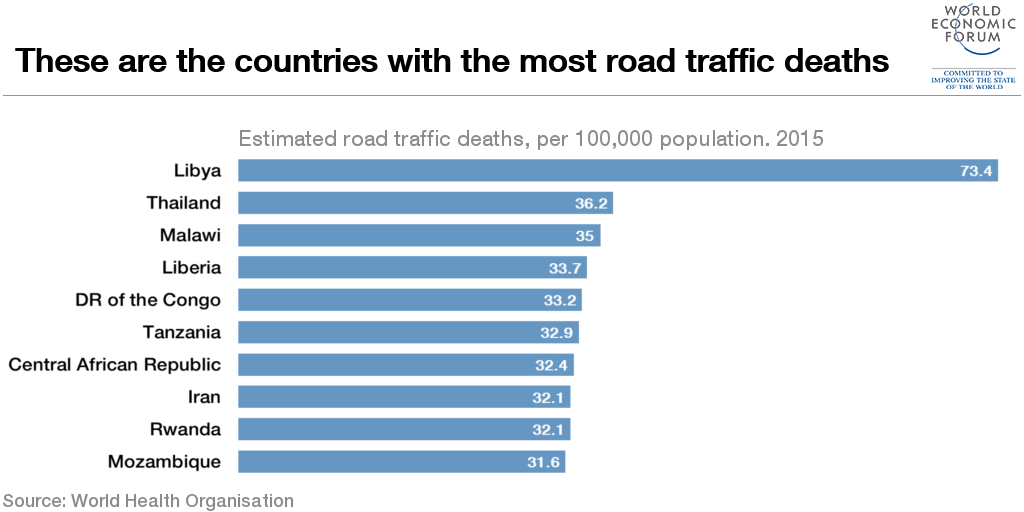 African nations dominate the list, with the WHO highlighting the gap between high-income countries and low- and middle-income countries. Of all road traffic deaths, 90% occur in developing countries, despite them having just 54% of the world’s vehicles.

The other end of the scale is illustrated in the chart below, with the fewest deaths taking place in the Federated States of Micronesia, which has a rate of just 1.9 deaths per 100,000 people. A number of other European nations feature in the top 10, with Switzerland in fifth, the Netherlands in sixth and Denmark in eighth. Smaller nations with low numbers of vehicles feature across the list – including Micronesia, Kiribati and the Maldives.

Have you read?
How South Korea has reduced road deaths
The 10 most dangerous countries for aid workers
Can we design cities that don’t need cars?

Cybersecurity's visibility problem: if a self-driving car crashes, whose responsibility is it?

UNICEF and WEF call on logistics firms with international and local footprint who want to be a part of the global collective vaccine distribution effort.

Supply chains can be a climate game-changer. Here's why