Four things Turkey did for business in the G20

As we are coming closer to the B20 Summit in November, B20 Turkey is getting ready to pass the baton on to its partners from China.

The B20 started as a loose network of global businesses to engage with the G20 in South Korea in 2010. Hosted by the business community of a G20 recipient country ever since, the B20 is now the G20’s oldest and most structured engagement group. At the end of Turkey’s tenure, here is a summary of what we achieved.

From the outset, B20 Turkey prioritized implementation. The global business community has been developing a large set of recommendations to the G20 for years. What is the end result? Without implementation, another long document in this literature does not add too much value.

Therefore, we pushed the five taskforces that Turkey took over from Australia towards advocacy and refinement of the existing sets of recommendations. These taskforces are infrastructure and investment, trade, employment, financing growth, and anti-corruption – the last one was turned from a study group into a full-fledged taskforce this year.

Members in each of the taskforces picked two out of the existing five to six recommendations during an initial scoping exercise, tested barriers to implementation with policy-makers in their countries using advocacy papers, and then refined the recommendations based on the feedback received.

For instance, the trade taskforce focused on the ratification and implementation of the Trade Facilitation Agreement, and localization discussions on the non-tariff barriers to trade. The financing growth taskforce focused on SME financing, and the impact of the new financial regulations. The implementation focus transformed the B20 recommendations from a wish-list to an action-oriented to-do list for the G20 policy-makers.

Another novelty of B20 Turkey’s approach is its growing cooperation with think-tanks world-wide. It has become a tradition by now that top-tier international management consulting firms engage with the B20 as knowledge partners. In this role, they moderate taskforce meetings, and draft policy papers.

This year, on top of this traditional collaboration with knowledge partners, the B20 has become more engaged with leading think-tanks that specialize in economic and policy analysis.

TEPAV, Turkey’s largest economic policy think-tank that also chaired the Think 20 event this year, led the content development for B20 policy recommendations, as well as for B20 events organized throughout the year. At the B20 Trade Taskforce, the Peterson Institute for International Economics worked side by side with the knowledge partner while drafting the policy paper. These collaborations helped both put business perspectives into the policy frameworks, and add the policy lingo to the business proposals.

After three in-person meetings held in Istanbul, Washington D.C., and Paris, and a number of teleconferences, the B20 taskforces finished their policy papers in September, and a synthesis paper with all the B20 policy proposals was put together. The final set of 19 policy recommendations were carefully crafted by a team of business and policy leaders. B20 Turkey pushed stakeholders hard to be inclusive in terms of ideas the B20 was bringing in, and to produce a high-quality policy document with not just recommendations, but also a well-founded analysis of underlying government and market failures where intervention from the G20 is most justified.

While prioritizing implementation, B20 Turkey also expanded the set of recommendations in certain limited areas. One major new area was the digital economy. Over the last decade, digital technologies have become fundamental to competitiveness and growth for companies, at the micro-economy level, and countries at large.

Yet digital technologies, along with their benefits, bring with them new economic and regulatory challenges. While no specific taskforce was established to study the digital economy, it has been a cross-cutting theme for all taskforces. Relevant recommendations from all the taskforces were brought together for the G20 leaders’ consideration in a separate policy paper, which was launched at the first-ever B20 Digital Economy Forum held on the margins of the G20 Trade Ministers meeting. The B20 community would like to see the digital economy topic developed further during the Chinese presidency, for the recommendations to be refined by a separate G20-B20 study group.

Another major novelty that Turkey has brought into the B20 is inclusivity. So far, despite the global economic trends of the rising influence of SMEs and start-ups on the one hand, and emerging market economies on the other, the B20 has been dominated by large businesses from North America and Europe.

This is despite of the fact that emerging markets are home to high-growth companies – according to the Boston Consulting Group, the number of emerging market based companies with over 1 billion USD annual sales has more than tripled to 1,700 in the last decade. However, they have not been included enough in the B20, due to a lack of awareness or dedicated resources.

On its inclusivity agenda, B20 Turkey took two main actions.

First, to ensure geographic inclusivity, B20 Turkey started regional consultation meetings. Given the fact that many emerging market businesses either are unaware of B20 engagements, or lack resources to participate to B20 taskforces, these meetings were held in major emerging markets hubs and/or on the margins of critical international gatherings.

Indeed, the B20 covered four continents with meetings in Jeddah, Delhi, Singapore, St Petersburg, Sao Paolo, Baku, as well as in Addis Ababa (Financing for Development Conference), Maputo (Annual Meetings of the Islamic Development Bank Group), and Torino (World Chambers Congress). The B20 reached out to 950 business executives, 52 of which were from non-G20 countries, and most of which were new to the B20 process.

During regional consultations, which were organized in the first half of the year, the B20 tested taskforce recommendations while they were under development, and incorporated the feedback into the taskforce process. 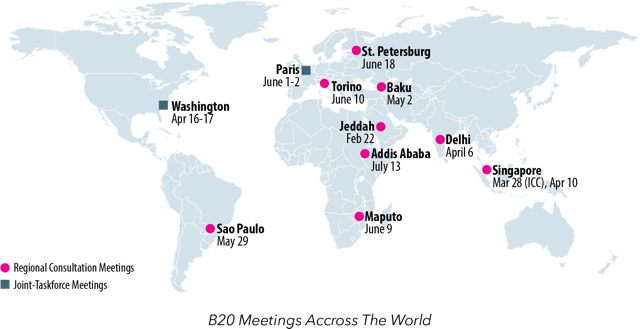 Second, B20 Turkey set up a separate taskforce – SMEs and Entrepreneurship Taskforce – to develop SME-specific recommendations. Indeed, according to OECD research, SMEs employ more than two thirds of the private sector workforce in Brazil and 17 select OECD countries. However, their interests are often over-looked by policy-makers, and they are struggling to access global value chains.

The taskforce pioneered the World SME Forum, an institution that is specifically structured to assist in carrying out many of the B20’s SME-related recommendations. The World SME Forum, established by the International Chamber of Commerce and TOBB, and acknowledged by the G20 finance ministers, has become one of the most important tangible B20 outcomes. The business community would like to see its responsibilities expanded to ensure effective follow-through of the recommendations proposed.

Changes towards a better global policy environment to enable the private sector to thrive are not made overnight. B20 Turkey has seen itself as part of a larger and long-lasting effort.

With that in mind, it created the International Business Advisory Council, which includes leaders of major business umbrella organizations worldwide, as well as select CEOs. The Council is planned to maintain a core membership from year to year, and continue its advocacy efforts year-round. With the B20 hat going from one country to another, the global business community believes in the continuous and dedicated efforts of its leaders to implement recommendations to ensure strong, sustainable and balanced growth.

Authors: Sarp Kalkan is the B20 Sherpa for Turkey, Ussal Sahbaz is the director of G20 Studies Center at TEPAV and content lead for B20 Turkey, Anna Kurguzova is a content manager at B20 Turkey

More on Turkey View all

How reskilling can play a key role in Turkey’s recovery

Turkey must reskill more than 21 million workers to meet the demands of the future of work. The new Turkey Closing the Skills Gap Accelerator will help.

More than a decade after a global financial crisis that spawned new policy tools designed for traumatic events like COVID-19, will they be enough?

How this Turkish city went from dumping ground to destination

Is there a new debt crisis on the horizon?