Have links between exchange rates and trade weakened?

The IMF writes that recent currency movements have been unusually large. The U.S. dollar is up more than 10 percent in real effective terms since mid-2014. The yen is down more than 30 percent since mid-2012 and the euro by more than 10 percent since early 2014. Such movements, although not unprecedented, are well outside these currencies’ normal fluctuation ranges. Even for emerging market and developing economies, whose currencies typically fluctuate more than those of advanced economies, the recent movements have been unusually large.

The IMF writes that concerns about a disconnect between exchange rates and trade are not new. Back in the 1980s, the U.S. dollar depreciated, and the yen appreciated sharply after the 1985 Plaza Accord, but trade volumes were slow to adjust. By the early 1990s, U.S. and Japanese trade balances had adjusted, largely in line with the predictions of conventional models. The question is whether this time is different, or whether the apparent disconnect between exchange rates and trade will once again dissipate.

The IMF writes that following aggressive monetary easing by the Bank of Japan, the yen has depreciated by about 35 percent in real effective terms during that period. This depreciation has come after a sharp yen appreciation from 2008 to 2011. Josh Hausman and Johannes Wielandwrite that between the fourth quarter of 2012 and the second quarter of 2015, real exports grew 15% and real imports grew 12%.

The IMF writes that Japanese exporters have long demonstrated pricing to market behavior by maintaining the stability of their export prices in overseas markets and absorbing exchange rate fluctuations through profit margins. This practice results in limited exchange rate pass-through to export prices. Analysis based on rolling regressions suggests that exchange rate pass-through has declined from near 85 percent during the 1980s to about 50 percent in recent years.

Josh Hausman and Johannes Wieland write that while one might have hoped for (even) stronger export growth, the larger mystery is why real import volumes have grown so rapidly despite a weaker yen and slow real output growth. One might wonder if Japan’s import prices have in fact increased. Perhaps the combination of falling commodity prices and pricing-to-market for other imports meant the yen depreciation was not associated with higher import prices. But the data suggest otherwise. Measured by the import price deflator, between the fourth quarter of 2012 and the second quarter of 2015, import prices rose 7.0%. To be sure, this is far less than the yen depreciated, but it is nonetheless substantial. It fits with the results inGopinath (2015) showing rapid pass-through from yen movements to Japanese import prices.

Josh Hausman and Johannes Wieland discuss three popular hypotheses for the large increase in real imports — a decline in the relative price of imports, an increase in energy import demand, and an increase in foreign electronics demand —, but find all of them to be either unsupported by the data or too small to explain the size of the import increase.

To check whether the estimated links between exchange rates and trade have weakened, the IMF estimates the trade elasticities already discussed for successive 10-year rolling intervals. The first 10-year interval used for estimation is 1990–99 and the last is 2005–14. Structural-break tests for a number of different samples confirm this finding of broad stability in total trade elasticities over time. 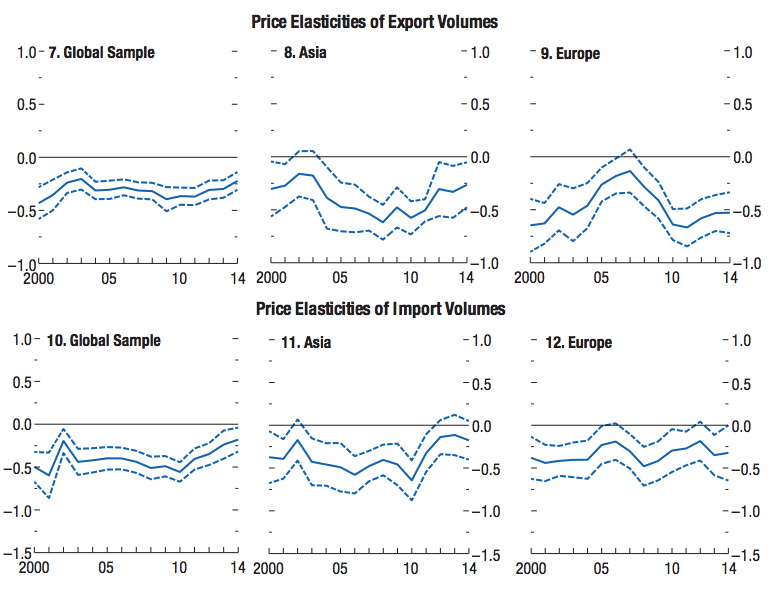 The IMF writes that It has been suggested that the increasing participation of firms in global value chains has reduced the relevance of exchange rate movements for trade flows, as in recent studies conducted at the Organisation for Economic Co-operation and Development (Ollivaud, Rusticelli, and Schwellnus 2015) and the World Bank (Ahmed, Appendino, and Ruta 2015). But, although this weakening can be found for certain economies and products, little evidence shows that it has led to a more general disconnect.

Javier Cravino and Andrei A. Levchenko write that large exchange rate devaluations are associated with dramatic changes in relative prices. In the aftermath of a devaluation, the price of tradeable goods “at the dock” moves one-for-one with the exchange rate, the retail price of tradeable goods increases, though less than the exchange rate, while non-tradeable goods’ prices are relatively stable. It is well known that households at different income levels consume very different baskets of goods. Across product categories, low-income households spend relatively more on tradeables (such as food), while high-income households spend relatively more on non-tradeables (such as personal services). Within product categories, low-income households spend relatively more on lower-end goods purchased from lower-end retail outlets. Changes in the relative prices of tradeables and of low-priced varieties following a large devaluation will thus affect households differentially, generating a distributional welfare impact. Combining these two effects, the authors find for the 1994 Mexican case that the households in the bottom decile of the Mexican income distribution experienced increases in the cost of living between 1.46 and 1.6 times higher than the households in the top decile in the two years that follow the devaluation.

Timothy Taylor writes that the relatively benign outcome from shifts in exchange rates is that they tweak prices of exports and imports up and down.The deeper concern arises if the movements in exchange rates lead to substantial debt defaults, or to “sudden stop” movements where large flows of international financial capital that had been heading into a country sharply reverse direction. In the last few decades, this mixture of debt problems and sudden shifts in international capital flows changes has been the starting point for national-level financial crises in east Asia, Russia, Latin America, and elsewhere.

More on Trade and Investment View all

Sub-Saharan Africa has been hard hit by the pandemic. With rising energy and food prices the region needs to achieve free and secure trade more than ever.

This new alliance is helping grow collaboration on international investment

How to build resilience in emerging economies? Support small businesses