How accurate are companies’ inflation expectations?

Central bankers increasingly emphasise the importance of the general public’s expectations, and in particular, of maintaining low and stable ‘well-anchored’ inflation expectations (Bernanke 2007). Unanchored inflation expectations are generally believed to have contributed to the Great Inflation in the 1970s and the subsequent cost of bringing down inflation over the following decade. To measure inflation expectations, central banks rely on macroeconomic surveys of professional forecasters, very large firms, and households. The former two types tend to be exceptionally well-informed, whereas the latter are much less so. What is notably absent from the set of available surveys are quantitative measures of firms’ expectations.

In a recent study, (Kumar et al. 2015) we utilised a new large-scale survey of managers of New Zealand firms, which we implemented between 2013 and 2015, to assess the extent to which inflation expectations of firms in New Zealand are anchored. Because New Zealand has had an inflation-targeting regime and low inflation for over 20 years, it presents a particularly apt setting to characterise how anchored inflation expectations can become. But we also verify that our main results carry over to the US.

Average beliefs are not close to the inflation target

Anchored expectations imply that the mean forecasts of inflation across agents remain stable and close to the central bank’s inflation target, especially in the long run. Table 1 reports the 12-month and the 5-10 year average inflation forecasts for New Zealand firms.1 For comparison, we also report other available forecasts: RBNZ (central bank forecasts), Consensus Economics (professional forecasts), and households (RBNZ Survey of Households). In all cases, the average of firms’ forecasts is well above the inflation target and also above the forecasts of most other agents. The cross-sectional dispersion in 12-month ahead inflation forecasts of firms also exceeds that of central banks, professional forecasters, and households every quarter. Moreover, we find significant dispersion in beliefs even about long-run inflation.

Table 1. Inflation forecasts of firms and others for New Zealand

Anchored expectations should be such that one perceives little risk of either high or low inflation in the future. Hence, the range of possible outcomes for inflation considered realistic by agents should be quite limited if expectations are well anchored, and their confidence in their forecasts should therefore be relatively high. To quantify this notion, we assessed the degree of uncertainty in New Zealand firms’ forecasts by asking managers to assign probabilities to a range of possible inflation outcomes. Using these distributions, we computed the standard deviation of each manager’s forecast. Figure 1 reports the distribution of these standard deviations. The average standard deviation is 2%, implying that firm managers have a lot of uncertainty around their forecasts. Furthermore, there is considerable heterogeneity in the degree of uncertainty associated with individuals’ forecasts. 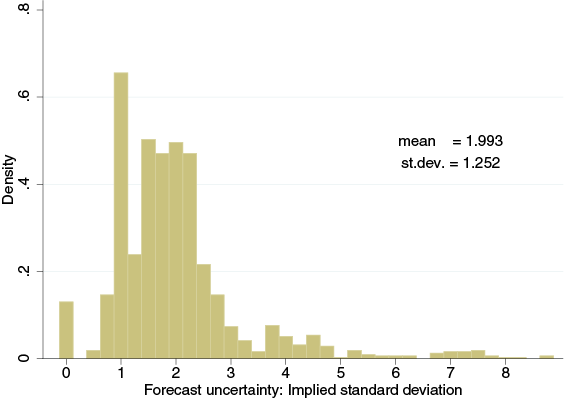 Where does this variation in inflation expectations come from?

To understand why managers display such divergent beliefs about inflation and so little evidence of anchoring, we asked them to define inflation, thinking that perhaps they did not understand the concept (as is the case with many households), but almost 90% could define inflation correctly and those that did not made relatively minor errors. Managers also agreed to a surprising extent about recent price changes for individual categories of goods. In fact, for most categories, managers agreed more with one another about the rate of recent price changes than they did about aggregate price changes.

Given New Zealand’s long history of inflation targeting, one might wonder whether the absence of more anchored firm-level inflation expectations reflects a lack of credibility on the part of the central bank or a dearth of knowledge about monetary policy on the part of managers. The answer appears to be the latter. Managers are very confident in the ability of the central bank to control inflation over both the medium and the short term; over 95% of them answered that the central bank could control inflation both over the next 5-10 years as well as over the next 12 months. However, only around 30% of managers were able to correctly identify (out of four possible answers) the governor of the RBNZ, few knew that the RBNZ has inflation targeting in its mandate, and most managers could not identify the specific inflation target range. Those managers who had more knowledge about the actions and objectives of the RBNZ, however, knew more about recent inflation dynamics and made lower and more confident inflation forecasts than other firm managers.

Better knowledge about monetary policy appears to be systematically related to firms’ and managers’ incentives to collect and process macroeconomic information. For example, firms which receive larger shares of their revenues from other countries tend to be relatively less informed about New Zealand’s macroeconomic conditions. Firms facing more competitors tend to know more about inflation, as do those facing steeper profit functions (which raise the value of information). Managers with better knowledge of the RBNZ’s inflation target also tend to follow news reports much more frequently and view news reports as important to their business decisions. The lack of knowledge about monetary policy on the part of many managers therefore seems to reflect a view that inflation plays a less important role in their business decisions.

Similar results in the US

Our results are not very different from those for the US, at least for the broader population. Data from the Michigan Survey of Consumers and the New York Fed Survey of Consumer Expectations yield similar patterns in inflation expectations to those we found for New Zealand. Using polling data for the US, Binder (2015) documents that the US public lacks knowledge about monetary policy. In particular, only one in every three Americans was able to correctly identify the chair of the Federal Reserve System. Very few were able to predict low levels of inflation when asked about inflation over next ten years. Nor did they appear to display much eagerness to learn about the Fed and monetary policy. In terms of social media, numbers of Twitter and Facebook followers of the Federal Reserve System do not appear remarkable. In fact, FBI, the CIA, and Paul Krugman, among others, have more followers than the entire Federal Reserve System. Google searches confirm this paucity of interest. Total online searches for macroeconomic variables like GDP, the unemployment rate, and inflation are consistently topped by online searches for puppies.

1 We report these from waves in which these are available.

Digitization of financial systems threatens to exclude the vulnerable, including women and the poor. But it doesn't have to. Pakistan may hold the answer to financial inclusion.