How data can help fight for peace and justice

The photographs are heartbreaking. Anguish etched into faces of people desperately attempting to find safety; except for those like two year-old Alyan Kurdi, lifeless on the shoreline, who paid the ultimate price searching for it. They offer a tiny glimpse into the nightmare millions face fleeing Syria. Seven million have relocated inside its borders; four million have sought refuge in Turkey and other neighboring countries. Some have continued on, risking everything for the dream of a better life in Europe. The flow of humanity will not stop soon, with another three million expected to attempt escape.

Syria is a mess, torn apart by a brutal dictatorship, moderate Syrian rebels, Kurdish separatists, and the savagery of the Islamic State (IS). Four years of fighting between the various groups has turned Syria into the largest refugee crisis. But Syria is not unique. Almost 60 million people sought asylum from conflict zones around the world in 2014, fifteen of which were started or re-ignited in the past 6 years. According to the UN Refugee Agency, it’s the largest number of displaced people ever and will likely continue trending higher unless peace and justice is found. What other chance do these people have to lead a normal life again?

Peace and justice is not only essential to ending wars and conflicts; it’s foundational to achieving the other Sustainable Development Goals. With the last 15 years as a guide, we know that ending extreme poverty is highly dependent on peace. According to the OECD, the 5 countries that did not progress on any of the Millennium Development Goals – the precursor to the new Sustainable Development Goals – all faced violent conflicts at some point between 2000 and 2015. Furthermore, research published by the Brookings Institute estimates that 75% of people still living in extreme poverty by 2030 will be located in war zones. If we want to eliminate extreme poverty by 2030, we must achieve peace.

If we want to eliminate inequality based on gender, ethnicity, and beliefs, we must achieve justice. Women and children are often targeted in conflicts – abused, raped, and killed. A UN official recently confirmed the existence of aprice list for child slaves published by IS, suggesting how heinous their treatment can be.  But it is wrong to assume this problem exists only in conflict zones; violence toward women and children is everywhere. The United States itself has an appalling track record – more than 200 people are raped every day – suggesting many countries need to invest in protecting the vulnerable. Ranked 94th on the global peace index, the United States has an opportunity to set an example by improving peace and security within its own borders over the next 15 years.

Shining a light with data

Data can help the fight for peace and justice. We can begin by making sure every person is counted. Amazingly, the births of more than 1 in 10 children under the age of 5 are not registered (see the figure below), according to data from the World Bank. In other words, they don’t officially exist and therefore lack basic human rights and protection. As basic as it sounds, one of the objectives of Goal 16 is to ensure the existence of every human being is recorded. Data, documenting a person, is a basic human right. 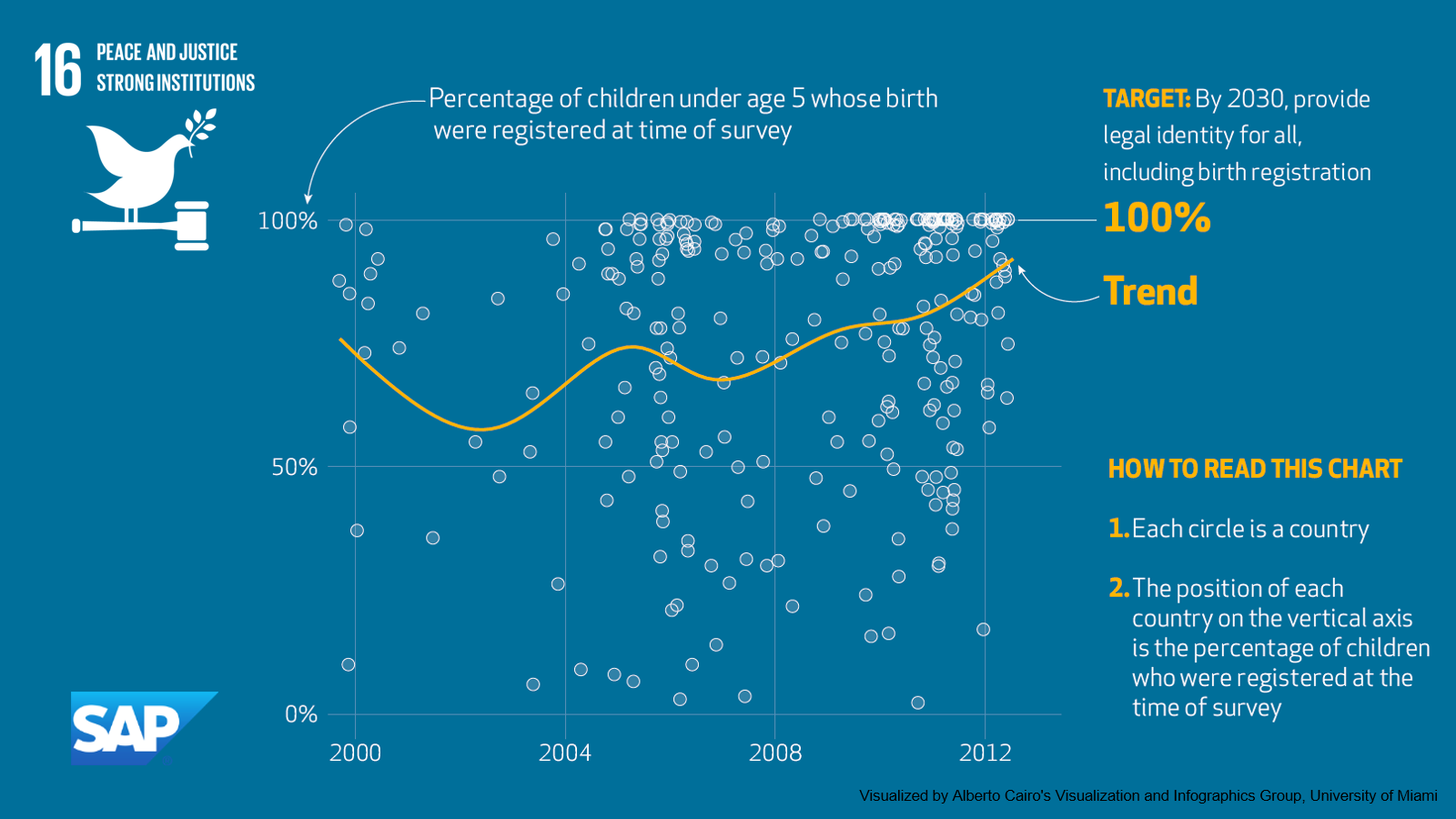 Data can also shine a light on violence and conflict helping us understand how to stop it. Research by the Justice Mapping Center in the United States shows that the home address of people sent to prison tends to be be highly concentrated in select parts of a city. For example, their research indicates:

By understanding the characteristics of people incarcerated or prone to violence, governments can invest in targeted programs to address the root causes.

Responsible for a country’s laws, justice system, and enforcement, governments naturally play a central role in bringing about peace and justice. But the private sector also has a role to play. Every conflict depends on a supply chain for weapons and other goods. Governments attempt to stop such trade by placing export controls on certain countries; corporations can contribute by ensuring their goods and services are helping resolve conflict, not exacerbate it.

For some conflicts around the world, private sector supply chains are the cause. For example, all of the electronics we use depend on tin, tantalum, tungsten, and gold. The Democratic Republic of Congo has one of the few rich deposits of ores needed to produce these metals. Given the explosion of electronics devices the world uses, it’s a huge asset to improve the well-being of Congo. However, weak government and strong rebel groups have caused the opposite to happen; these valuable minerals instead fuel conflict and violence.

The problem is so bad that the United States and others demand companies to verify and prove their manufactured goods do not use minerals from Congo or other conflict zones. With the help of solutions like SAP Product Stewardship Network, companies can ensure their supply chain is using responsibly sourced materials. Stopping the purchase of minerals from conflict zones stops the funding of rebel groups and the destruction they cause.

As our world shrinks with every newborn child, and with every newly integrated supply chain, finding a way to live in peace and harmony is our only hope for survival. We can all help – nations, governments, corporations, individuals – to stop the nightmares for so many and help them dream once again.

This article is published in collaboration with SAP Community Network. Publication does not imply endorsement of views by the World Economic Forum.

Author: David Jonker is director of Big Data at SAP, and is responsible for the go-to-market initiatives across SAP’s data management and analytics platforms.

Data is the new gold. This is how it can benefit everyone – while harming no one

A new World Economic Forum paper highlights how businesses can use data to generate top-line value while preserving privacy and stakeholders' interests.

We need to talk about big data and genomics. Here's why – and how

Here are 4 major bike-sharing trends from China after lockdown