The IMF and World Bank meeting in Peru’s capital Lima could not have come at a more appropriate time and place.

The recovery in the global economy is slower than most people have expected. Increased uncertainty about the growth model in China, lower commodity prices and market pressure building up ahead of rate hikes in the US are all hitting Emerging markets economies in general , while worries seems to be particularly strong about Latin America. 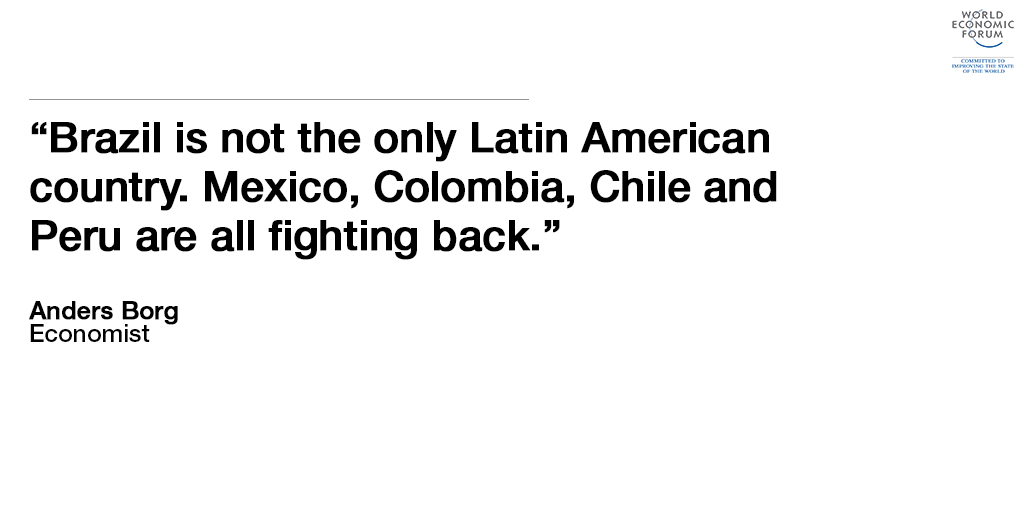 I will argue the opposite case. There are real problems, but to my mind the Latin Americans are fighting back and putting up a strong defence team. Brazil may be experiencing deep problems, but Mexico, Colombia, Chile and Peru are in better shape.

Make no mistake, the uncertainty about the growth model in China is real. To transform an economy with more than a billion people from an investment-lead export model to a sustainable path built on stronger growth based on domestic productivity based is not a trivial task. The opaque Chinese financial system makes it very difficult to assess how significant the over-indebtedness problem really is when it comes to state-owned enterprises and local governments. These are real challenges and the Chinese will need to reinforce their efforts to implement structural reforms. The world will have to adjust to a China that is growing 4-6% instead of 10% and that is using substantially less natural resources.

It is also true that financial markets are likely to be turbulent the coming months. Eventually, the Fed will hike interest rates even if inflation pressure is low. All major central banks have been flooding the global financial system with quantitative easing, pushing yield searchers out to emerging market countries: now the markets are thin on liquidity and long on herd behaviour.

The latest financial stability report from the IMF, presented in Lima, is very interesting on this point. As late as the Davos meeting back in January there was a heated debate between bankers and regulators on liquidity. Bankers argued that the liquidity problem in the markets was real and that the new regulatory environment could have contributed. The regulators pushed back and denied any link between low liquidity and tighter regulations. Now the IMF clearly states that low liquidity can amplify market volatility and become a critical factor during periods when the stress level is increasing. The IMF argues that it is too early to draw the conclusion that regulatory reforms that have restricted the traditional role of investment banks as market makers have contributed to liquidity shortage, but also makes it clear that authorities should watch the development very carefully and be ready to take action.

At the time of the IMF meeting in Lima there are real challenges for Peru and the other Latin Americans. But they are fighting back. The overall policy response is a textbook example of prudent policy. China has been over-consuming natural resources. For oil, iron ore and copper, demand will be weaker going forward.

The first line of defence when a country is hit by a severe terms of trade shock is to let the currency depreciate substantially. It is simply not possible to compensate for a terms of trade shock of this size without letting the currency depreciate. The central banks in Latin America have not wasted credibility and foreign currency reserves in a futile fight against a necessary adjustment. To try to defend an unsustainable exchange rate would have forced the central banks to implement rate hikes when growth is clearly slowing and unemployment is increasing. The Finance Minister of Colombia, Mauricio Cárdenas Santa María, has, as if scripted from a macro text book, argued that depreciation is a rational response to lower commodity prices and slower global demand. I think, however, that it would a mistake to signal that interest rates are on a pre-determined path upwards. Growth is slowing and the labour market deteriorating. This will mean that inflation will be contained by weaker demand in the second round.

Lower commodity prices are taking their toll on public finances. Deficits will increase when revenues from the extractive industries dry up. The policy response has once again been very reasonable. The Mexican Finance Minister Luis Videgaray clearly argues that it is necessary to be cautious. In Mexico, government expenditures will be reduced by almost 0.7% of GDP this year and an additional 0.8% in 2016, with a combined fiscal effect of 1.5% of GDP.

You could argue that fiscal policy should accommodate slower growth, but it seems wise to sail into strong headwinds with a prudent strategy. A major source of resilience in Mexico, Colombia, Peru and Chile are their strong public finances. The IMF is forecasting a deficit in the government sector for 2015 of around 4% for Mexico, about 3% for Colombia and Chile and slightly below 2% for Peru. Mexico and Colombia has gross debt of around 50% of GDP and Peru and Chile around 20% of GDP.

To preserve yours buffers is prudent. Things can get worse than expected. It is better to let the exchange rate depreciation provide the stimulus than to take the risk that a rapid slowdown of revenues undermining the credibility that is so important if things really get though.

A key factor in a period of slower growth is to deal up front with social cohesion. Lower growth will put a break on poverty reduction. Alonso Segura Vasi, the Finance Minister of Peru, therefore argues that it is important to reinforce measures to support the weakest groups in society when growth is slowing. The obvious choice is to reinforce the efforts on the education side. It is clear that Latin American countries are under-spending on education and that this has contributed to their weak productivity performance. Not even Chile, that has been ticking most other boxes when it comes to good economic policy, is performing well on education. The crises can be used as a lever to push forward with necessary reforms to increase efficiency. If there is any money available, this is the area to spend it.

It is also possible to safeguard social cohesion without undermining the fiscal position. One obvious alternative is to reinforce financial inclusion efforts. If telecommunication companies, banks and regulators are brought together and administrative barriers are reduced, access to the financial system can be opened to rural areas and to people who have previously been unbanked. Access to a secure way to store and transfer money for groups in rural areas dependent on the informal economy is an important step. To add consumer credits and access to credit for small and medium companies naturally follows. For the work that I’m doing in the Initiative for the Future of the Global Financial system at the World Economic Forum, financial inclusion is of key importance, and Latin America will be given a very high priority going forward.

There are other pro-poor reforms that are even more important to implement during a period of economic slow-down. After a substantial currency depreciation there is a risk that inflation increases. An accelerating inflation rate can exacerbate the impact of the crisis. If the central bank is forced to hike rates to prevent inflation expectations getting stuck on a higher level, that will further reduce growth. One important vehicle to alleviate inflation pressure is deregulation of the domestic economy. Increased competition can reduce oligopolistic mark-ups and reduce costs for consumer goods that are particularly important for low income earners.

It would be very rational to reinforce efforts to reduce the barriers of entry into the retail sector and particularly the food industry that carry great weight in low income earners consumption baskets. Given that the regulatory burden is very high in many Latin America countries, this a low-hanging fruit that should be dealt with. A crisis should be used to leverage necessary structural reforms.

Brazil is not the only Latin American country

You can’t get around that there are obvious problems in Latin America. Brazil is the largest economy. In Brazil inflation is high, the current account deficit substantial, the fiscal position is weak and the government is clearly far behind the curve. The IMF is forecasting -3% GDP growth this year and -1% next year, inflation is running at 9% in 2015 and will be close to 6% next year. The Real has been hammered by the foreign exchange markets. When iron ore, oil and soya beans are in free fall it is not surprising that Brazil is getting bad headlines, but the fact that the government has been forced to do a 180 degree U-turn on its election platforms and is ridden by corruption scandals doesn’t really help.

The finance minister Joaquín Levy is doing his best to deal with the situation, but without a real mandate from the voters a government will always fall short. Brazil is paying a high price for the previous willingness to substitute prudent macro policies and real structural reforms with populist rhetoric and short-term cover -ups.

But Brazil is not the only Latin American country. Mexico, Colombia, Chile and Peru are all doing better. When I listen to Videgaray, Cardenas, Segura Vasi and Rodrigo Valdes in Lima I hear a tone of prudence and pragmatism. The message is clear and they are, at least so far, walking the talk. Latin America is fighting back and they have a strong defence team.

Leaving Lima and the IMF meeting it can be good to put the current turmoil in perspective. In 1990 we had almost 3 billion people in extreme poverty and something like 1 billion consumers in the world economy. After 25 years of unprecedented growth rates in emerging market countries, the global economy has close to 3 billion consumers and fewer than 1 billion people in extreme poverty (700 million, according to the latest World Bank data).

At the current rate, when the number of people in extreme poverty is decreasing by 50 million per year, we will eradicate extreme poverty in slightly more than a decade. In 1990, more than half of the global population was living in extreme poverty, today it is 10% of the population. Even after the IMF has slashed its growth forecasts for 2016 there are more than 3.4 billion people living in countries with a growth rate above 5%. Let’s remember that at a 5% growth rate GDP is tripling in two decades. The world is transforming, and emerging markets are still emerging.

Author: Anders Borg is a Swedish economist and politician who served as Minister for Finance in the Swedish Government. He is the Chair of the World Economic Forum’s Global Financial System Initiative.

Image: People play in the middle of a fountain at a fountain park in Lima August 6, 2009. REUTERS/Pilar Olivares