Who are the top LGBT executives?

The key to stopping Alzheimer's, according to Bill Gates

On October 20th, OUTstanding and the Financial Times published their list of of the top 100 LGBT executives.

Lloyd’s CEO Inga Beale tops the list, making her the first female executive to take the number one spot. Openly bisexual, Beale is also the first woman to take the helm of Lloyd’s of London in the insurance market’s 327-year history.

The list is compiled by a judging panel based on four criteria:

The value of LGBT and Ally leadership is far-reaching for businesses, as well as LGBT employees.

As many as 62% of LGBT graduates born between 1980 and 2000 return to the closet when they start their first job, and 70% of those in the closet at work are likely to leave their job within the first three years. According to OUTstanding, a network for LGBT professionals, 85% of those polled said that non-inclusive workplaces have a negative impact and damage productivity. Allies are defined as executives who work to make life better for their LGBT employees.

A list of the top Allies and Future Leaders has also been released. 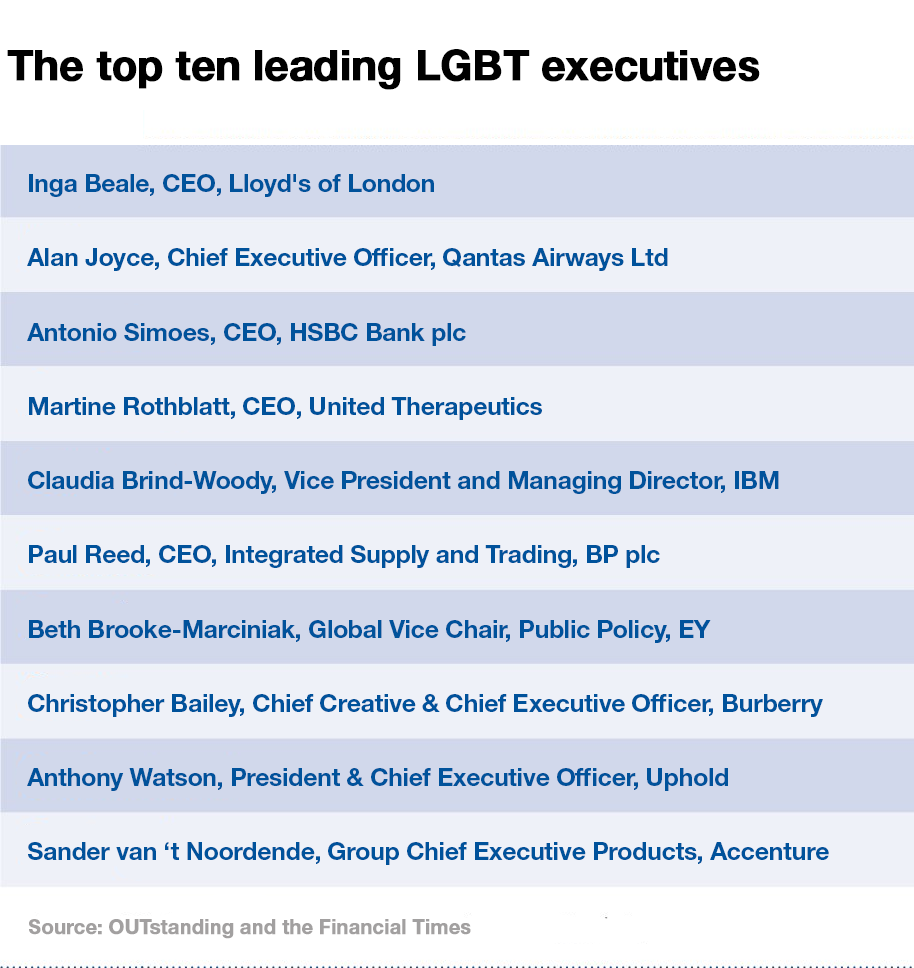 Have you read?
Which countries have the best LGBT laws?
These are the 10 most gay-friendly countries
Leaders standing up to the LGBT bullies

Author: Donald Armbrecht is a freelance writer and a social media producer.

Image: A man holds a flag as he takes part in an annual Gay Pride Parade in Toronto. REUTERS/Mark Blinch

Marian Croak on what it takes to innovate, why kids are an inspiration and how not fitting in can be an advantage.

By embracing stakeholder capitalism we will break down the barriers that prevent women from fully participating in the economy and revive the middle class.

The state of women’s leadership in 5 statistics

Are countries doing enough to support women through the pandemic?