The world’s cities are in dire need of innovation as they struggle to cope with unprecedented growth, which is expected to result in an extra two billion city-dwellers by the year 2050. In response to this need for better use of technology to improve urban environments, drive economic growth and inclusion and improve social cohesion, the World Economic Forum’s Global Agenda Council on the Future of  Cities publishes today its Top 10 Urban Innovations.

From intelligent street lamps to trees hooked up to social networks, the Top 10 Urban Innovations chronicles the best examples from around the world of how cities are creating innovative solutions to a variety of problems. To create the list, the Council drew on its experiences and networks working with city leaders around the world to select those that have had the most impact. Ranging from the high tech to the simple, and from the game changing to the subtle, they all have the power to transform industries, improve the environment and fundamentally change the way we interact with the urban fabric: 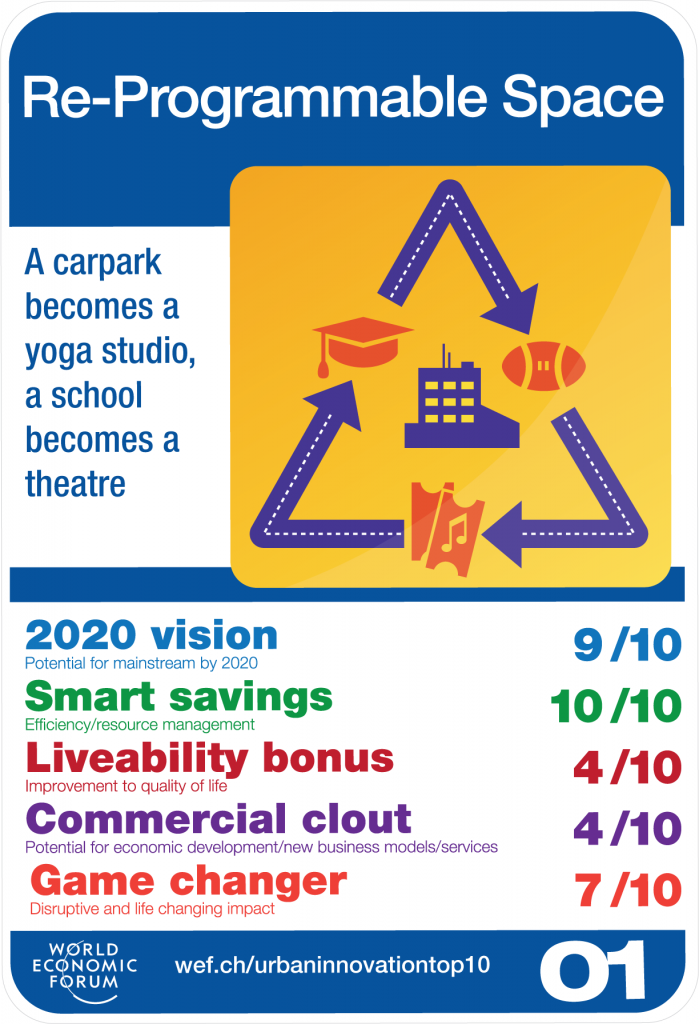 2. The waternet: an internet of pipes. Smart sensors in water pipes are already helping reduce water loss and manage floodwater. Soon they will be able to monitor health and detect outbreaks of infectious diseases too. 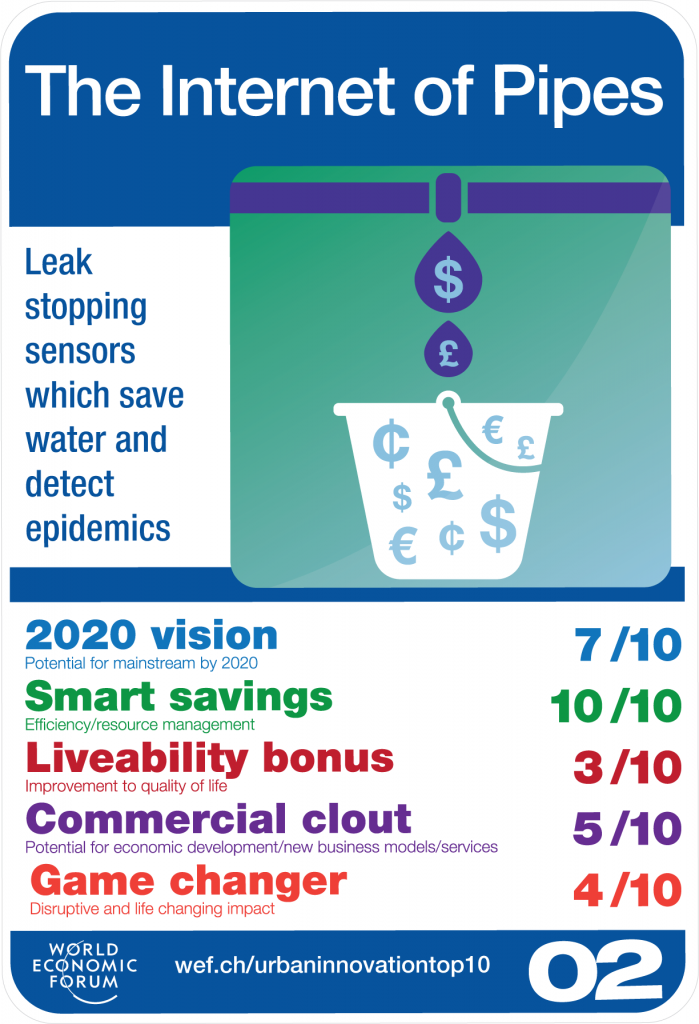 3. Adopt a tree through your social network: connected trees that fight climate change. With studies suggesting that 10% more green space in a city could compensate against temperature increase caused by climate change, Melbourne’s scheme to encourage citizens to adopt trees by giving each of them their own email address is proving wildly popular. 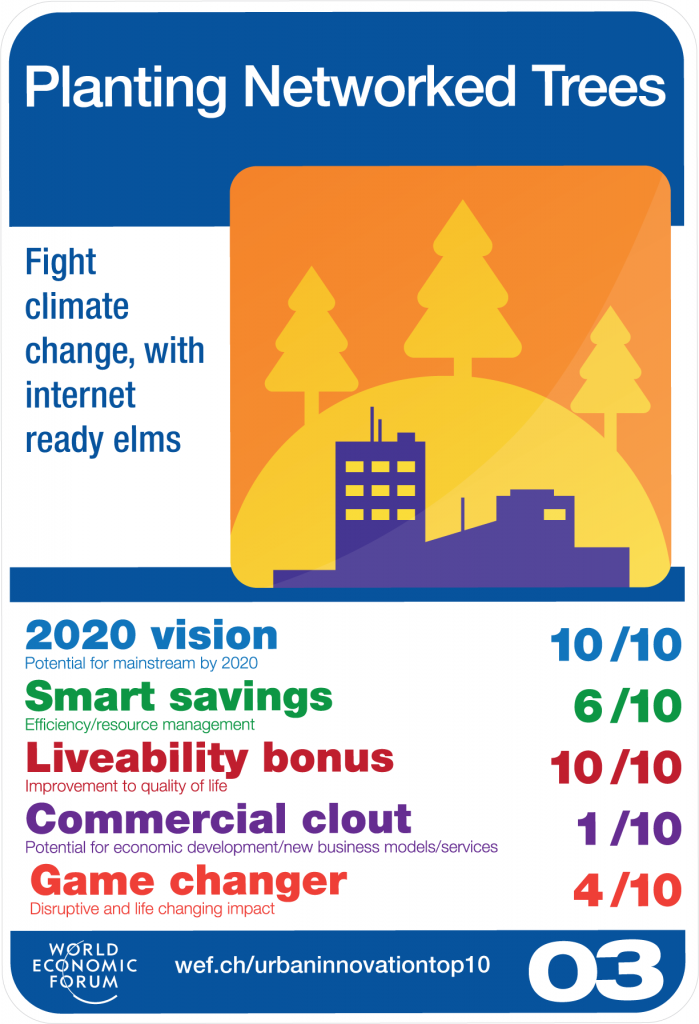 4. Augmented humans. The next generation of mobility: small investments in cycle-friendly schemes already return $35 for every dollar invested. Schemes such as MIT’s Copenhagen Wheel, which encourages cyclists by allowing them to augment pedal power with energy captured when going down hills or breaking, could tempt even more drivers to ditch their cars. 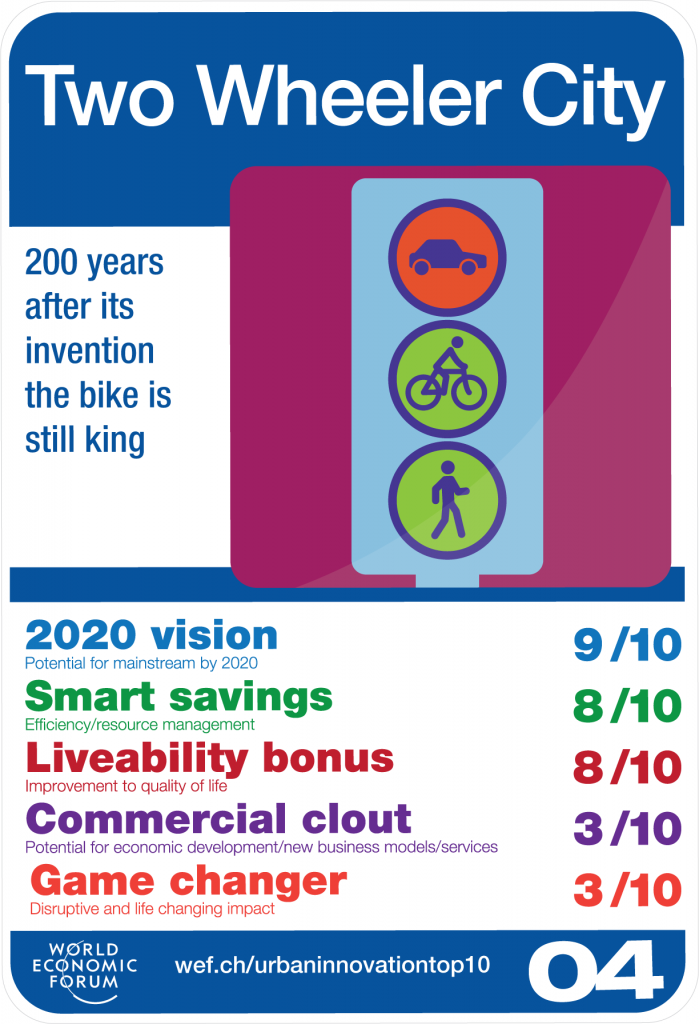 5. Co-co-co: co-generating, co-heating, co-cooling – This ‘tri-generation’ concept refers to the use of wasted heat from power plants for co-generation (re-using in electric generation) as well as heating and cooling of buildings. Next up is quadgeneration, which will do all of the above plus capture CO2 and reuse it in industrial and horticultural processes. 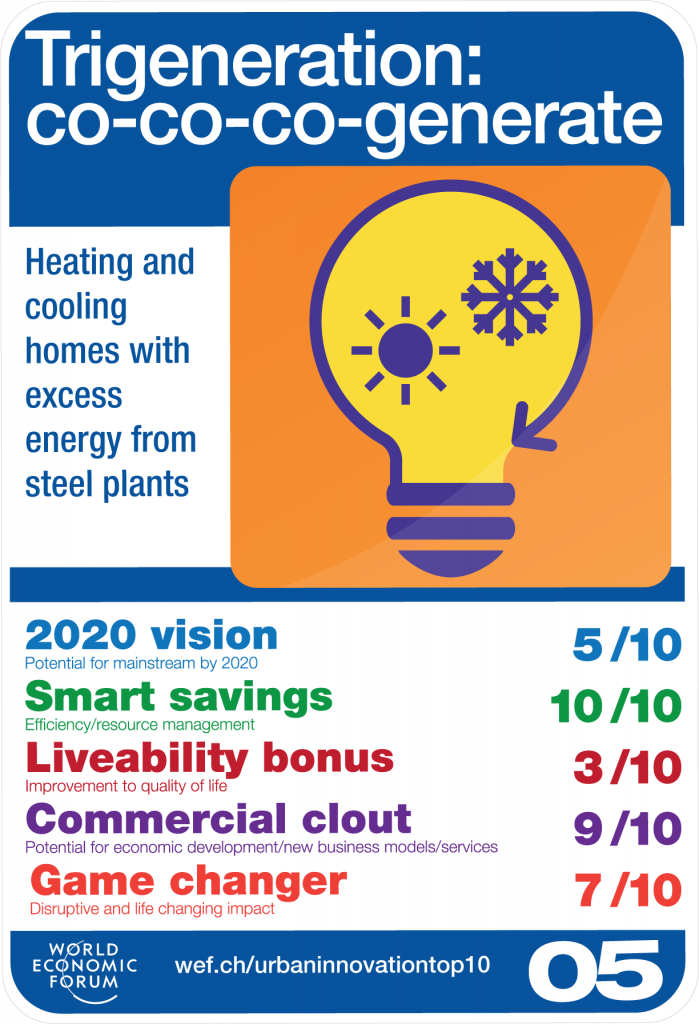 6. The sharing city: unleashing spare capacity. ‘Take, make, consume and dispose’ is out; caring and sharing is in. With Airbnb already helping reduce wasted capacity in cities, and car-sharing clubs doing the same with transportation, we’re increasingly seeing sharing of facilities and even co-locations. 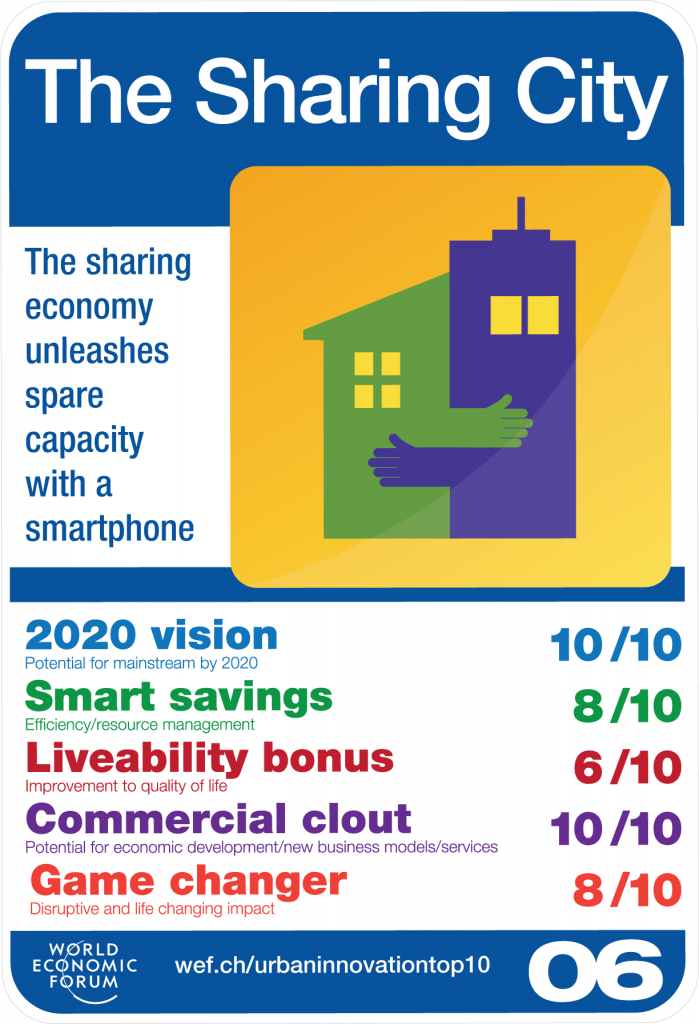 7. Mobility-on-demand: a menu of personal mobility. Congestion carries a price tag of $60 billion a year in the US alone, but the proliferation of real time data on traffic flows is enabling new ways of managing this by routing drivers via less crowded thoroughfares. When driverless cars hit the roads, the line between public and private will be blurred further, as cars take on numerous journeys rather than sitting idle in the car park all day. 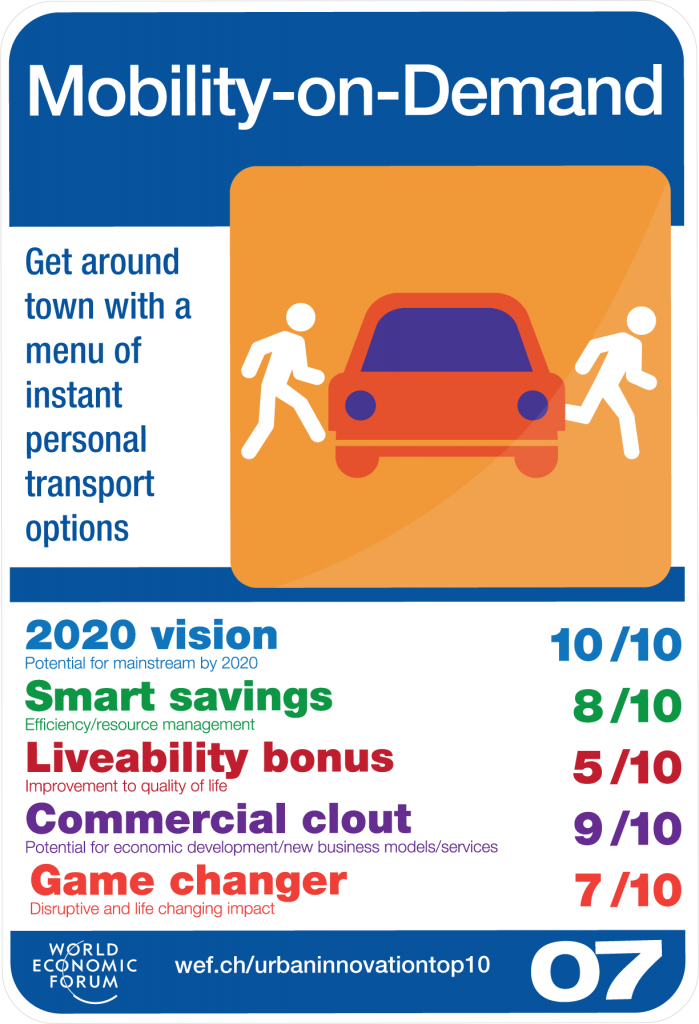 8. Medellin revisited: infrastructure for social integration. Progressive architecture and urban planning have transformed this Colombian city in little more than a decade. The introduction of an elevated cable car is emblematic of this revival, providing not just transport infrastructure but a vital link between the wealthy commercial districts and some of the town’s poorest neighbourhoods. 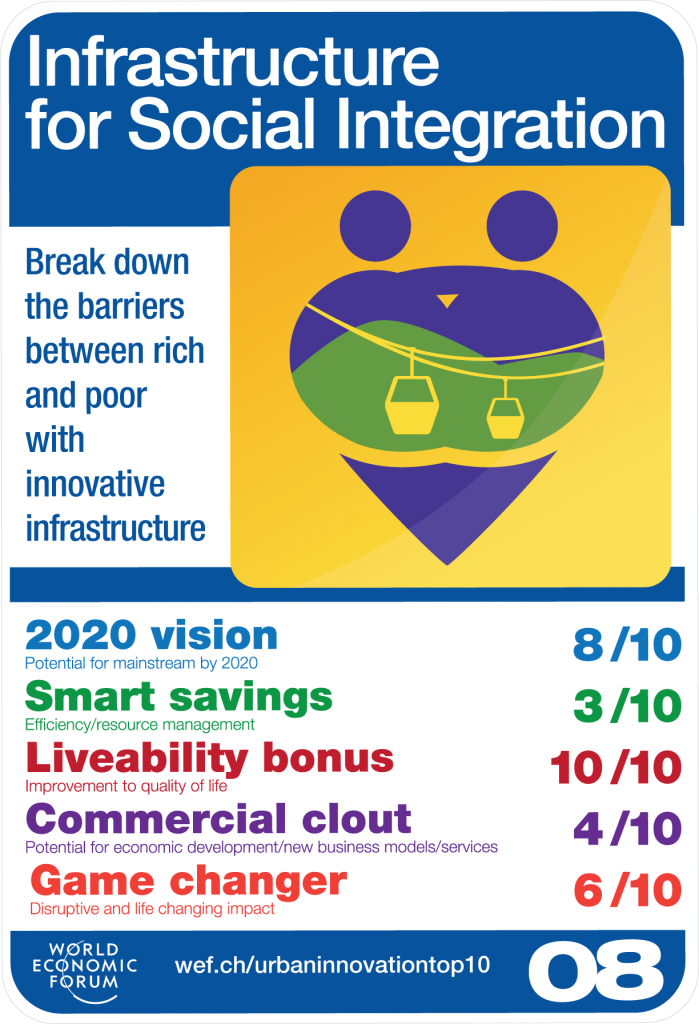 9. Smart array: intelligent street poles as a platform for urban sensing. Switching to LED is just a start of the lamp-post revolution: next generation designs will be able to monitor crime, available parking and even air pollution. 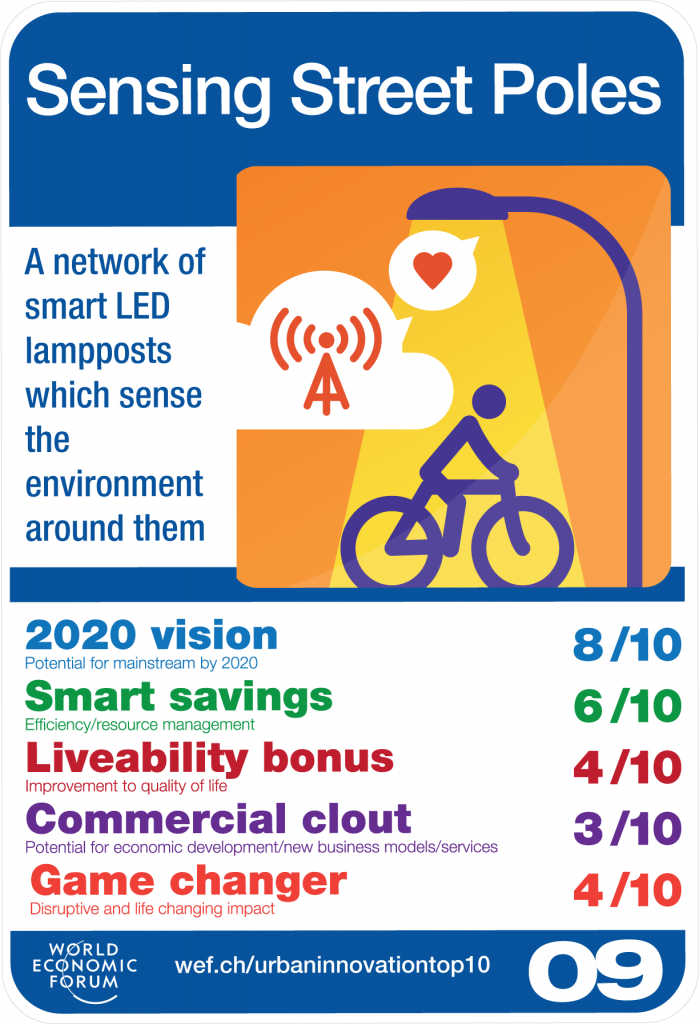 10. Urban farming: vertical vegetables. If 45% of vegetables are spoiled before they reach the farm in Europe alone (the figure is much higher in other parts of the world), why not move the farm to the city? Advances in LED lighting mean that food can now be grown in old cargo containers. And the beauty is they can be stacked, giving farmers 100 times more yield than traditional farms. 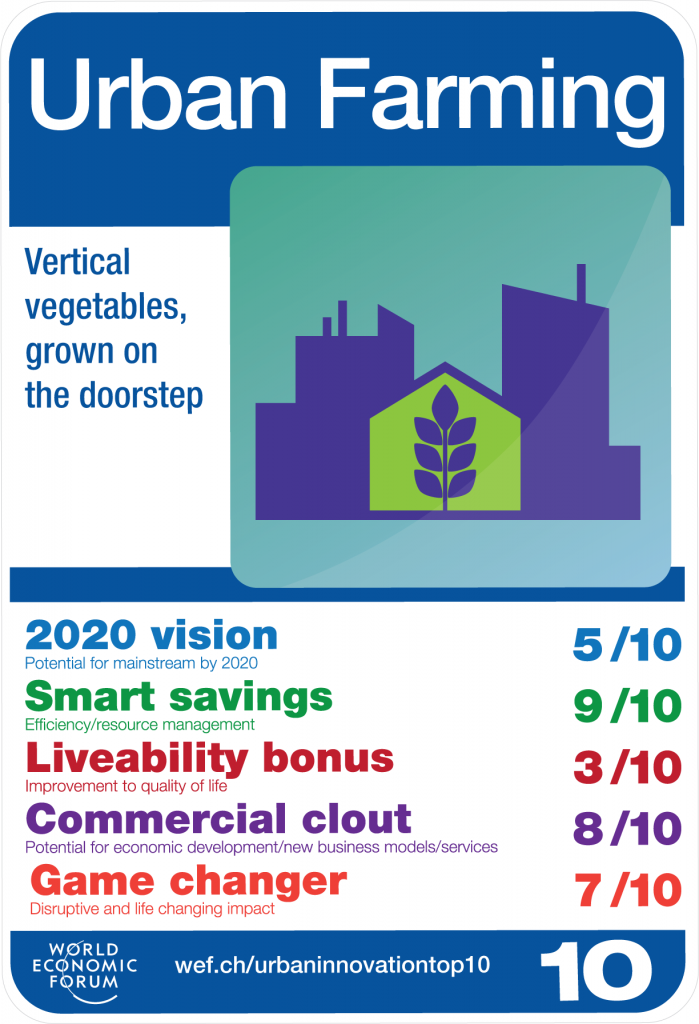 “Cities have always been repositories of innovation. Now, innovation itself is turning its focus on cities. Experimenting with urban space is the subject of the latest batch of successful start-ups across the world. As a result, cities are not just containers of innovation – but also content,” said Professor Carlo Ratti, Director, MIT Senseable City Laboratory and a member of the Council.

“It will be not one, but a gestalt of innovations, taken together and delivered via an intelligent network, that will have the greatest impact on cities,” said Anil Menon, Deputy Chief Globalization Officer, Cisco and Vice Chair of the Council.