What do minimum wages look like in sub-Saharan Africa?

Most countries in sub-Saharan Africa have adopted minimum wage laws. Although the sectors and the fractions of workers covered are small given the low rates of formality and urbanisation in the region, this is an important step because:

Thus, current experience with minimum wages in the region is relevant for analysts and policymakers as we look forward to possible redesign of regulation in the future.

Figure 1. Monthly minimum wages and GDP per capita in Sub-Saharan Africa (US$ PPP)

Sources: ILO Global Wage database, World Bank WDI
Note: Sample based on 21 economies, where the latest available data for each country was utilised. Wages are monthly and shown in current US$ PPP.

There is limited research on the employment effect of minimum wages in Sub-Saharan Africa. The most comprehensive literature in the region exists for South Africa and shows that while the introduction of minimum wages had a negative impact on employment in agriculture and to some extent in the clothing sector, no employment decreases were evident in all other covered sectors (Dinkelman and Ranchhod 2012, Bhorat et al. 2013b, Nattrass and Seekings 2014). Overall, analysis for the four SSA countries for which this question has been studied (Ghana, Kenya, Malawi, and South Africa) produces findings that are consistent with the broad summary of global research.

We reviewed employment estimated in the minimum wage literature to date. This includes the 98 papers reviewed in Neumark and Wascher’s (2007) work and 17 more recent studies focused on low- and middle-income countries not included in Neumark and Wascher (2007). Where a study produced elasticity estimates for more than one cohort of workers, we consider each estimate separately. But we only consider those estimates that were statistically significant, and it is worth noting that 55% of reported elasticity estimates reviewed were not statistically significant.

Figure 3 shows employment elasticities for low- and middle-income countries only. The median elasticity is -0.08, while the mean is -0.11 (these are shown as the horizontal broken lines in Figure 3). By and large, introducing and raising the minimum wage in lower-middle-income countries has a small negative impact, or no measurable negative impact. However, there is significant variation around this average finding. The employment elasticities are neither constant nor linear. Where increases in a minimum wage are large and immediate, this can result in employment losses, but more modest increases usually have little observably adverse effects on employment, and may have positive impacts on wages.

The data in Figure 4 clearly show that for most countries in the SSA region, non-compliance is widespread. On average, 58% of workers earn below the minimum wage legislated for them. This is compared to an average of 30% for the non-SSA countries in the figure. Figure 4 also highlights the cross-country differences in levels of non-compliance. In Zambia, approximately 36% of workers earn sub-minimum wages, while this rises to 80% in Tanzania. These numbers reinforce the picture provided by the Kaitz ratios above, where minimum wage rates were shown to be set high relative to average wages. 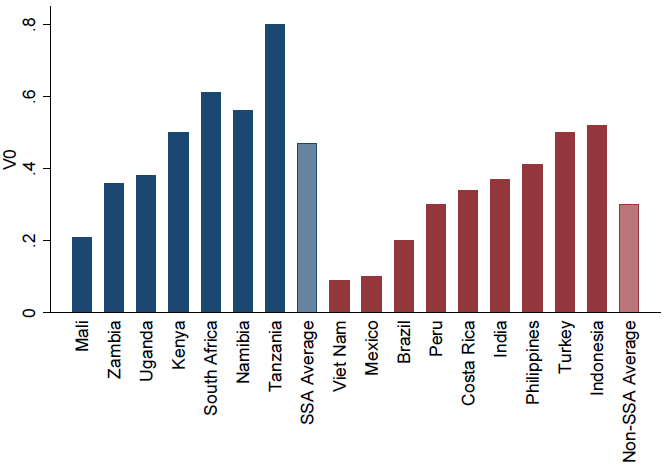 Our work provides an empirical overview of minimum wages in sub-Saharan Africa (Bhorat et al.2015). Minimum wages are relatively high, but non-compliance is relatively high as well, and perhaps for this reason the employment consequences of minimum wages are not particularly strong. It is evident that research in this area is still at a very early stage, and our first cut analysis is in essence attempting to craft the broad contours of the extent and nature of minimum wage setting on the continent. Whilst work on minimum wages is fairly mature in many OECD countries, our understanding of minimum wage policy and its impact in sub-Saharan Africa is not. This is in large part due to a severe lack of necessary data. The release of country-level earnings and employment data at regular intervals lies at the heart of a future, country-focused, minimum wage research agenda for Africa.

Images from space could bolster the global economy – here’s how