What is driving China’s investment in renewables?

The narrative around renewable energy sources is typically framed almost entirely in terms of their contribution to reducing carbon emissions and thereby providing a means to tackle climate change. From this perspective, the drive for renewables is inseparably linked to international negotiations over reducing carbon emissions, which will come to a head at the United Nations summit in Paris towards the end of this year.

But this framing of the story struggles to explain the rise of China as the world’s renewables superpower. It is investing more in renewable energy production and manufacturing of renewable energy devices than any other country. Is China making these huge investments – not to mention launching a national emissions trading scheme – purely to accommodate the world’s desire to see carbon emissions reduced?

This is the question that we address in our new book, China’s Renewable Energy Revolution, published this month.

Our argument is that China is motivated by much more immediate concerns. Because of the dominant role played by coal in its rise as the world’s largest manufacturing economy, China suffers from catastrophic air pollution, particularly the toxic mix of tiny particulate matter that penetrates deep into the lungs of people breathing the air of Beijing, Tianjin, or other major industrial cities. The issue has prompted anger and social agitation, with the public demanding that environmental laws be enforced. (See, for example, the explosive impact of the documentary Under the Dome, by investigative journalist Chai Jing.)

Yet the real problem for China in continuing on a “business as usual” pathway is that it would become increasingly dependent on imports of coal, oil and gas – and therefore grow more vulnerable to price fluctuations and sudden interruptions to supply. More pointedly, as a relative newcomer to the global fossil fuel market, China is forced to locate supplies from more and more unstable parts of the world, putting it at financial risk from war, revolution and terrorism even in distant lands.

These concerns over energy security, and the immediate issue of air pollution, are in our view likely to be weighing more heavily on the Chinese leadership than concerns about climate change.

Our view is that China is running into the limits of a predominantly fossil-fuelled expansion and now needs to find a new development pathway based on green growth and clean technology. This, we argue, is what lies behind its vast investments in renewables.

In per capita terms, China is of course not yet abreast of the developed countries in its overall energy consumption or its renewable energy use. But this is not evidence that China is going “light” on renewables; on the contrary, as a rising middle-level power, it still has plenty of room to grow its already large renewable energy industries.

Even though per capita use is still modest, the absolute size of the renewables investment in China allows new industries to scale up, which in turn leads to lower costs as efficiencies are captured. Through the principle of circular and cumulative causation, this leads to further market expansion and further cost reductions. The cost reductions then create opportunities for countries in the rest of the world to become involved in renewable energy as well.

China is already on the record in viewing its clean technology sectors as key drivers of future prosperity and export platforms. The 12th Five-Year Plan, which ends this year, set out the comprehensive goals for China’s economic development. It featured seven Strategic Emerging Industries (SEIs) that were earmarked for special promotion, including three industries closely related to the burgeoning energy transition: energy saving and environment protection; new energy sources; and new-energy-powered cars.

The plan laid out a target that production value-added from these seven SEIs should reach 8% of China’s gross domestic product (GDP) by 2015. This target has since been raised to reach 15% of GDP in 2020. There could be no clearer demonstration of how China views the link between building energy security, improving environmental protection and creating the export platforms of tomorrow. 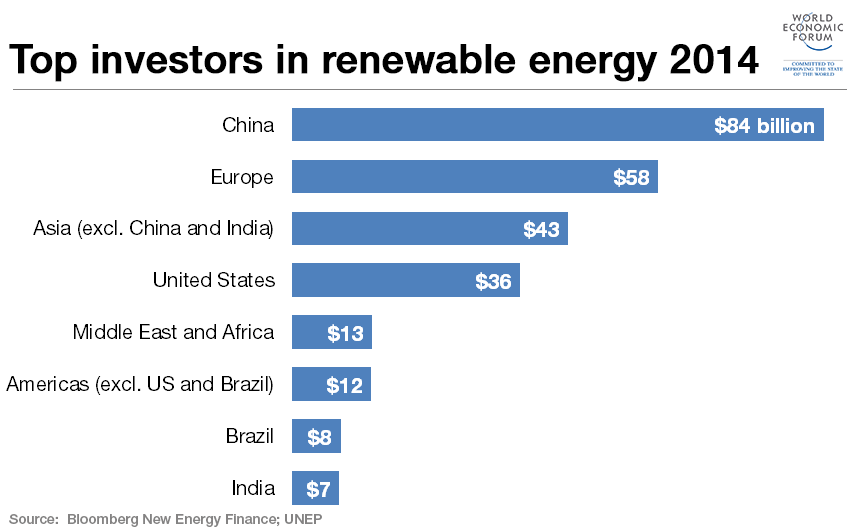 As we see it, China has a lot more riding on its renewables revolution than (just) climate change concerns. Important as these are, it is a profoundly convenient truth that the more China builds its export platforms around renewables, smart energy grids, and clean transport technologies such as fast rail and electric vehicles, the more it drives down its own carbon emissions and the costs of these clean technologies for everyone else.

The lesson for industrialised countries such as Australia is that renewables do not have to be framed solely as an issue of climate change and its mitigation. In keeping with the new emphasis of the Turnbull government on a 21st-century agenda, with the focus on tackling the challenges and seizing the opportunities created by industries of the future (such as renewables) rather than sticking with those of the past (coal), it is the business case that needs to be made.

China has shown very clearly that renewables make excellent business sense in the 21st century. Now it is up to Australian leaders, such as the new energy minister, Josh Frydenberg, and assistant innovation minister, Wyatt Roy, to act on the same understanding and help build – finally – a great renewables industry in Australia.

Author: John Mathews is a Professor of Strategic Management at the Macquarie Graduate School of Management. Hao Tan is a Senior Lecturer at the Faculty of Business and Law, University of Newcastle.

New report 'Natural Climate Solutions for Corporates' provides guidance for the private sector on how to scale-up investment to help tackle climate change.

Market design is a powerful economic tool to create and refine marketplaces and exchanges to improve the allocation of scarce resources such as water.

Why the future of carbon should be blue