The Bank of International Settlements has just released its latest international banking statistics, which run until the end of June 2015, and they make for some pretty horrible reading.

Cross-border lending fell by $910 billion (£589 billion), an enormous slump, and the largest since the fourth quarter of 2008, the worst bit of the global financial crisis.

BIS is often referred to as the central bank of central banks, collating information on financial flows around the world and trying to make sense of what’s happening on a global scale. According to today’s data, cross-bank lending retreated at the fastest pace in more than six years.

The period between Q1 2014 and Q1 2015 was the strongest run since the crash, with a (very small) contraction recorded in only one quarter, and decent growth in the others.

Then it fell off a cliff: 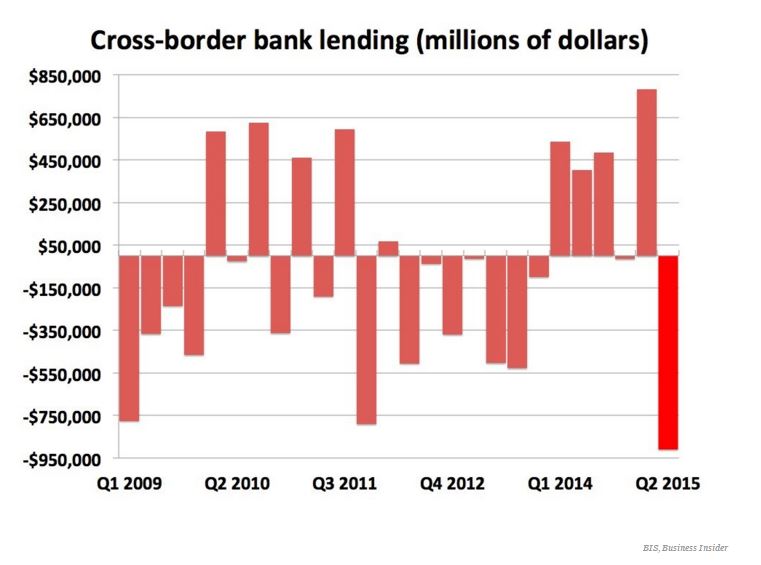 There’s a precise definition of cross-border lending from BIS, which the crucial definition being “when the ultimate obligor or guarantor resides in a country that is different from the residency of the reporting institution.”

The longer timeframe also offers some perspective on the post-crisis period generally, showing how small the increases in cross-border lending have been, when it’s increased at all.

That’s in stark contrast to the years leading up to the crisis, when lending across borders exploded: 10 of the 16 quarters from 2004 to the end of 2007 saw stronger growth than any single quarter since.

Taking a look even further back, to 1978, three more things become clear — firstly, cross-border lending has exploded in size over the last 40 years.

Secondly, the figures show just how strange the period since the crisis is, interrupting decades of growth (with some interruptions in the early 1990s). And finally, it shows that Q2 2015 was the worst quarter ever, other than Q4 2008.

That doesn’t say anything positive about what’s going on in the global economy at the moment.

In the West African country, 94% of its 1.5 million high school students pay their tuition via mobile money.

How will we fund the shift to a more sustainable future? 4 experts explain